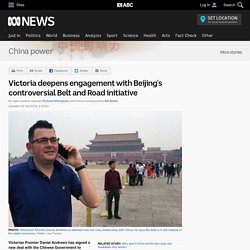 The deal has angered some in the Morrison Government who are worried about Chinese influence in Australia, but the Premier, who is a frequent visitor to China, says the deal is designed to boost the Victorian economy and jobs. So, what is this new deal? It's technically a non-legally binding agreement for Victoria to be involved in the Belt and Road project; the Silk Road for the 21st century that includes new ports, highways and railways across the globe.

It is essentially a commitment by Victoria to work together with Beijing on future projects for the benefit of both parties. Mr Andrews will co-chair a group that will meet half yearly. But it also encourages Chinese infrastructure firms to establish a presence in Victoria and to bid for major projects. Belt and Road Economics: Opportunities and Risks of Transport Corridors. About the Authors Michele Ruta, Team Leader and Lead Economist, Macroeconomics, Trade & InvestmentMichele Ruta is Lead Economist in the Macroeconomics, Trade & Investment Global Practice of the World Bank Group, where he leads the work program on regional integration. 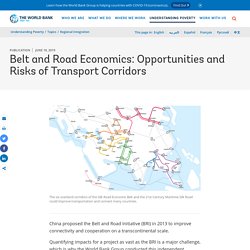 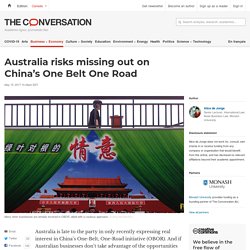 And if Australian businesses don’t take advantage of the opportunities available in this project now, there are plenty of regional competitors that will take their place. Australia became an unofficial OBOR partner in 2016, with the launching of a public-private NGO known as the Australia-China OBOR Initiative (ACOBORI), less than a year after the signing of the China-Australia Free Trade Agreement. Australia has so far declined China’s offer to formally link the Northern Australia Project to OBOR. However, more recently Trade Minister Steve Ciobo, has said he sees merit and opportunities for collaboration (particularly around the northern Australia initiative) arising from OBOR, adding the caveat that decisions about such collaborations would be taken “on the basis of what is Australia’s national interest”. 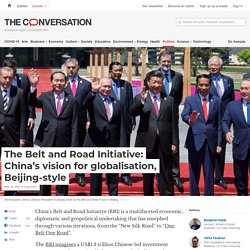 The BRI imagines a US$1.3 trillion Chinese-led investment program creating a web of infrastructure, including roads, railways, telecommunications, energy pipelines, and ports. This would serve to enhance economic interconnectivity and facilitate development across Eurasia, East Africa and more than 60 partner countries. First proposed in September 2013, it is the signature foreign policy initiative of Chinese President Xi Jinping. It is a project of unprecedented geographical and financial scope.

BRI has two primary components: the overland Silk Road Economic Belt (SREB), and the sea-based 21st-century Maritime Silk Road (MSR). The MSR is focused on developing key seaports that connect to land-based transportation routes. China's Belt and Road initiative and just what it means to sign on - China power. Updated 1 Dec 2018, 10:23amSat 1 Dec 2018, 10:23am More and more countries are choosing to ink agreements with China on its trillion dollar Belt and Road initiative, a global infrastructure push aiming to recreate the glory days of China's ancient Silk Road trade routes. 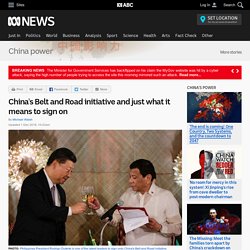 Key points: Building the Belt and Road for win-win development[1]- Chinadaily.com.cn. Editor's note: The Belt and Road Forum for International Cooperation (BRF) will be held in Beijing from May 14 to 15. 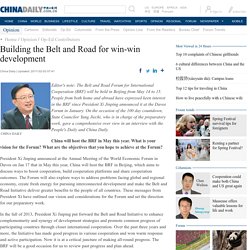 People from both home and abroad have expressed keen interest in the BRF since President Xi Jinping announced it at the Davos Forum in January. On the occasion of the 100 day countdown, State Councilor Yang Jiechi, who is in charge of the preparatory work, gave a comprehensive over view in an interview with the People's Daily and China Daily. China will host the BRF in May this year. What is your vision for the Forum? What are the objectives that you hope to achieve at the Forum? President Xi Jinping announced at the Annual Meeting of the World Economic Forum in Davos on Jan 17 that in May this year, China will host the BRF in Beijing, which aims to discuss ways to boost cooperation, build cooperation platforms and share cooperation outcomes. China's worldwide investment project is a push for more economic and political power. Inspired by the ancient Silk Road, China is investing in a massive set of international development projects that are raising concerns about how the country is expanding its power around the world. 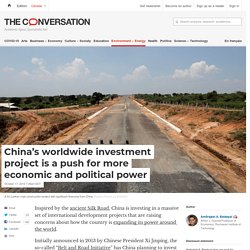 Initially announced in 2013 by Chinese President Xi Jinping, the so-called “Belt and Road Initiative” has China planning to invest in economic development and transportation in more than 130 countries and 30 international organizations. Projects range across Asia, but also include places in Africa, the Caribbean, Europe and South America. With a projected cost of more than US$1 trillion, it may be the most ambitious infrastructure project undertaken in human history. The country hopes it will all be completed by 2049, the 100th anniversary of the founding of the People’s Republic of China.

My research in international economics with particular reference to China shows that Beijing has both economic and political plans for how these investments will pay off. Economic effects Political payoffs. Panel Discussion: Debating China’s Belt and Road Initiative. Announced in late 2013, China’s Belt and Road Initiative (BRI) is both a colossal infrastructure development scheme and a grandly ambitious undertaking of geostrategic proportions. 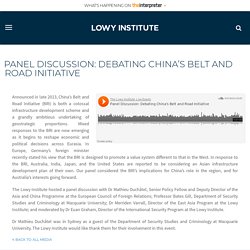 Mixed responses to the BRI are now emerging as it begins to reshape economic and political decisions across Eurasia. In Europe, Germany’s foreign minister recently stated his view that the BRI is designed to promote a value system different to that in the West. The next phase of the Belt and Road: Podcast out now. After Malaysia became the first country to tear up its corruptly overpriced BRI deals in 2018, this year has seen a shift in the rhetoric around China’s grand strategy. 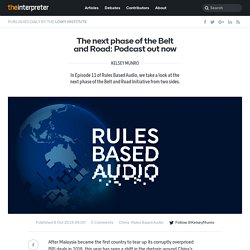 The second phase of the Belt and Road Initiative is shifting focus from grand infrastructure projects like ports and rail to “soft infrastructure” like special economic zones and people to people exchanges. This shift in emphasis has been largely driven by economic considerations, but also follows foreign criticism about debt-trap diplomacy, and local concerns in BRI partner countries about corruption, imported jobs and environmental issues. The new BRI, China says, will be “lean, clean and green”, and continue to be a “win-win” deal for partner countries. Understanding China’s Belt and Road Initiative. The focus on high-speed rail also illustrates Beijing’s goal of gaining acceptance of Chinese standards. 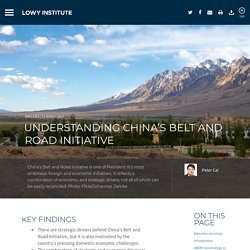 If countries across the region accept Chinese high-speed railway technology as their national standard, it could become the de facto standard across a vast geographical area. This means Chinese manufacturers and suppliers would enjoy a strong, first-mover advantage over other competitors, especially Japanese producers of high-speed rail. In a policy document released by the MIIT on the development of the transport industry, the high-speed rail sector is expected to play a leading role in encouraging high-end Chinese industrial exports. It estimates the market for transport equipment to be around $263 billion by 2018.

More From Our Experts Some analysts see the project as an unsettling extension of China’s rising power, and as the costs of many of the projects have skyrocketed, opposition has grown in some countries. Meanwhile, the United States shares the concern of some in Asia that the BRI could be a Trojan horse for China-led regional development and military expansion. Under President Donald J. Baker mckenzie belt road report 2017. China’s ‘One Belt, One Road’ initiative. Geoff Wade, Foreign Affairs, Defence and Security Key Issue The ‘One Belt, One Road’ (OBOR) initiative is a Chinese economic and strategic agenda by which the two ends of Eurasia, as well as Africa and Oceania, are being more closely tied along two routes–one overland and one maritime. Supporters suggest that the initiative permits new infrastructure and economic aid to be provided to needy economies. Critics claim that it facilitates Chinese economic and strategic domination of the countries along these routes.

OBOR provides a global context for China’s growing economic links with Australia. Chinas Belt and Road Initiative in the global trade investment and finance landscape. China’s Massive Belt and Road Initiative. Understanding China’s Belt and Road Initiative WEB 1. One Belt, One Road, One Big Mistake. The headlines coming out of this year’s APEC conference in Papua New Guinea focused on the conflict between America and China that kept the forum from issuing a joint communiqué. Less noticed were two short memorandums released on the sidelines of the conference by the island nations of Vanuatu and Tonga. China’s One Belt, One Road: Will it reshape global trade? The future of trade in Asia could depend heavily on what becomes of China’s expansive One Belt, One Road initiative, which calls for massive investment in and development of trade routes in the region. In this episode of the McKinsey Podcast, recorded in May, McKinsey senior partners Joe Ngai and Kevin Sneader talk with Cecilia Ma Zecha about One Belt, One Road—what it really means, what it needs to become a reality, and why people should take it seriously.

Podcast transcript Cecilia Ma Zecha: Hello, and welcome to this edition of the McKinsey Podcast. I’m Cecilia Ma Zecha, an editor with McKinsey Publishing, based in Singapore. China’s ‘One Belt, One Road’ initiative.