Harry/Multi or Harry/Harem fics, anyone?: hp_ficsearch. Harry and Draco magical bond + Mentor Snape: hp_ficsearch. Searching for a fic; pretty sure it's set in first year. 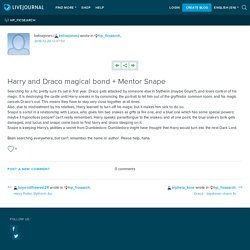 Draco gets attacked by someone else in Slytherin (maybe Goyle?) , and loses control of his magic. It is destroying the castle until Harry sneaks in by convincing the portrait to let him out of the gryffindor common room, and his magic cancels Draco's out. This means they have to stay very close together at all times. Dark!Harry raised by Voldemort: hp_ficsearch. 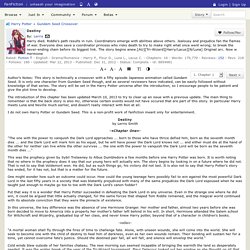 It is only one character from Gundam Seed though, and as several reviewers have indicated, can be easily followed without knowledge of that series. The story will be set in the Harry Potter universe after the introduction, so I encourage people to be patient and give the plot time to develop. Banished Destiny Chapter 1: Prologue: A Daring Rescue by Banishment, a Harry Potter + Gundam Wing/AC Crossover fanfic. 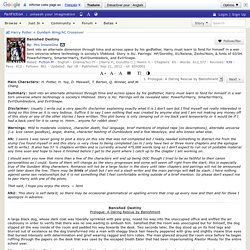 Potter, H. Yuy, D. Maxwell, T. Barton, Q. Veela Child, Moon Child Chapter 18: Confrontation, a harry potter fanfic. NOTE: Someone pointed out that the number of dead (44) did not match with the number of how many women, men, and children who died in the final attack. 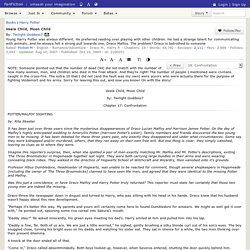 And they're right! The number of people I mentioned were civilians caught in the cross-fire. The extra 10 that I did not (and the fault was my own) were aurors who were actually there for the purpose of fighting Voldemort and his army. Sorry for leaving this out, and now you know! On with the story! Veela Child, Moon Child by: Twilight Goddess7 Chapter 17: Confrontation by: Rita Skeeter It has been just over three years since the mysterious disappearances of Draco Lucian Malfoy and Harrison James Potter.

In my head Chapter 17, a harry potter fanfic. I'm SO sorry for the long wait! 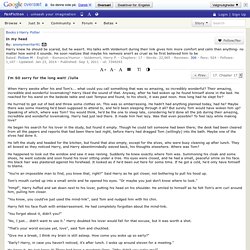 /Julle When Harry awoke after his and Tom's... what could you call something that was so amazing, so incredibly wonderful? Their amazing, incredible and wonderful lovemaking? Feels like the road to Hell - FrankieSpitfire - Harry Potter - J. K. Rowling. Finding Love, a harry potter fanfic. A/N- This is just a smutty little one-shot. 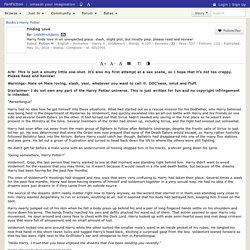 It's also my first attempt at a sex scene, so I hope that it's not too crappy. Please Read and Review! Warnings- Male on Male loving, slash, yaoi, whatever you want to call it. OOC'ness, smut and fluff. Disclaimer- I do not own any part of the Harry Potter universe. "Parseltongue" Harry had no idea how he got himself into these situations. Harry had soon after cut away from the main group of fighters to follow after Bellatrix Lestrange, despite the frantic calls of Sirius to just let her go. He didn't get far before a male voice with an undercurrent of hissing stopped him in his tracks, a shiver going down his spine.

"Going somewhere, Harry Potter? " Voldemort. The ones of Voldemort's meetings had stopped and new ones that were very confusing to Harry had taken their place. The source of the dreams didn't really matter right now to Harry anyway, as the wizard that starred in in them was standing very close to him. Breath. "P-Please... " Another Chance At Life Chapter 1, a harry potter fanfic. Alright, I know I should be updating all of my other stories, I know, but I adopted this little thing from Makayami Ookami, who is just great, btw. 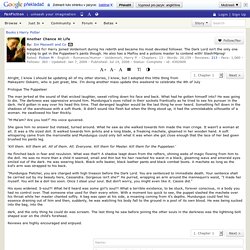 I'm doing another mass update this weekend to celebrate the 4th of July Prologue The Puppeteer The man jerked at the sound of that wicked laughter, sweat rolling down his face and back. What had he gotten himself into? A Change of Habits Chapter 6, a harry potter fanfic. For the record, when I began this story it was going to be a one-shot...don't ask how my twisted mind turned it into this really...I don't understand it myself...besides, as a writer I don't actually like this story all that much, it doesn't make sense to me- well I suppose it does in a very vague way but it has none of the structure my other stories have. 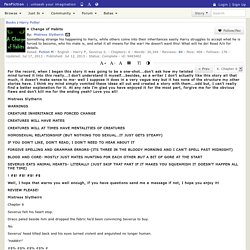 I think my mind simply vomited these ideas all out and created a story with them...odd but, I can't really find a better explanation for it. At any rate I'm glad you have enjoyed it for the most part, forgive me for the obvious flaws and don't kill me for the ending yeah? Love you all! Mistress Slytherin. Apocalypse Part I Chapter 1, a harry potter fanfic. Apocalypse By Julesmonster Disclaimer: All publicly recognizable characters, settings, etc. are the property of their respective owners. 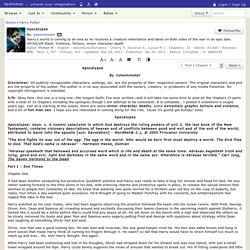 The original characters and plot are the property of the author. The author is in no way associated with the owners, creators, or producers of any media franchise. A Change of Habits Chapter 5, a harry potter fanfic. Not much to say except to say that this story is nearing it's admittedly short end, it's always sad when a story ends...this isn't one of the longest or the most fulfilling but it has been in my archive for a while...I hope you enjoy it! 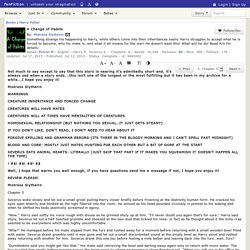 Mistress Slytherin Well, I hope that warns you well enough, if you have questions send me a message if not, I hope you enjoy it! Mistress Slytheirn Chapter 5 Severus woke slowly and let out a small growl pulling Harry closer briefly before frowning at the distinctly human form. 60 Years in a Summer Chapter I –Serpens Lynx Black–, a harry potter fanfic. Summary: One night, once a year, was more than anything else Tom ever had. This is the story of how two people destined to be foes were actually destined for something else Spoilers: with you don't know the books from HP, go read them! Disclaimer: I have no right to any character, they belong to JK Rowling. The only thing that is mine is the mistakes. Second chances Chapter 3, a harry potter fanfic. A.N. Heya just want to say thank you so much for all the reviews and comments you have made, it really does enourage to write more. Erm quick comments, Jajalang sorry for the confusion, Harry was held hostage by the Order for seven weeks, he is four and a half months pregnant, so around sixteen and a half weeks.

The idea is it happened during the normal end of year confrontation. The Dark Lord's Protector Chapter 5, a harry potter fanfic. After waking up from their nap, Harry carefully eased off of his Dark Lord. Kissing his forehead, Harry left to go get food. Walking into the kitchen he began gathering some simple food, like strawberries and grapes, some rolls and a variety of cold cuts and cheese. Turning the Tide Chapter 1, a harry potter fanfic. I am currently going through and editing this story for cohesiveness and other flaws in hopes of posting a sequel in the near future. Any suggestions are welcome! Harry fell back into his chair after leaving the pensieve. He was vaguely aware of Dumbledore's words echoing around the room. Talking on about how Tom Riddle had been breaking the rules and torturing others from a young age.

Tantum, a harry potter fanfic. Realization Chapter 2, a harry potter fanfic. A/N: Here is the part two that I promised you, all the reviews and favorites and alerts were wonderful motivation. I never knew how excited they could make me until I got them, so keep it up! It was a few hours later that Draco encountered Harry again, having spent said hours pondering the whole situation. Draco stopped in the kitchen doorway, staring at the stove where Harry was fixing something.

"We do have house elves, you know, Potter. " "I know," Harry said, turning away from the stove to face Draco. Draco took in Harry's appearance as he made his way into the kitchen, sitting at the table and watching the black haired youth. A Different Reality Chapter 16, a harry potter fanfic. "I was asked if I was interested in being Minister today," James said as he walked into the parlor.

A Baby! Chapter 7, a harry potter fanfic. Hello - here is chapter 7 of A baby. I hope that you all enjoy it. Many thanks to all of you who have taken the time to review and those of you who have put the story on an alert list. I have other stories on this site for those of you how are interested. Disclaimer as chapter 1. Pulling Harry of the bed Severus wrapped his arms around him and placed a gentle kiss on his forehead. Harry nodded and asked if they should return to the other room. Severus quickly pulled Harry back into his arms and muttered an apology. "I am sorry, Harry. " Around the fireplace were two single arm chairs and a two seater sofa with a large tea tray on the table in the middle.