News is an important way of notifying necessary information internationally. With a matter like freedom of speech, it is necessary to have a news collection to include many different articles because of censorship.

For my New’s collection, I made sure to include many articles of different subjects and perspectives revolving around the main idea of censorship within a multitude of countries and their affiliates of freedom of speech. For my first example, Jamal Kashoggi, a Saudi journalist based in the United States, was wrongfully murdered for criticizing the policies of Prince Mohammed, who had become the kingdom's de facto ruler. Saudi Arabia’s government attempted covering up Khashoggi’s murder; however, the United Nations was quick to spread surveillance footage of the crime committed on Turkish soil. Due to the censorship of Saudi Arabia, a man's life was taken for his right on US soil because of manifesting his first amendment right. This collection further intensified and strengthened my stance regarding freedom of speech. People should be allowed to express whatever they feel without censorship, as long as other people are not in jeopardy.

Jamal Khashoggi: All you need to know about Saudi journalist's death. Media playback is unsupported on your device On 2 October 2018, Jamal Khashoggi, a US-based journalist and critic of Saudi Arabia's government, walked into the country's consulate in Istanbul, where he was murdered. 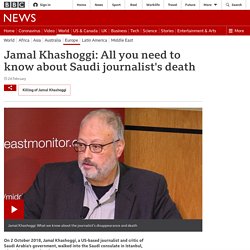 In the months since, conflicting narratives have emerged over who was responsible, how he died, and what happened to his remains. Saudi officials have said the journalist was killed in a "rogue operation" by a team of agents sent to persuade him to return to the kingdom, while Turkish officials have said the agents acted on orders from the highest levels of the Saudi government. In the latest development, a United Nations special rapporteur concluded that Khashoggi was "the victim of a deliberate, premeditated execution, an extrajudicial killing for which the state of Saudi Arabia is responsible". She also found there was "credible evidence" that Saudi Crown Prince Mohammed bin Salman and other high-level officials were individually liable. China activist who called Xi clueless on coronavirus faces years in jail for 'subversion'

A prominent Chinese activist detained for criticising President Xi Jinping’s handling of the coronavirus outbreak is being held on a state security charge that carries a maximum sentence of 15 years in jail, his friends said on Sunday. 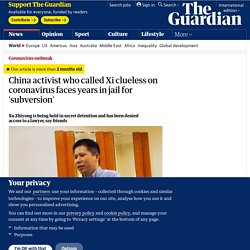 Xu Zhiyong, a former law lecturer and founder of the social campaign New Citizens Movement, was taken away by police on 15 February during a fresh crackdown on freedom of speech precipitated by the coronavirus crisis. Xu’s family found out from Beijing police on Saturday that he has been held in secret detention on the charge of “inciting subversion of state power” and has been denied access to a lawyer, according to friends Teng Biao, a legal academic, and fellow activist Hua Ze. China university removes reference to ‘free thinking’ in charter. Controversy has erupted after a leading Chinese university revised its charter to remove a reference to “free thinking” and adding a new stress on adhering to the leadership of the ruling Communist Party, Marxism and socialist theories of education. 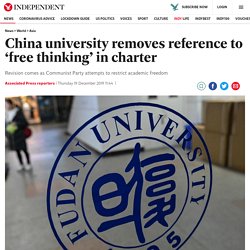 The changes at Fudan University in Shanghai were revealed earlier this week and reflect the atmosphere of increasing academic control and conservatism under the administration of party leader and head of state Xi Jinping. Online criticism of the move was quickly scrubbed by censors, but reports said some students and at least one professor had come out against the decision, actions that could have a serious impact on their future academic prospects and careers. Instagram’s murky ‘shadow bans’ just serve to censor marginalised communities. Vulnerable and marginalised communities on Instagram have been calling for a wider conversation to address what they say is the platform’s censoring of queer and plus-sized bodies. 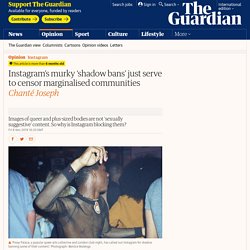 Instagram has a confusing policy of hiding certain content from its users – and in the past few weeks, Pxssy Palace (a popular queer arts collective and London club night) has called out the photo-sharing platform for “shadow banning” some of their content. Shadow banning refers to when images aren’t outright removed from the platform, but instead strategically hidden from users. This strategy prevents users from searching shadow-banned hashtags, and removes affected content from Instagram’s Explore page. Despite having over 28,000 followers, Pxssy Palace claims it has recently seen sharp dips in likes, comments and engagement as a result of shadow banning. When it comes to nudity online, Instagram purports to have a seemingly straightforward policy.

. • Chanté Joseph is a social media creative, host and writer. Trump's Warped Definition of Free Speech. Read: Donald Trump’s unprecedented assault on the media Although the actual legal effect of the order remains unclear, its intent is not. 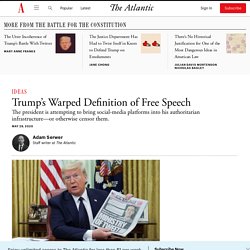 Democracy is impossible if private citizens cannot publicly oppose their leaders. The ultimate goal of Trump’s retaliation is to chill criticism of his actions and behavior, by sanctioning online platforms that engage in such criticism. Contrary to the president’s claim, Twitter was not “stifling free speech” by criticizing the head of state.