I love travelling, eating and sleeping.

Live a New and Healthy life without Drugs. An individual addicted to drugs or alcohol suffers severely from depression and guilt. 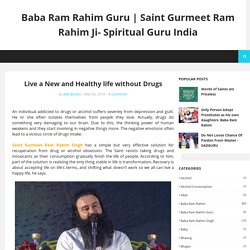 He or she often isolates themselves from people they love. Actually, drugs do something very damaging to our brain. Due to this, the thinking power of human weakens and they start involving in negative things more. The negative emotions often lead to a vicious circle of drugs intake. Body Donation By DSS Volunteers. With World Energy conservation Day, just around the corner, it is our prime responsibility, to find out ways to conserve energy and have a regular follow up, for the same. 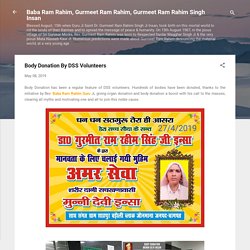 With our focus changing every day, it is really difficult to be consistent on our path. So days like energy conservation and similar other days, do a good job of putting people on the path. Most individuals realize their responsibility and are doing a commendable job. But at the same time, recklessness still reigns supreme. 90% of individuals are indifferent to these terms and it is really important, the majority of us, pitch in and work towards safeguarding our future.

Some of the efforts we can follow for this, Apart from reducing the consumption by taking conscious efforts, we need to make sure the green cover is adequate enough to counteract the many different, ventures taken up by humans in various forms. Dera Sacha Sauda Foundation Day – Baba Ram Rahim. A massive Naamcharcha took place at DSS Sirsa today to commemorate the immensely blissful Foundation Day of Dera Sacha Sauda. 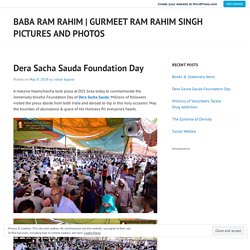 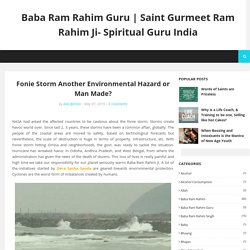 Storms create havoc world over. Since last 2, 3 years, these storms have been a common affair, globally. The people of the coastal areas are moved to safety, based on technological forecasts but nevertheless, the scale of destruction is huge in terms of property, infrastructure, etc. With Fonie storm hitting Orissa and neighborhoods, the govt. was ready to tackle the situation. Hurricane has wreaked havoc in Odisha, Andhra Pradesh, and West Bengal, from where the administration has given the news of the death of dozens. The speed of the fonie storm was much more than the other storms.

Parmarth Possible Only Due To Grace of Satguru. The job of saints is to guide the people in the right direction. 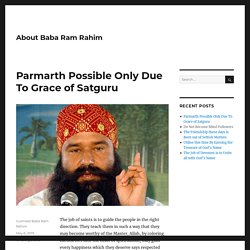 True Detachment must for the Vision of the Master. The love of Satguru is so effective that it grants everything to those who lose everything for it. 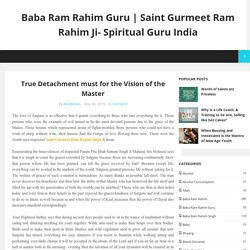 Those persons who were the example of evil turned to be the most devoted persons due to the grace of the Master. Those houses which represented arena of fights-troubles, those persons who could not have a wink of sleep without wine, their houses find the Ganga of love flowing there now. These were the words says respected Saint Gurmeet Ram Rahim Singh Ji Insan Enumerating the benevolences of respected Param Pita Shah Satnam Singh Ji Maharaj His Holiness says that it is tough to count the graces extended by Satguru because those are increasing continuously. How that person whose life has been granted, can tell the grace received by him? Humanitarian Works by humanitarian organization, Dera Sacha Sauda. Dedicated To Humanity Dera Sacha Sauda is an organization which prides itself in spiritual and social welfare of the masses. 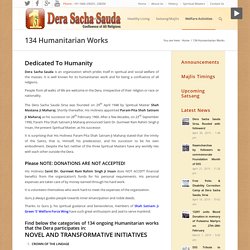 It is well known for its humanitarian work and for being a confluence of all religions. AIDS Awareness. India used to be a beacon to teach the world of moral character and cultural education but now, things are a nadir in India. 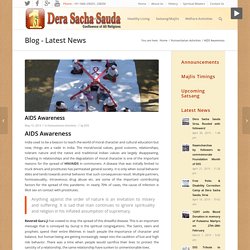 The moral/social values, good customs, relationships, tolerant nature and the native and traditional Indian values are largely disappearing. Cheating in relationships and the degradation of moral character is one of the important reasons for the spread of HIV/AIDS in commoners. A disease that was initially limited to truck drivers and prostitutes has permeated general society. It is only when social behavior ebbs and tends towards animal behavior that such consequences result.

It is stupendous to talk about God in this era of Satan. Revered Saint Gurmeet Ram Rahim Singh Ji Insan (addressed as “Pita Ji” by more than 50 million faithful followers presently) imparted the method of meditation to the seekers during the Satsang conducted at Unitech Ground, Local commercial belt, sector 97, Noida and liberated them from the cycle of transmigration of births and deaths. 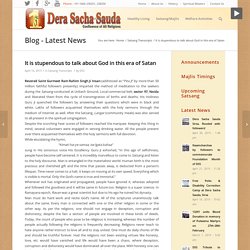 His Holiness Guru Ji quenched the followers by answering their questions which were in black and white. Lakhs of followers acquainted themselves with the holy sermons through the medium of Internet as well. After the Satsang, Langar (community meals) was also served to all present in the spiritual congregation. Population control Campaign by Dera Sacha Sauda. Population Control Day by day, the population explosion is becoming worse. 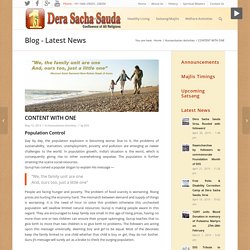 Due to it, the problems of sustainability, starvation, unemployment, poverty and pollution are emerging as newer challenges to the world. In population growth, India’s situation is the worst, which is consequently giving rise to other overwhelming sequelae. The population is further straining the scarce social resources. Guruji has coined a popular slogan to explain His message — “We, the family unit are one And, ours too, just a little one” God Can Increase The Life-Span Of The Followers With Firm Faith. Revered Saint Gurmeet Ram Rahim Singh Ji Insan (addressed as “Pita Ji” by over 50 million faithful followers presently) expounds that God has bestowed this priceless human birth to a soul.

While being in this body, soul needs to meditate and obtain liberation from the cycle of transmigration of births and deaths and reach the eternal abode. That is why the Supreme Power created this very specie namely humans. But man, on being deluded by mann (negative aspect of mind), keeps on committing bad deeds and never recites the Gurumantra which ends up all sorrows, worries and tensions; the incurable diseases which can be exclusively healed with God’s name only. If a man, who is on the verge of death, has firm faith and meditates regularly, then it might be possible that God increases his life span because this is not a big deal for Him. So it is essential that a person should meditate till the last breath and depart from this earth, to the eternal abode in God’s lap.

Reciting God’s Words Is The Ultimate Gift. Revered Saint Gurmeet Ram Rahim Singh Ji Insan (addressed as “Pita Ji” by over 50 million faithful followers presently) expounds that God is present in every particle. There is not a single place where ‘HE’ is not present, as HE is omnipresent and the way to reach HIM is meditation: listening Satsang is the way to Know HIM and by following the holy discourse, one can see the GOD and obtain the Divine Vision. Until a person knows what is his destination how can he choose the way to reach there; only by knowing about the destination one can decide the exact path to follow. On coming to Satsang, one comes to know about one’s objective, exact motive of one’s life and why he has got this human birth?

Empowerment through education In a day and time when the Right to Education in being deliberated, Dera Sacha Sauda is already providing a model of free education for the poor. A primary free school for the children of poor workmen has been established in Dera Sacha Sauda. Over 150 children are availing the benefits of this school. All books and stationery are provided free of cost and even the school bus is free. The families having low per capita income, which cannot support the education of their children, are thus helped. Food Bank and Cloth Bank. Food Bank and Cloth Bank Contributing sincerely to this initiative by supporting poor families with food and clothing assistance not only in India, but all over the world Members, numbering over hundreds of thousands, who were present in the special congregation organized on the first anniversary of ‘Jaam-e-Insan’ taking inspiration from Guruji pledged to make a food bank and a cloth bank.

Dera Sacha Sauda, Auckland, Volunteers lend helping hand in a Tree Plantation Campaign. 13th July, 2015. Hind Ka Napak Ko Jawab - MSG Lion Heart 2. Hind Ka Napak Ko Jawab - MSG Lion Heart 2. Watch: Gurmeet Ram Rahim Singh is back with 'MSG 2'! A Guide Must For Every Person To Live Life To The Fullest. Saint Gurmeet Ram Rahim Singh Ji Insan says that if the human being does not get the true and perfect Murshid-e- Kamil then he is unable to gain access to those stages in spiritualism and goodness which are his dues.

But if he goes under the shelter of a true and perfect saint- mendicant and act upon his sermons then Om, Hari, Allah Wahe guru can begin to show him his kind vision in each and every speck and grain of the world. Just as in school, colleges if no teachers or lecturers are there then the student cannot enhance in studies. If parents do not guide a child then it cannot learn to walk. Therefore the necessity of a guide is must at every place. Revered Guru Ji said further that during beginning parents, brothers-sisters are child’s guide. But the schools of today teach for earning money only and education has also turned into business these days. Blood Donation Drive organized by Dera Sacha Sauda Volunteers, Abu Dhabi, UAE.

In fact, for the prevention of corruption, theft, dishonesty, bribery, robbery etc, Guruji has become the beacon and torchbearer of honesty and hard work. Hard labor and honest living is the economic basis of the Ashram. Dera Sacha Sauda Stall at NGO Asia Expo, Mumbai. The NGO Asia Expo is a unique platform where representatives of NGOs meet, examine issues of global concern, share ideas, practice and build partnerships.

Keep Deprived Of True Happiness – Saint Gurmeet Baba Ram Rahim Singh. Show Your True Self To The World, Keeping Aside All Hesitations. Contentment Is The Mine Of All Comforts. Souls reach the Eternal Abode with resort to Gurumantra. All Cuisines are Futile as Compared to the Divine Nectar.