Online sales and in-store iPads give Burberry a Christmas boost. Online sales assistants and iPads in stores helped Burberry enjoy a healthy Christmas as it persuaded more visitors to buy despite a weakening number of shoppers on the high street. 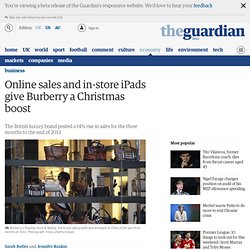 The luxury British brand revealed a 14% rise in sales to £528m for the three months to the end of 2013 compared with the same period a year before as it increased its number of customer service staff, working on and offline, by 30%. Sales in stores open more than a year rose 12% as the company said all store staff now have access to iPads to help shoppers order goods not currently in stock for delivery to their homes, while online shoppers can get help via a live "chat" service. Finance director Carol Fairweather said the number of shoppers visiting Burberry's stores had been "weak" but the company doubled the number of orders it had dispatched on a year before as it added three new local language websites including ones in Taiwanese Chinese script, Russian and Brazilian Portuguese.

China gives Burberry a boost in Q1 - Jul. 10, 2013. Burberry's stores experienced double-digit sales growth in China and the Americas in the first quarter of 2013. 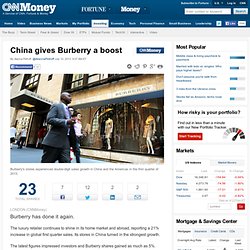 LONDON (CNNMoney) The luxury retailer continues to shine in its home market and abroad, reporting a 21% increase in global first quarter sales. Burberry - Iconic British Luxury Brand Est. 1856. Burberry attempts 'mass customisation' with Burberry Bespoke. Burberry has made its first attempt at ‘mass customisation’ by launching Burberry Bespoke, a programme that allows people to design and purchase their own, personalised version of the company’s iconic trench coat. 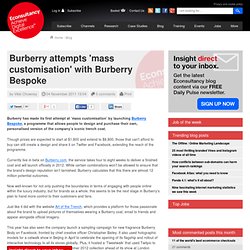 Though prices are expected to start at $1,800 and extend to $8,800, those that can't afford to buy can still create a design and share it on Twitter and Facebook, extending the reach of the programme. Currently live in beta on Burberry.com, the service takes four to eight weeks to deliver a finished coat and will launch officially in 2012. While certain combinations won’t be allowed to ensure that the brand’s design reputation isn’t tarnished, Burberry calculates that this there are almost 12 million potential outcomes. Now well-known for not only pushing the boundaries in terms of engaging with people online within the luxury industry, but for brands as a whole, this seems to be the next stage in Burberry’s plan to hand more control to their customers and fans.

Burberry merges digital and physical worlds - The One Centre. Burberry has launched a flagship store in London’s Regent Street, which merges the physical and digital worlds of Burberry in an engaging brand experience. 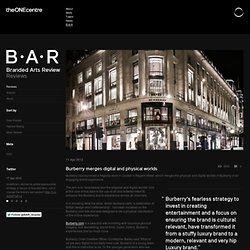 Burberry’s fearless strategy to invest in creating entertainment and a focus on ensuring the brand is cultural relevant, have transformed it from a stuffy luxury brand to a modern, relevant and very hip Luxury brand. The aim is to “seamlessly blur the physical and digital worlds” and at the core of this idea is the use of art and entertainment to enhance the Burberry brand experience across all channels.

Burberry World Live Flagship, Regent Street - designer shops. I step into the cathedral of a Burberry store on Regent Street wearing dirty jeans, my oldest shoes and the appearance (not wholly inaccurate) of one who has fallen on hard times. 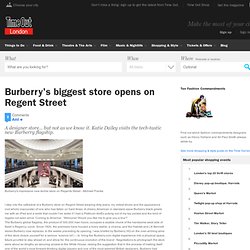 A cheery American in standard-issue Burberry black greets me with an iPad and a smile that couldn’t be wider if I had a Platinum AmEx poking out of my top pocket and the kind of regalia not seen since ‘Coming to America’. ‘Welcome! Would you like me to give you a tour?’ The Burberry global flagship, the product of 300,000 man hours, occupies a sizable chunk of the handsome west side of Nash’s Regency curve. Since 1820, the premises have housed a livery stable, a cinema, and the Habitat and LK Bennett stores Burberry now replaces.

Walking through the four floors and 27,000 square feet of slick Burberry selling space, I never once feel under pressure to buy, or even browse. Heritage meets digital in new flagship Burberry store. Burberry has opened a new flagship store on London's Regent Street that mixes elegant craftmanship with digital high-tech wizardry to create a truly seductive retail experience... 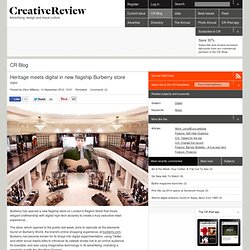 The store, which opened to the public last week, aims to replicate all the elements found on Burberry World, the brand's online shopping experience, at burberry.com. Burberry has become known for its forays into digital experimentation, using Twitter and other social media sites to introduce its catwalk shows live to an online audience, for example, and also using imaginative technology in its advertising, including a recent tie-in with the Weather Channel.

The store continues this inventive use of technology in the physical space, with 500 speakers and 100 screens fitted throughout, which will show original content created in-house at Burberry, and will occasionally feature 'disruptive digital takeovers', when the screens and speakers synchronise across the store to show digital rain showers, for example. Burberry designs flagship London shop to resemble its website. Should you find yourself in the new Burberry store in central London and ready to buy this season's gilt duck-head umbrella (£495) or trenchcoat (starts at £395), you would probably look around for a till at which to pay. 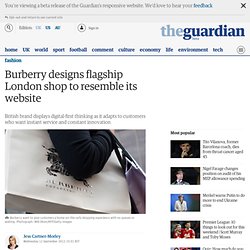 But you are more likely to be directed to a sofa by one of the sales staff, then presented with a swipe machine and with your purchase, already wrapped. In China, Burberry Stores Get Digital Makeover. Burberry Regent Street Flagship Opens. 13 September 2012 Ella Alexander BURBERRY has opened its largest ever London store on Regent Street - a multi-media experience combining the label's physical and digital achievements. 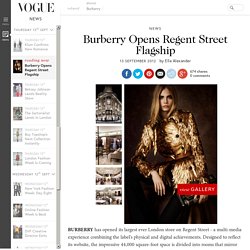 Designed to reflect its website, the impressive 44,000 square-foot space is divided into rooms that mirror sections from its online counterpart - such as Bespoke, Acoustic and Experiences. "Burberry Regent Street is one of the most architecturally and culturally significant projects we have undertaken," said Burberry chief creative officer Christopher Bailey. "In renovating this iconic London building we have worked with some of the UK's finest craftsmen to restore a wealth of historic features, at the same time as pushing the boundaries of digital technology. The result is a space defined by contrasts: at once imposing and intimate, its juxtaposition of craft and innovation is designed to delight, surprise and entertain.