Runes, Alphabet of Mystery. The Theban Alphabet. A few days ago, someone asked me what I knew about the Runes of Honorius, to which I replied honestly that I had never heard of them, but I would look into it and see what I could find. 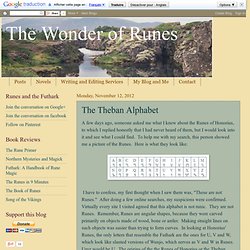 To help me with my search, this person showed me a picture of the Runes. Here is what they look like: I have to confess, my first thought when I saw them was, "These are not Runes. " After doing a few online searches, my suspicions were confirmed. Virtually every site I visited agreed that this alphabet is not runic. 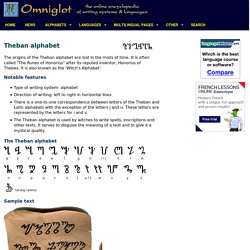 It is often called "The Runes of Honorius" after its reputed inventor, Honorius of Thebes. It is also known as the 'Witch's Alphabet'. Notable features. Www.runewebvitki.com. An Introduction to the Runes. Note from Apythia: There have been some changes to the original content here. 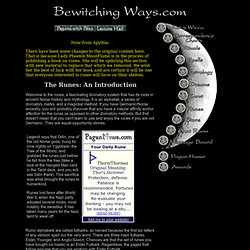 That is because Lady Phoenix MoonFlame is in the process of publishing a book on runes. She will be updating this section with new material to replace that which we removed. We wish her the best of luck with her book and are certain it will be one that everyone interested in runes will have on their shelves. Runes and magick. Runes in Magick Like most other divinatory methods, runes can be used in your magickal work, but also as with most other divinatory methods, it takes a lot of practice. 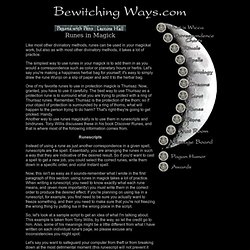 The simplest way to use runes in your magick is to add them in as you would a correspondence such as color or planetary hours or herbs. Let's say you're making a happiness herbal bag for yourself; it's easy to simply draw the rune Wunjo on a slip of paper and add it to the herbal bag. One of my favorite runes to use in protection magick is Thurisaz. Now, granted, you have to use it carefully. Runescripts Instead of using a rune as just another correspondence in a given spell, runescripts are the spell. Now, this isn't as easy as it sounds-remember what I wrote in the first paragraph of this section: using runes in magick takes a lot of practice.

So, let's look at a sample script to get an idea of what I'm talking about. Oswald the Runemaker - Home Page. The Runic Journey. Runes are an alphabetic script used by the peoples of Northern Europe from the first century c.e. until well into the Middle Ages. 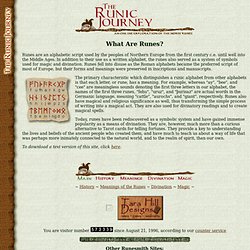 In addition to their use as a written alphabet, the runes also served as a system of symbols used for magic and divination. Runic magic. In medieval sources, notably the Poetic Edda, the Sigrdrífumál mentions "victory runes" to be carved on a sword, "some on the grasp and some on the inlay, and name Tyr twice. 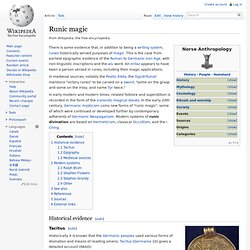 " In early modern and modern times, related folklore and superstition is recorded in the form of the Icelandic magical staves. In the early 20th century, Germanic mysticism coins new forms of "runic magic", some of which were continued or developed further by contemporary adherents of Germanic Neopaganism. Modern systems of runic divination are based on Hermeticism, classical Occultism, and the I Ching. Historical evidence[edit] Tacitus[edit] They attach the highest importance to the taking of auspices and casting lots. It is often debated whether "signs" refers specifically to runes or to other marks; both interpretations are plausible and Tacitus does not give enough detail for a definite decision to be made.[2] Epigraphy[edit] Gemstone rune sets. Gemstone Runes Stones: Amethyst Gemstone Meaning: Spirituality, connect with the source Notes: Instructions included, not actual picture. 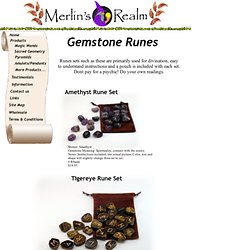 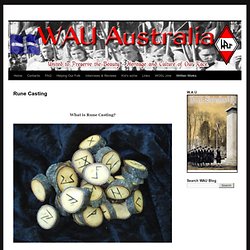 “Rune Casting”, is often seen by many people as something very similar to “fortune telling”. This is quite far from the truth however. Rune Casting works more deeply with the subconscious and is more like a guidance of the present not the future. As one asks a question, their entire conscious and unconscious mind is focused towards that one question and are drawn to a particular rune. When performing a runic reading, you often only address one particular issue, which you than examine the past, the present and the “future”, or rather “what will be if one follows the path one appears to be on”.

Runes are on no level magical or demonic, they are a method for examining the path you are on and what the effects might be all through using your subconscious. How to Perform Rune Casting? There is not one particular method on how to perform rune casting, however most people find that finding a quiet place where you know you will not be disturbed the easiest way. Instructions. Uthark theory. Runes and their meanings. The 13 Witches Runes ~ Part I. One of my all-time favourite oracles is the Witches Runes. 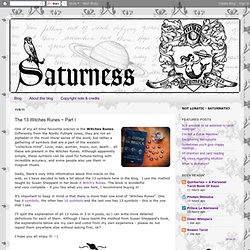 Differently from the Nordic Futhark runes, they are not an alphabet in the most literal sense of the word, but rather a gathering of symbols that are a part of the western "collective mind". Love, man, woman, moon, sun, death... all these are present in the Witches Runes. Although apparently simple, these symbols can be used for fortune-telling with incredible accuracy, and some people also use them in magical rituals. Sadly, there's very little information about this oracle on the web, so I have decided to talk a bit about the 13 symbols here in the blog. I use the method taught by Susan Sheppard in her book A Witch's Runes. It's important to keep in mind is that there is more than one kind of "Witches Runes". I'll split the explanation of all 13 runes in 3 or 4 posts, so I can write more detailed definitions for each of them.

I hope you all enjoy it! Sun The Sun is well-known symbol of good omen and protection. Moon Flight. Wicca & Witchcraft - Witch's Runes. Most Witches are aware that runes can be used for divination. 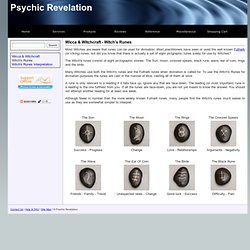 Most practitioners have seen or used the well known Futhark (or Viking) runes, but did you know that there is actually a set of eight pictgraphic runes solely for use by Witches? Making Runes - Andy's Bucket-o-Memes. Systems. Every magical tradition has them. The Qabalists have the Tree of Life, Voudou hungans have the hierarchy of loa, Western occultists have the Tarot. And the Northern Europeans have runes.

Each system is an attempt to explain and parameterise the universe; it's both a key to the mysteries and, in some way, the mysteries themselves. I've long held that the systems are all as good as one another; some work better for one person than another, but none is intrinsically better or more accurate than any other. Runes. The origins of Runes The middle-eastern biblical description of the phonic alphabet's (Phoenecian root) division into the many spoken language-branches of the Semitic middle-eastern language family-tree describes it as having originally occured shortly after the world-flood that destroyed Atlantis (called, in Genesis, the city of Enoch), at the beginning of the Babylonian Empire from the unification of northern Akkad and southern Sumer between the Tigris and Euphrates rivers.

In Genesis we are told of the building of the Tower of Babel, and of the subsequent "confusion of the tongues. " This mythology establishes the division of the alphabet into languages to the east of Babylon, with the 50 letters of Indus Sanskrit, and to the west with the 27 "monoliteral" Hieroglyphics of Egypt as having derived from the 36 letters of pre-Babylonian "Ugaritic" cuneiform, the earliest known ante-deluvial alphabets known of including "linear-A" and "-B.