Mysteries of spider silk strength unraveled. Scientists at ASU are celebrating their recent success on the path to understanding what makes the fiber that spiders spin -- weight for weight -- at least five times as strong as piano wire. 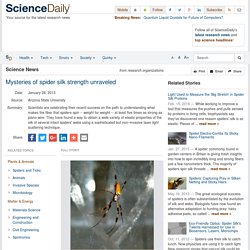 They have found a way to obtain a wide variety of elastic properties of the silk of several intact spiders' webs using a sophisticated but non-invasive laser light scattering technique. "Spider silk has a unique combination of mechanical strength and elasticity that make it one of the toughest materials we know," said Professor Jeffery Yarger of ASU's Department of Chemistry and Biochemistry, and lead researcher of the study. "This work represents the most complete understanding we have of the underlying mechanical properties of spider silks. " Spider silk is an exceptional biological polymer, related to collagen (the stuff of skin and bones) but much more complex in its structure. 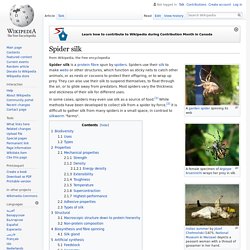 Spiders use their silk to make webs or other structures, which function as sticky nets to catch other animals, or as nests or cocoons to protect their offspring, or to wrap up prey. They can also use their silk to suspend themselves, to float through the air, or to glide away from predators. Most spiders vary the thickness and stickiness of their silk for different uses. Mysteries of spider silk strength unraveled.

Ko spider silk. Scientists mix in metal to make super-strength spider silk. In a number of cases, our finest manufacturing techniques haven't touched the materials that a few billion years of evolution have produced. 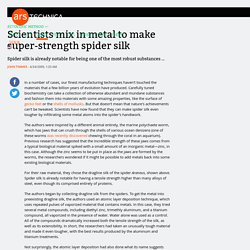 Carefully tuned biochemistry can take a collection of otherwise abundant and mundane substances and fashion them into materials with some amazing properties, like the surface of gecko feet or the shells of mollusks. But that doesn't mean that nature's achievements can't be tweaked. NSF - National Science Foundation. Alfalfa Plants - Spider Goats. The third method of obtaining spider silk is more complicated than the previous two; it involves genetically altering alfalfa plants so that they can produce the special spider silk proteins. 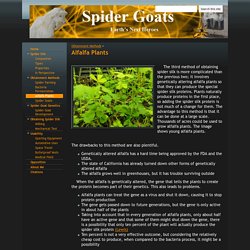 Plants naturally produce proteins in the first place, so adding the spider silk protein is not much of a change for them. The advantage to this method is that it can be done at a large scale. Thousands of acres could be used to grow alfalfa plants. The goats with spider genes and silk in their milk. Mixing Spider DNA and Goat Embryos Produces Milk With a ...

For their adorable antics and the milk they provide for delicious cheese, goats have long been among the most beloved farm residents, as well as the most common livestock on the planet. 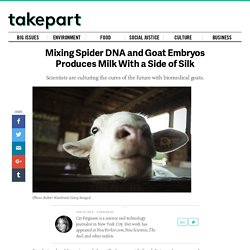 Now, thanks to genetic engineering, some goats’ milk is being used to make more than just chèvre. When most people think of agricultural GMOs, long rows of monocropped soy liberally doused with the herbicide Roundup come to mind. Spinning Tough Spider Silk From Goat Milk. It may be impossible to craft a silk purse from a sow's ear. 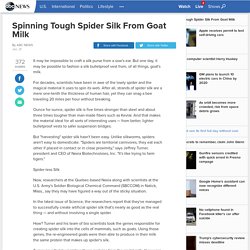 But one day, it may be possible to fashion a silk bulletproof vest from, of all things, goat's milk. For decades, scientists have been in awe of the lowly spider and the magical material it uses to spin its web. Sci-Fi & Supernatural Videos. The Goats with Spider Genes and Silk in their Milk - Horizon: Playing God - BBC Two.

Untitled. Untitled. Untitled. The Silky, Milky, Totally Strange Saga of the Spider Goat. By Jesse Hirsch on September 16, 2013 Illustration by Benjamin Karis-Nix In the rapidly evolving field of trangenics, things have been getting weird for years. 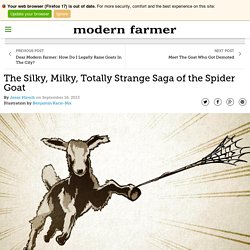 Cabbage has been grown with scorpion venom. Mice have been bred to chirp like birds. Glow-in-the-dark kitties are real. Untitled. Untitled. The goats with spider genes and silk in their milk. Scientists breed goats that produce spider silk. (PhysOrg.com) -- Researchers from the University of Wyoming have developed a way to incorporate spiders' silk-spinning genes into goats, allowing the researchers to harvest the silk protein from the goats’ milk for a variety of applications. 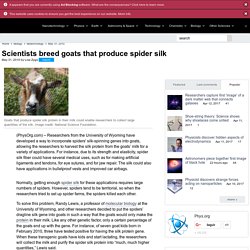 For instance, due to its strength and elasticity, spider silk fiber could have several medical uses, such as for making artificial ligaments and tendons, for eye sutures, and for jaw repair. The silk could also have applications in bulletproof vests and improved car airbags.