Ukemi the technique of falling part 1. Aikido Backward Roll Instruction. Aikido Techniques & Exercises : Funakogi Undo. Toryanse ~Traditional Japanese children's song. Aikikai Foundation. Aikido Grading Examination System The date and the results of an exam will be announced each time when it is held. 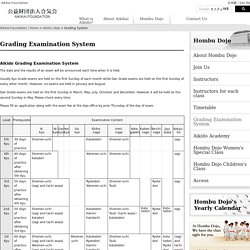 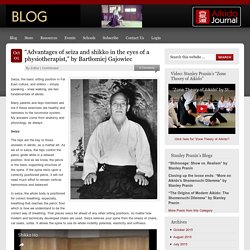 Many parents and dojo members ask me if these exercises are healthy and harmless to the locomotor system. My answers come from anatomy and physiology, as always. Seiza The hips are the key to those answers in aikido, as a martial art. As we sit in seiza, the hips control the pelvic girdle while in a relaxed position. In seiza, the whole body is positioned for correct breathing, especially, breathing that reaches the pelvic floor which is how we understand to be the correct way of breathing. Shikko – knee walking From my point of view I see only advantages to this exercise. Aikido Techniques - Tachiwaza Mae: Frontal Attacks. Tachi waza mae Standing, frontal attacks Tachiwaza mae: all attacks and aikido techniques. 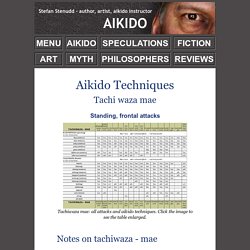 Click the image to see the table enlarged. Notes on tachiwaza - mae Morotedori (also called katate ryotedori) is sometimes dealt with as aihanmi katatedori, and sometimes as gyakuhanmi katatedori, depending on which one of uke's arms tori does the technique on. 20 Types of Bodyweight Squat. Fallout Push Up - HASfit Push Up Exercise Demonstration - Fall Out Pushup - Plyometric Push Ups. Aikido Falling Tips : Aikido Forward Roll From Standing. THE WRIST LOCK THAT WILL BREAK YOUR SHIT! Combative Concepts Nikyo. JUNKYARD AIKIDO: A Practical Guide To Joint Locks, Breaks, And Manipulations. How to Do Kotegaeshi. Irimi - Wikipedia. In Japanese martial arts, Irimi (入り身?) 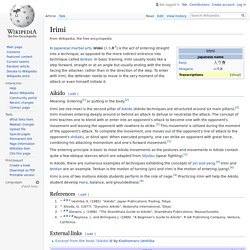 Is the act of entering straight into a technique, as opposed to the more indirect entrance into technique called tenkan. In basic training, irimi usually looks like a step forward, straight or at an angle but usually ending with the body facing the attacker, rather than in the direction of the step. To enter with irimi, the defender needs to move in the very moment of the attack or even himself initiate it. Aikido[edit] Meaning: Entering[1] or putting in the body.[2] Irimi (ee-ree-mee) is the second pillar of Aikido (Aikido techniques are structured around six main pillars).[3] Irimi involves entering deeply around or behind an attack to defuse or neutralize the attack.

The entering principle is basic to most Aikido movements as the postures and movements in Aikido contain quite a few oblique stances which are adapted from Sōjutsu (spear fighting).[1] References[edit] ^ Jump up to: a b c Ueshiba, K. (1985). External links[edit] Aikido Techniques - All the Defense and Attack Moves. All the basic moves of aikido. 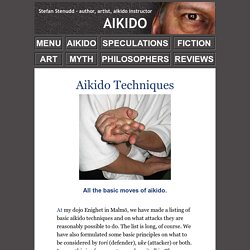 At my dojo Enighet in Malmö, we have made a listing of basic aikido techniques and on what attacks they are reasonably possible to do. The list is long, of course. We have also formulated some basic principles on what to be considered by tori (defender), uke (attacker) or both. In case this is of any use to you, here it all is. There may be additions in the future. Stefan Stenudd. “Advantages of seiza and shikko in the eyes of a physiotherapist,” by Bartłomiej Gajowiec. How To Sit and Bow In Seiza - Busonjuku USA.

The Writing System. Posted by Tae Kim The Scripts Japanese consists of two scripts (referred to as kana) called Hiragana and Katakana, which are two versions of the same set of sounds in the language. 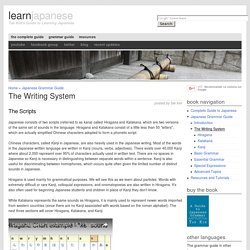 Hiragana and Katakana consist of a little less than 50 "letters", which are actually simplified Chinese characters adopted to form a phonetic script. Chinese characters, called Kanji in Japanese, are also heavily used in the Japanese writing. Most of the words in the Japanese written language are written in Kanji (nouns, verbs, adjectives). Hiragana is used mainly for grammatical purposes. While Katakana represents the same sounds as Hiragana, it is mainly used to represent newer words imported from western countries (since there are no Kanji associated with words based on the roman alphabet). Intonation. AikiWeb Aikido Information: Language: Meaning of Onegai Shimasu. "Onegai shimasu" is a hard phrase to directly translate to English. 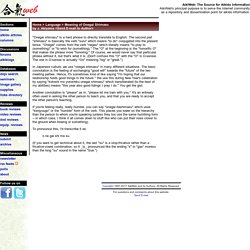 The second part "shimasu" is basically the verb "suru" which means "to do" conjugated into the present tense. Ukemi the technique of falling part 1. Aikido & Tobi Ukemi practice. The Aikido FAQ: Aikido dictionary - Attacks. Aikido Glossary - Dictionary of aikido terms. Dictionary of Aikido Terms Aikido terminology is in Japanese. 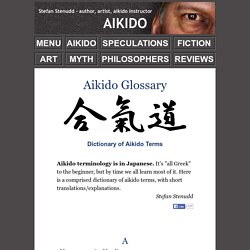 It's "all Greek" to the beginner, but by time we all learn most of it. Here is a comprised dictionary of aikido terms, with short translations/explanations. Stefan Stenudd ai harmony, unity, blending aihanmi basic relation between partners: both have same foot forward (left or right), compare gyakuhanmi aihanmi katatedori wrist grip, right on right or left on left, also called kosadori, compare gyakuhanmi katatedori aiki blending/uniting one's ki with that of the partner aikibatto sword exercises, solo or pair.