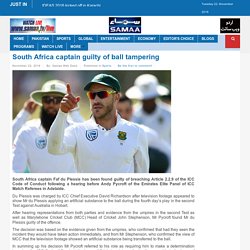 Du Plessis was charged by ICC Chief Executive David Richardson after television footage appeared to show Mr du Plessis applying an artificial substance to the ball during the fourth day’s play in the second Test against Australia in Hobart. After hearing representations from both parties and evidence from the umpires in the second Test as well as Marylebone Cricket Club (MCC) Head of Cricket John Stephenson, Mr Pycroft found Mr du Plessis guilty of the offence. The decision was based on the evidence given from the umpires, who confirmed that had they seen the incident they would have taken action immediately, and from Mr Stephenson, who confirmed the view of MCC that the television footage showed an artificial substance being transferred to the ball. 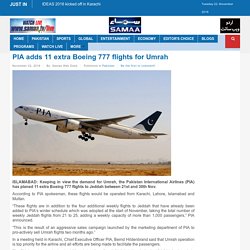 According to PIA spokesman, these flights would be operated from Karachi, Lahore, Islamabad and Multan. “These flights are in addition to the four additional weekly flights to Jeddah that have already been added to PIA’s winter schedule which was adopted at the start of November, taking the total number of weekly Jeddah flights from 21 to 25, adding a weekly capacity of more than 1,000 passengers,” PIA announced. “This is the result of an aggressive sales campaign launched by the marketing department of PIA to pro-actively sell Umrah flights two months ago.” Expats in US in fear as visa program could get reviewed. SAN FRANCISCO: The main U.S. visa program for technology workers could face renewed scrutiny under President-elect Donald Trump and his proposed Attorney General, Senator Jeff Sessions, a long-time critic of the skilled-worker program. 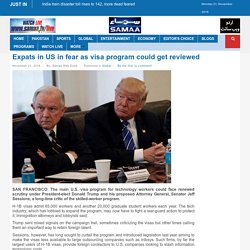 H-1B visas admit 65,000 workers and another 20,000 graduate student workers each year. The tech industry, which has lobbied to expand the program, may now have to fight a rear-guard action to protect it, immigration attorneys and lobbyists said. Trump sent mixed signals on the campaign trail, sometimes criticizing the visas but other times calling them an important way to retain foreign talent. Sessions, however, has long sought to curtail the program and introduced legislation last year aiming to make the visas less available to large outsourcing companies such as Infosys. Such firms, by far the largest users of H-1B visas, provide foreign contractors to U.S. companies looking to slash information technology costs. Tech industry groups also want changes. Janet Jackson posts about her health, says ‘Al Hamdu lillah’ Farooq Sattar warns against splitting MQM. Farooq Sattar in light mood with somber message. India train disaster toll rises to 142, more dead feared.

PUKHRAYAN: The death toll from India’s rail disaster rose to 142 on Monday after workers toiled through the night removing victims from the wreckage, with grim warnings that more bodies were trapped inside. 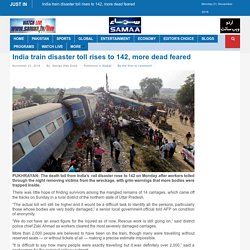 There was little hope of finding survivors among the mangled remains of 14 carriages, which came off the tracks on Sunday in a rural district of the northern state of Uttar Pradesh. “The actual toll will still be higher and it would be a difficult task to identify all the persons, particularly those whose bodies are very badly damaged,” a senior local government official told AFP on condition of anonymity. “We do not have an exact figure for the injured as of now. Rescue work is still going on,” said district police chief Zaki Ahmad as workers cleared the most severely damaged carriages. 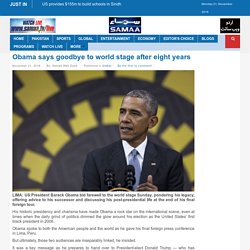 His historic presidency and charisma have made Obama a rock star on the international scene, even at times when the daily grind of politics dimmed the glow around his election as the United States’ first black president in 2008. Obama spoke to both the American people and the world as he gave his final foreign press conference in Lima, Peru.

But ultimately, those two audiences are inseparably linked, he insisted. India close in on victory as England slump. VISANKHAPATNAM: India were on the cusp of a 1-0 series lead after England’s batsmen buckled under pressure to lose five wickets on the final day of the second Test in Visakhapatnam on Monday. 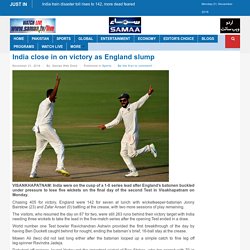 Chasing 405 for victory, England were 142 for seven at lunch with wicketkeeper-batsman Jonny Bairstow (23) and Zafar Ansari (0) battling at the crease, with two more sessions of play remaining. The visitors, who resumed the day on 87 for two, were still 263 runs behind their victory target with India needing three wickets to take the lead in the five-match series after the opening Test ended in a draw.

World number one Test bowler Ravichandran Ashwin provided the first breakthrough of the day by having Ben Duckett caught behind for nought, ending the batsman’s brief, 16-ball stay at the crease. Moeen Ali (two) did not last long either after the batsman looped up a simple catch to fine leg off leg-spinner Ravindra Jadeja. US provides $155m to build schools in Sindh. Video: Dacoits rob car in Lahore at gunpoint. Pak Tea House—a resort for intelligentsia. 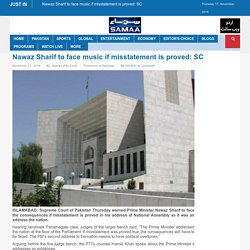 Hearing landmark Panamagate case, judges of the larger bench said, “The Prime Minister addressed the nation at the floor of the Parliament. If misstatement was proved true, the consequences will have to be faced. The PM’s second address to the nation seems to have political overtones.” Arguing before the five-judge bench, the PTI’s counsel Hamid Khan spoke about the Prime Minister’s addresses as evidences. President Erdogan pays rich tribute to Pakistan. ISLAMABAD: Turkish President Recep Tayyip Erdogan paid rich tribute to Pakistan saying Pakistan has always presented the best example for the Muslim Ummah. 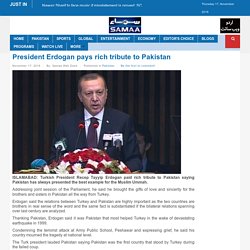 Addressing joint session of the Parliament, he said he brought the gifts of love and sincerity for the brothers and sisters in Pakistan all the way from Turkey. Erdogan said the relations between Turkey and Pakistan are highly important as the two countries are brothers in real sense of the word and the same fact is substantiated if the bilateral relations spanning over last century are analyzed. All parties should wait for court’s decision on Panama case: Saad. Pakistan calls the UN attention to India’s escalation along LOC. UNITED NATIONS: Pakistan has drawn the attention of the United Nations to India’s escalatory actions, which are fuelling tensions and threaten regional peace and security, says a press release received here today from New York. 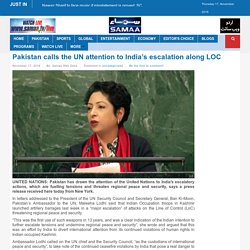 In letters addressed to the President of the UN Security Council and Secretary General, Ban Ki-Moon, Pakistan’s Ambassador to the UN, Maleeha Lodhi said that Indian Occupation troops in Kashmir launched artillery barrages last week in a “major escalation” of attacks on the Line of Control (LoC) threatening regional peace and security. “This was the first use of such weapons in 13 years, and was a clear indication of the Indian intention to further escalate tensions and undermine regional peace and security”, she wrote and argued that this was an effort by India to divert international attention from its continued violations of human rights in Indian occupied Kashmir. Clinton makes first public appearance after Trump win. 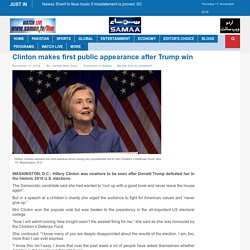 WASHINGTON, D.C.: Hillary Clinton was nowhere to be seen after Donald Trump defeated her in the historic 2016 U.S. elections. The Democratic candidate said she had wanted to “curl up with a good book and never leave the house again”. France sees a huge market in Pakistan. ISLAMABAD: Underlining Pakistan’s importance for France, Embassy of France’s Regional Economic Department for India and South Asia Head Jean Marc Fenet has said that his country considers Pakistan as a huge market for business and is keen to further promote bilateral trade and economic relations. He said France had previously focused on China due to which South Asia was ignored, but now it was looking at South Asia for business. Three-day holidays announced. New twist appears in Panamagate case. Share Video ISLAMABAD: In a surprise twist, a new revelation came to the fore in Panamagate case as a Qatari prince, who came to Nawaz Sharif’s rescue before the Supreme Court of Pakistan, turned out to be a business partner of Sharif family’s frontman, Saifur Rehman.

Three killed in Karachi in two hours. Nawaz Sharif to face music if misstatement is proved: SC. Monsoon rains kill 45 in KP in 10 days. PESHAWR: The heavy torrential rains and flash floods have killed 45 persons and injured 25 others in various incidents during last ten days in different parts of the province. According to latest report of Provincial Disasters Management Authority (PDMA) Khyber Pakhtunkhwa, most of the casualties occurred in Chitral where 29 people including 21 civilians and eight security personnel died and four others injured due to flash floods caused by heavy torrential rains on July 2.

The bodies of 19 victims have been recovered while efforts are underway for recovery of 10 others missing persons. The floods and heavy rains have destroyed 20 houses besides partially damaging 27 others. Edhi is dead, His mission will stay. By Muhammad Luqman The passing away of Abdul Sattar Edhi in Karachi has highlighted how philanthropy and social work can transform lives of people in developing countries like Pakistan. Amir ‘s career set to come full circle. LONDON: The floppy hair he had as a teenager may have been replaced by a shorter cut and the once clean-shaven face is now home to a goatee beard. But there was no mistaking the whippy left-arm action as Mohammad Amir ran into bowl against Somerset at Taunton last week or the “airplane” celebration that greeted his three first-innings wickets.

It was a sight many fans would have been forgiven for thinking they would ever see again on an English field after Amir’s career came to a dramatic and possibly terminal halt at Lord’s in 2010. Amir’s return to Lord’s will make me feel sick: Swann. LONDON: Former England offspinner Graeme Swann believes that Pakistani bowler Muhammad Amir is ‘a man who crushed the morality’ of cricket, whose return to Lord’s next week will make him sick. Pakistani-American actor to star in 7th season of Hawaii Five-O. NEW YORK: Faran Tahir (born on February 16, 1964) is a Pakistani-American film and television actor. Tahir is best known for his act as Raza, the leader of a terrorist organization, “The Ten Rings” in Iron Man (2008). Ronaldo injured in Euro 2016 final. The Decease Of Humble Humanitarian-Abdul Sattar Edhi.