The Pursuit of Happiness. *Update* Disclaimer: This article does not deal with clinical depression. 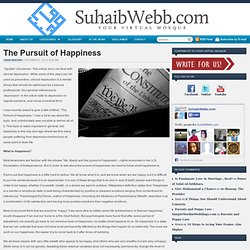 While some of the steps can be used as prevention, clinical depression is a mental illness that should be addressed by a trained professional. Any general references to ‘depression’ in the article refer to depression in regular parlance, and not as a medical term. I was recently asked to give a talk entitled, “The Pursuit of Happiness.” I had a lot to say about the topic, and unfortunately was not able to deliver all of it. This topic is really important in general, but especially in this day and age where we find many people suffering from depression/melancholy at some point in their life. What is Happiness? Most Americans are familiar with the phrase “life, liberty and the pursuit of happiness”—rights enshrined in the U.S. It turns out that happiness is a little hard to define. 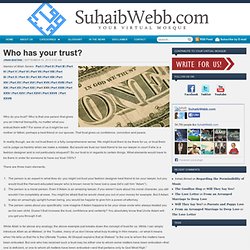 Who is that one person that gives you an internal tranquility, no matter what you entrust them with? For some of us it might be our mother or father, perhaps a best friend or our spouse. That trust gives us confidence, conviction and peace. In reality though, we do not trust them in a fully comprehensive sense. There are three main elements: While Allah is far above any analogy, the above example just breaks down the concept of trust for us. Trusting someone in that complete sense in all circumstances can be hard.

“And to Allah belongs whatever is in the heavens and whatever is on the earth. As well as: “We Weren’t Born Knowing, We Had to Learn” The Path to Learning & Teaching Qur’an By Amal S Bismillah (In the Name of God) It is reported that Umar Ibn Al-Khattab (radi Allahu ‘anhu) said: “Every day we are told so and so has just died. 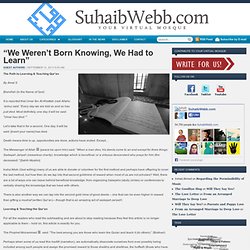 Most definitely, one day it will be said: “Umar has died.”” Let’s take that in for a second. Death means time is up, opportunities are done, actions have ended. The Messenger of Allah ﷺ (peace be upon him) said: “When a man dies, his deeds come to an end except for three things: Sadaqah Jariyah (ceaseless charity); knowledge which is beneficial; or a virtuous descendant who prays for him (the deceased).” Insha’Allah (God willing) many of us are able to donate or volunteer for the first method and perhaps have offspring to cover the last method, but how then do we tap into that second goldmine of reward when most of us are not scholars?

Honor the Prophet ﷺ. Turning Towards God in the Worst Moments of Our Lives. Many of us have experienced, are experiencing or will experience difficult moments that make us wonder whether there is any hope for our future. 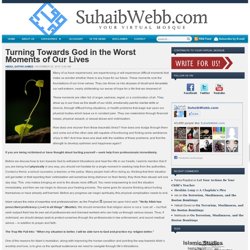 These moments rock the foundations of our inner selves. They can throw us into abysses of doubt and devastate our self-esteem, nearly obliterating our sense of hope for a life that we dreamed of. These moments are often full of anger, sadness, regret, or a combination of all. They show up in our lives as the death of our child, emotionally painful marital strife or divorce, through difficult living situations, or health problems that wage war upon our physical bodies which leave us in constant pain. They can materialize through financial losses, physical assault, or sexual abuse and victimization. How does one recover from these traumatic times? If you are being victimized or have thought about hurting yourself – seek help from professionals immediately.

So, we come to the main question. 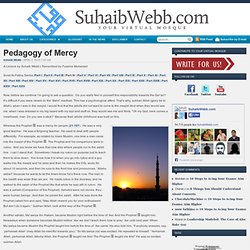 Do you really feel in yourself this responsibility towards the Qur’an? It’s difficult if you were raised on the ‘Bam!’ Madhab. Whereas the Prophet ﷺ was a mercy for people (21:107). Another sahabi, Mu’awiya ibn Hakam, became Muslim right before the time of `Asr. Do we feel this excitement when we learn something? So Mu’awiya learnt yarhamak Allah then the time of `Asr came and he joined the prayer, and somebody sneezed really loudly. Mu’awiya said, “The Prophet ﷺ called me. This should be our relationship with the Qur’an. So we start now with the Qur’an, and how to benefit with the Qur’an. Mother of the Scripture. A Lecture by Suhaib Webb | Transcribed by Fuseina Mohamad Surat Al-Fatiha Series: Part I | Part II | Part III | Part IV | Part V | Part VI | Part VII | Part VIII | Part IX | Part X | Part XI | Part XII | Part XIII | Part XIV | Part XV | Part XVI | Part XVII | Part XVIII | Part XIX | Part XX | Part XXI | Part XXII As we finish now, we’re going to talk about Surat al-Fatiha; that’s why most people came, to get the goods on the greatest Surah of the Qur’an.

First of all, someone might ask, “Why this Surah? Why are you going to spend six weeks on this Surah? Can’t you do the tafsir (exegesis, interpretation, and contextualization) of this Surah in one week?” First of all, this class is not tafsir . Most of us here, we’re laymen with the Qur’an. Now, somebody asks, “Why? I timed al-Fatiha. The Lost and Found Nation of Qur’an. The Qur’an’s role in developing the right mindset and attitude towards life cannot be underestimated. 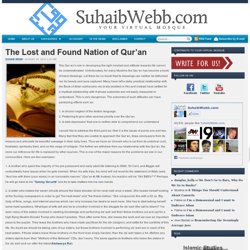 Unfortunately, for many Muslims the Qur’an has become a book of mere blessings. Let there be no doubt that its blessings can neither be fathomed nor its beauty and aura captured. Many have left a daily, practical relationship with the Book of Allah subhanahu wa ta’ala (exalted is He) and instead have settled for a mystical relationship with it whose outcomes are not easily measured or understood. This is very dangerous. The outcomes of such attitudes can have paralyzing effects such as: 1. I would like to address the third point as I feel it is the cause of points one and two. 1. 2. These are the outcomes – perhaps a bit over the top – of materialism and selfishness (look at the crazy cost of mahrs [dowries] these days). It’s Never too Late. I finally reached the elevator of my apartment building. 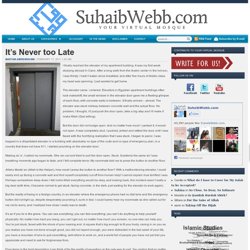 It was my first week studying abroad in Cairo. After a long walk from the Arabic center in the hot sun, I was thirsty. I hadn’t eaten since breakfast, and after five hours of Arabic class my head was spinning. I just wanted to get home. The elevator came. But the door did not budge open. Making du`a’ , I called my roommate. Allahu Musta`an (Allah is the Helper) , how could I press the button to another floor? Islam in Spain. Islam in Spain has had a fundamental presence in the culture and history of the nation. 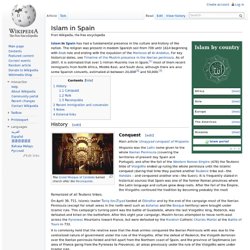 The religion was present in modern Spanish soil from 709 until 1614 beginning with Arab rule and ending with the expulsion of the Moriscos of Al-Andalus . For key historical dates, see Timeline of the Muslim presence in the Iberian peninsula . As of 2007 [update] , it is estimated that over 1 million Muslims live in Spain, [ 1 ] most of them recent immigrants from North Africa, Middle East, and South Asia; although there are also some Spanish converts, estimated at between 20,000 [ 2 ] and 50,000. [ 3 ] History [ edit ] Conquest [ edit ] On April 30, 711, Islamic leader Tariq ibn-Ziyad landed at Gibraltar and by the end of the campaign most of the Iberian Peninsula (except for small areas in the north-west such as Asturias and the Basque territory) were brought under Islamic rule.

Rule [ edit ] The Madrasah of Granada was the first university in Granada , Andalusia . The likely future picture of global Islam. By Ghayur Ayub Recently, Muammar Gaddafi stated that “There are signs that Allah will grant victory to Islam in Europe without sword, without gun, without conquest. 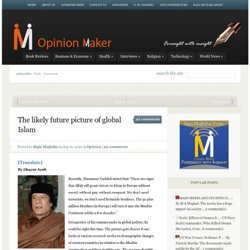 We don’t need terrorists, we don’t need homicide bombers. The 50 plus million Muslims (in Europe) will turn it into the Muslim Continent within a few decades.” Irrespective of his summersaults in global politics, he could be right this time. The picture gets clearer if one looks at various research works on demographic changes of western countries in relation to the Muslim immigration and their fertility rate. The figures of 2007 show that; in France, the Fertility Rate was 1.8; in England it was 1.6; in Greece 1.3; Germany 1.3; Italy 1.2; Spain 1.1; and in EU as a whole with 31 countries, it was 1.38. As a result of this change; in France 30% of children age 20 years and below are Muslims. In Canada the FR is 1.6 against the required rate of 2.11 causing a gradual decline in non Muslim population. The end.

The Deen (Religion) is Ease. The Concept of Fun in Islam. Once, Aisha (رضى الله عنها) was talking very boldly with the Prophet (صلى الله عليه و سلم) when Abu Bakr (رضى الله عنه) happened to enter upon them. 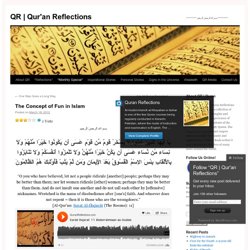 He grew so angry at his daughter’s behavior, that he wanted to beat her! - but the Prophet (صلى الله عليه و سلم) prevented him. After Abu Bakr (رضى الله عنه) had left, he (صلى الله عليه و سلم) remarked: “See, how I saved you.” [Gist of a hadith from Sunan Abu Dawood ] It is reported that the Prophet’s companions remarked, ”O Messenger of Allah, you joke with us?” The Sahaabah saw nothing wrong with joking or having fun, as they saw the Prophet (صلى الله عليه و سلم), their leader and teacher, occasionally doing so. The many delightful stories about their sense of humour reflects the easy-going nature of the first Islamic society, and how far removed it was from boringness and gloom.

This is moderate, Islamically-acceptable humour which does not go beyond the bounds of truth, and it serves its purpose of refreshing hearts and minds.