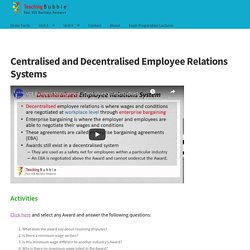 ClubsNSW tells members some venues can reopen with more than 500 patrons from Monday. Updated about an hour agoThu 28 May 2020, 10:58pm NSW clubs could welcome crowds of more than 500 people in certain venues from Monday, with the industry boasting it "heavily influenced" state government decision-making. 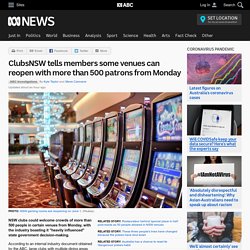 Key points: A ClubsNSW circular was sent to members on Wednesday announcing how venues would reopen next week under "very generous conditions"ClubsNSW CEO Josh Landis says in the memo the NSW Chief Health Officer was "heavily influenced" by the industry association's planThe document lays out how more than 500 people will be allowed in large venues with multiple dining areas and they can make use of gaming rooms with poker machines According to an internal industry document obtained by the ABC, large clubs with multiple dining areas will be able to accommodate hundreds of patrons if they meet certain conditions. In the ClubsNSW circular, Mr Landis boasted that the NSW Chief Health Officer and other government officials were "heavily influenced by ClubsNSW's reopening plan". Law of Supply and Demand Definition and Explanation.

What Is the Law of Supply and Demand? 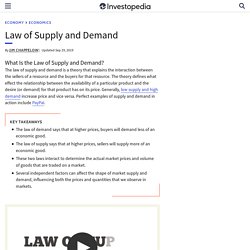 The law of supply and demand is a theory that explains the interaction between the sellers of a resource and the buyers for that resource. The theory defines what effect the relationship between the availability of a particular product and the desire (or demand) for that product has on its price. Generally, low supply and high demand increase price and vice versa. Perfect examples of supply and demand in action include PayPal. Key Takeaways The law of demand says that at higher prices, buyers will demand less of an economic good.The law of supply says that at higher prices, sellers will supply more of an economic good.These two laws interact to determine the actual market prices and volume of goods that are traded on a market.Several independent factors can affect the shape of market supply and demand, influencing both the prices and quantities that we observe in markets.

Volume 75% Press shift question mark to access a list of keyboard shortcuts. What is the economy? Why Study Economics? (3) Watch - Discover. 70 Years of China’s Economic Growth In One Chart. View a high-resolution version of this graphic here. 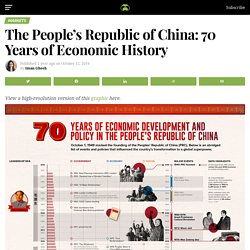 From agrarian economy to global superpower in half a century—China’s transformation has been an economic success story unlike any other. Today, China is the world’s second largest economy, making up 16% of $86 trillion global GDP in nominal terms. If you adjust numbers for purchasing power parity (PPP), the Chinese economy has already been the world’s largest since 2014. The upward trajectory over the last 70 years has been filled with watershed moments, strategic directives, and shocking tragedies — and all of this can be traced back to the founding of the People’s Republic of China (PRC) on October 1st, 1949. 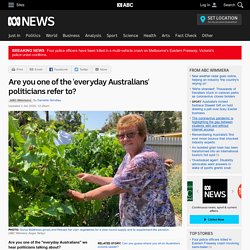 Key points: The median income in Australia is $48,360 before taxLow income earners are struggling to pay bills or meet healthcare needs with some returning to work in their 70sSliding into debt becomes very easy for those trying to work and afford child care or health insurance If you earn any more than $50,000 per year, you have already stepped out of the "average Aussie" bracket.

The median income in Australia is $48,360 before tax, according to a report released by the Australian Bureau of Statistics this month that analysed data from the 2016/2017 financial year. In regional areas, that figure is far lower. Economics isn't as highfalutin' as the jargon makes it sound. The first is one you should have heard of: opportunity cost. 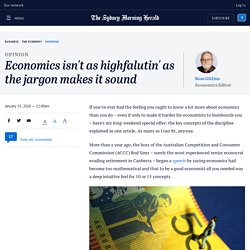 Many economists consider “opp cost” to be the single most important and fundamental concept in economics, and the discipline’s most useful contribution to the betterment of mankind. Older unemployed and underemployed workers struggling to find roles due to ageism in recruiting. The homelessness crisis affecting Australia's older women. A deep and systemic gender inequality contributes to a woman’s financial vulnerability in her later years. 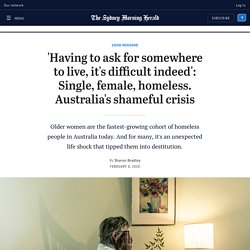 When a critical life event happens on top of that – a shock medical diagnosis, for example, a sudden job loss or a rent hike – her situation can become perilous overnight. MARIA* is 56, tall with tawny hair that she wears in a long ponytail over her shoulder. Despite the cheerfulness of her jungle-print top, her dark eyes look as weary as cracked onyx. We meet in inner-western Sydney’s Rozelle, in the office of the St Vincent de Paul Society. She emigrated from Europe to Australia as a seven-year-old, she tells me haltingly; her formative years were spent in Rockdale, in south Sydney. She married as a young woman in 1985, to a “gentleman from Uruguay”, but it didn’t work out.

What is Quantitative Easing? Australia's net debt likely to jump to more than $500 billion as massive coronavirus stimulus unleashed. Analysis. 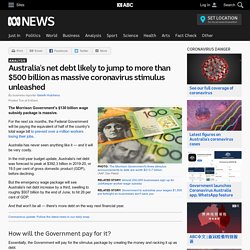 Coronavirus: Australia's massive economic rescue package, where will Canberra find the money to fund it? The Morrison government has unleashed stimulus worth more than $200 billion in a bid to save Australia from a very deep and prolonged coronavirus-induced recession. 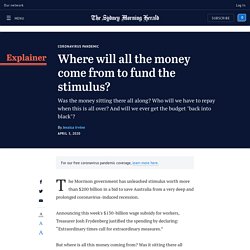 Announcing this week's $130-billion wage subsidy for workers, Treasurer Josh Frydenberg justified the spending by declaring: “Extraordinary times call for extraordinary measures.” But where is all this money coming from? Coronavirus data shows job advertisements in freefall. Posted about 5 hours agoWed 8 Apr 2020, 8:18pm If it wasn't already obvious, now is a very bad time to look for a new job. 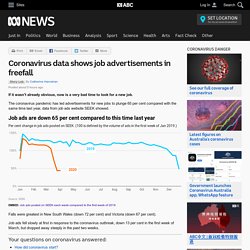 The coronavirus pandemic has led advertisements for new jobs to plunge 65 per cent compared with the same time last year, data from job ads website SEEK showed. Falls were greatest in New South Wales (down 72 per cent) and Victoria (down 67 per cent). Job ads fell slowly at first in response to the coronavirus outbreak, down 13 per cent in the first week of March, but dropped away steeply in the past two weeks. Sport, the arts and media are hit hardest.