Hawkwinds is a leading Custom software development company specialized in Fantasy Sports, Social network and AI. We build the world’s best fantasy sports software & Social network solutions. Get in touch with us today.

New Social Media Platform? A Survival Guide against Social Media Giants. Scope of Fantasy Sports Industry in the Year 2020-2021. Why Fantasy Sports App Platforms are Becoming Popular? Five Reasons to Pay Attention to Niche Social Networks. Fantasy Sports App: A Profitable Business to Look Forward to. The fantasy sports app business has seen tremendous growth in the past few years and has now become a behemoth. 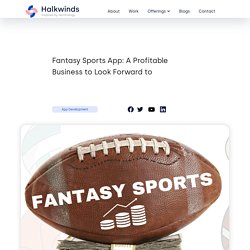 Generating over billions of dollars in revenue, the industry is a huge marketplace for the coming together of big brands, celebrities, gambling, league tournaments, billions of sports lovers, and much more! The industry has been experiencing massive partnerships with major players and increased audience and marketing expenditure, with many investors looking to get a piece of the action.

The shift of the digital audience from the web to smartphones has majorly fuelled the expansion of this industry. According to recent surveys, over 4.57 billion people in the world use the internet over mobiles, which is mainly because it’s easy to use, affordable, has cheap data rates with good connectivity, and is easily accessible at any time and anywhere. Why You Should Consider Creating a Niche Social Network. Everyone wants to feel special- whether you admit it or not, but deep inside everyone likes this feeling. 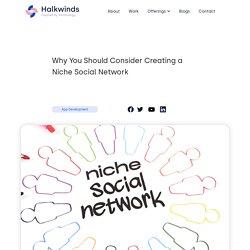 However, in this huge world, with billions of people residing, we at times even find it difficult to find one person who shares common interests. We feel lost and devastated. And, these social media platforms like Instagram and Facebook are of no help either. They are so vast that it is next to impossible to find people sharing similar interests. Here is where niche social networking sites come into the picture. A niche is a specialized subset of a larger set. It can be a professional network, dating network, corporate network, or a network where you share common hobbies. e.g. Let's dive into the reasons you should consider creating a niche networking site: Rise of closed communities: Building a niche social media app will help to assemble like-minded people all in one place. So, you have enough reasons to create your niche social network .

6 Things to Know Before Creating Your Own Social Network. As we all know, the social media industry is one of the most flourishing ones in the present netizen’s world and today’s digital era. 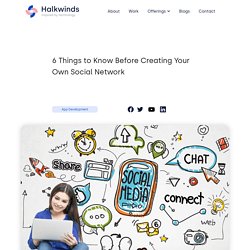 According to a survey conducted by Statista, over 3.6 billion people, out of 4.66 billion internet users across the globe use social media, which is close to 80% of the total! Social media has become one of the biggest tools in influencing public opinion, marketing, communication, building a business, meeting new people, establishing your brand, entertainment, educational purposes, and so on. The uses and opportunities that social media provides are endless. People use different networks for different objectives – LinkedIn for professional purposes, WhatsApp for texting with friends, family, and acquaintances, Instagram and Facebook for socializing, Tinder and Bumble for dating and meeting new people, etc. although the purposes are not always so definitively outlined. 1] Know your target audience 4] Develop a growth strategy based on your users. How to Start a Fantasy Sports Website: A Short Roadmap for Your Fantasy Football Project. Football- the heartbeat of football fans worldwide. 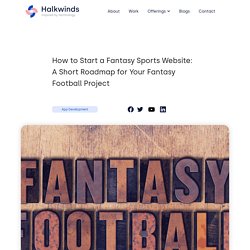 They are so passionate about this sport that in many countries, it is ingrained as their national culture. We know serving 3.5 billion passionate sports fans is a herculean task. And, the very first question which strikes your mind as an entrepreneur must be: How to start a fantasy sports website? Not anymore!! Become a Billionaire with Fantasy Sports App Development. Fantasy sports- the new buzz in the town!! 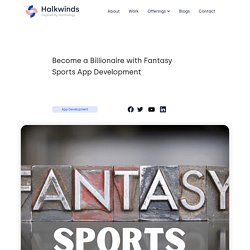 People are attracted to fantasy sports, as they get that adrenaline rush while trading and customizing the teams. They feel responsible for the player's performance. Not only this, they get the feeling of that elite sports manager who was in charge of selecting and maintaining the teams. And, the best part of fantasy sports app development is that it is not restricted to one game. There is an endless number of options. Cost and Features of Fantasy Sports Software Development - Halkwinds. When it comes to sports, the plethora of options- from basketball, tennis to soccer and football etc., are mesmerizing, making it a popular means of entertainment for people all across the globe. 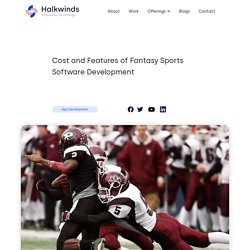 As per the latest reports, the market revenue of online sports is expected to be $2174.8 by the end of 2023. The figure clearly depicts the pace at which the demand for e-sports is increasing. There’s a growing craze amongst fans all across the globe for fantasy sports which involves players building a virtual team with real players who physically play the sport. For example, a fantasy sports cricket websitewould have users building their own virtual team, the players of which are actually playing the matches at some stadium.

Whether the user will lose or win depends on the players’ or team’s actual performance on the ground. Planning to Build a Sports Fantasy App? Here's All That You Need to Know- Halkwinds. Fantasy sports app is one of the finest sports type of virtual world. 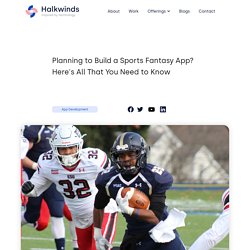 The market has achieved considerable growth in this field. If you are planning to build your own fantasy app here are some important points which you need to know. You are on the right track if you are contemplating to start a fantasy sports business. Proclaimed as one of the most lucrative industries of the 21st century, fantasy sports has seen substantial growth.

Though the major market for this business is the United States, India and China are also emerging in this field. The American Sporting culture has seen a radical change with the hyper growth of sports startups. According to a study by Market watch, America is the largest producer of Fantasy Sports having a market share in revenue from this category consisting of 58% in 2017, and Europe withhold the second-largest market share with around 14% share in 2017. It is estimated that the global market size for Fantasy Sports apps can reach USD 26400 million by 2024. Social Media App Development - Halkwinds. With the advent of the mobile-dominating era, a very popular revolution has taken place. 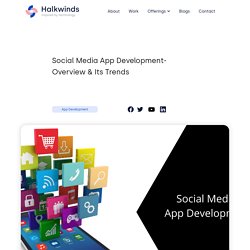 Important features to consider when developing a successful social media app - Halkwinds. Social media, at present, forms an important part of the internet. 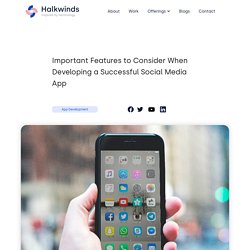 When you think of the last time you used a PC device, laptop or mobile, chances are high that you used one or the other popular social media apps such as Facebook, WhatsApp, Twitter, Snapchat, Instagram, YouTube, etc. Social media apps dominate the app world by providing the users with a comprehensive source of online content. Regular users and social media application development experts are quite aware of the addictive power these platforms possess. A small notification from any of your favourite social media apps is enough to draw your attention, irrespective of what you are doing. That being said, it’s no surprise that social media apps dominate smartphone users’ time. How to build your own contemporary Social Network? - Halkwinds.

A basic but Billion $$ question, what is a social network? 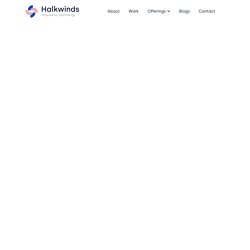 To put it simply, it means connecting to your friends, family, colleagues, customers, or clients through internet-based social media sites. It consists of people that share similar interests like yours. Building a social network online can also mean gaining an audience for a social purpose, a business purpose, or both. The most common networking sites include platforms like Twitter, Facebook, Instagram, LinkedIn, Pinterest, etc. Despite the never-ending competition, Facebook still holds the first position with over two billion users. How to build your own contemporary Social Network? - Halkwinds.

How to build a disruptive Social Media app? - Halkwinds. When it comes to exposure and sustainability, nothing beats social media in the application game. A quick glance at market research will tell you that the big players and their all rounder products have saturated the market. A wild-card with potential can always disrupt this industry. Snapchat is the best example for one of those disrupting applications that is constantly bothered by big players but it refuses to give in. It leverages AI, AR, and community driven design trends to provide unique experiences in the palm of our hands. There are two ways you can approach your social media app development project.

Getting Started in the world of Fantasy Sports App - Halkwinds. Let's start by understanding what this game is about. A fantasy sport (aka rotisserie or roto) is a game that allows fans to play a virtual game or virtual season of a real sport played by real people. A fantasy sport app user creates a virtual roster of real players via an app or a website. In this roster they pick the players from different teams (say Liverpool or Chelsea) to make a virtual team of their dreams. Now selection of these players depend on the user's research, analysis, or intuition of how individuals are going to perform in the season.