15 Exotic Animals You Can Legally Own. Move aside dogs, cats, and fish! 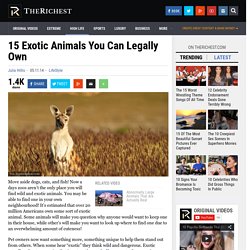 Now a days zoos aren’t the only place you will find wild and exotic animals. You may be able to find one in your own neighbourhood! It’s estimated that over 20 million Americans own some sort of exotic animal. Some animals will make you question why anyone would want to keep one in their house, while other’s will make you want to look up where to find one due to an overwhelming amount of cuteness! Pet owners now want something more, something unique to help them stand out from others. Almost all animals are legal in the United States, however due to injuries, danger of extinction, escapes, and health concerns, each state has its own laws in regards to which exotic animals you can own.

Below are a list of 15 exotic animals that you can legally (depending on your state) have as pets. 15- Madagascar Hissing Cockroach- $.25-$3.00 Some may turn their head at the site of one or get grossed out, but many consider this pet to be one of their favorites. Via: Interactive Infographic: Your Daily Dose of Water. Impact of fluoride on neurological development in children. July 25, 2012 — For years health experts have been unable to agree on whether fluoride in the drinking water may be toxic to the developing human brain. 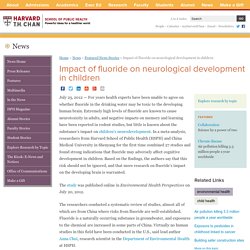 Extremely high levels of fluoride are known to cause neurotoxicity in adults, and negative impacts on memory and learning have been reported in rodent studies, but little is known about the substance’s impact on children’s neurodevelopment. In a meta-analysis, researchers from Harvard School of Public Health (HSPH) and China Medical University in Shenyang for the first time combined 27 studies and found strong indications that fluoride may adversely affect cognitive development in children. Based on the findings, the authors say that this risk should not be ignored, and that more research on fluoride’s impact on the developing brain is warranted. The study was published online in Environmental Health Perspectives on July 20, 2012. * This sentence was updated on September 5, 2012. Read a September 2012 statement by the authors. Live Love Beirut. The Hidden Messages in Water: Masaru Emoto: 9780743289801: Amazon.com: Books.

Spirit Science ~ Water. Water… What is it? 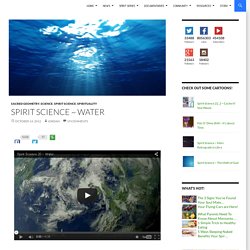 We all interact with water, we’re all made of water, and yet in science today we don’t even really understand what it is. There are many unanswered questions about water and what it is that we really don’t have conclusive answers too. This is actually a wonderful thing, because admitting we know nothing about something gives us an opportunity to find something out. Simply by looking at water you can see there’s something magic about. It’s the source of all of life on earth. We can learn a lot about where bio-organic life came from by looking at water. A lot of this information is present today because a scientist – Dr. His work opened the floodgates towards discovering what water actually is everywhere. In lesson 1, we talked about Emoto’s research into what Water is, and many skeptics cried out that there were triple blind studies done with the same experiment, and it yielded results that didn’t quite add up to Emoto’s work.

With love, Jordan. Water supply and sanitation in Lebanon. This article was last updated in December 2013. 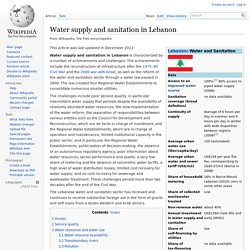 Water supply and sanitation in Lebanon is characterized by a number of achievements and challenges. The achievements include the reconstruction of infrastructure after the 1975–90 Civil War and the 2006 war with Israel, as well as the reform of the water and sanitation sector through a water law passed in 2000. The law created four Regional Water Establishments to consolidate numerous smaller utilities. The Lebanese water and sanitation sector has received and continues to receive substantial foreign aid in the form of grants and soft loans from a dozen Western and Arab donors. Access[edit] The UN statistics show no data on access to sanitation in Lebanon.[1] The World Bank quotes estimates by the Council for Development and Reconstruction showing a 58% share of connection to sewers in 2002. Service quality[edit] The quality of water service provision is poor.