10 Habits That Will Clear Your Mind And Cultivate Happiness. People say, “Happiness starts from within.” 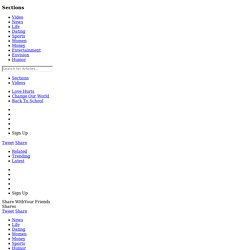 Nothing could be more true. You can’t expect anyone or anything to give you the fulfillment you crave. You have to find that for yourself. But what if tackling your whole emotional well-being feels like too daunting of a task? What if you just want to feel a little bit more motivated, more energized and all-around happier, right now? Good news: There are ways you can start improving your happiness by simply making a few adjustments to your environment and the way you interact with it. Think of the following as your happiness starter pack: 1. The cleanliness of your living space can have a huge impact on the cleanliness of your mind. As someone who has spent 18 years defending her messy room in the interest of “creativity,” I feel like I’m allowed to say this. Having a clean room and a clean mind has increased my creativity and made me a much happier person. 2.

Seriously, do it. For instance, I’ve done a lot of crappy art projects in my life. Businessinsider. Flickr/meenakshi madhavan Humans began speaking 50,000-100,000 years ago, and the “oral tradition” has molded societies for millennia. 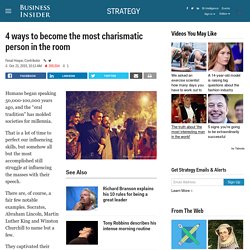 That is a lot of time to perfect our influencing skills, but somehow all but the most accomplished still struggle at influencing the masses with their speech. There are, of course, a fair few notable examples. Socrates, Abraham Lincoln, Martin Luther King and Winston Churchill to name but a few. They captivated their audiences with their every word. It didn’t matter how many people they were speaking to; their speeches were such that you felt that they were addressed to every single individual.

Their effortless style was underpinned by a finely-tuned (and barely perceptible) technique that allowed them to put their audience under their spell. Their every movement acted in tandem with their words and every appearance was a multi-dimensional feast for the senses of the audience. In my view, there are four aspects of every charismatic speaker. Eccentric Habits of 8 Geniuses That Make You Smarter. There’s a fascinating link between geniuses and eccentric behavior. 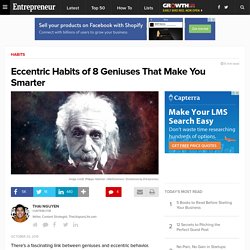 Einstein picked cigarette butts off the street and used the tobacco for his pipe; Benjamin Franklin sat naked in front of a window every morning and let the air circulate over his body. He called it an “air bath”. Their eccentricity isn’t completely without explanation; there are mental benefits behind some of their madness. Here are eight quirky habits from geniuses that will make you smarter: 1. Emilie du Châtelet went unrecognized for her pioneering scientific work in the early 18th century but was notorious for her active sex life. Emilie Wapnick: Why some of us don't have one true calling. ENTJ Personality – Conclusion. ENTJs' intelligence, strong will and logical reasoning skills are a force to be reckoned with. 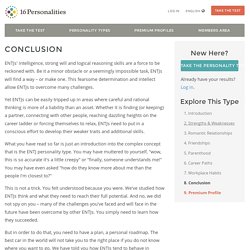 Be it a minor obstacle or a seemingly impossible task, ENTJs will find a way – or make one. This fearsome determination and intellect allow ENTJs to overcome many challenges. What Matters Most in Life? Floating experience right in Dubai - Review of Talise Spa, Dubai, United Arab Emirates. The Emirates Towers spa is awful. 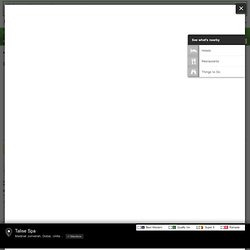 I had an appointment today (at 11am if the management are interested) and in almost every regard it was a DREADFUL EXPERIENCE. They could not find my booking to begin with. Once the lady looked at the correct day, however, the booking was duly located. A bit of a tricky beginning, but recoverable at this point... I had booked a floatation tank treatment and oxygen spa. Unfortunately, the floatation tank was not ready (workmen were trying to empty it as it had been overfilled apparently).

The oxygen spa turns out to involve enduring a mechanical massage from an "Italian massage chair" which I swear, had I not broken free from its clutches, would have fully crushed my legs. I asked to - please - be allowed to proceed with the floatation treatment - but the tank still wasn't ready. After about 10 minutes I was ushered towards the floatation room. I elected to leave at this point. I left with raised blood pressure, sore legs and a jarred back.

Transcendental Meditation® Technique – Official Website. Engaged or Out of It - Jordan Pearce. Have you ever had an experience where you were super engaged with what you were doing? 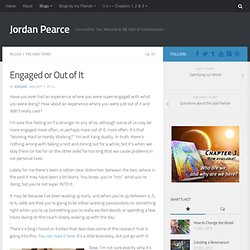 How about an experience where you were just out of it and didn’t really care? I’m sure this feeling isn’t a stranger to any of us, although some of us may be more engaged more often, or perhaps more out of it, more often. It’s that “Working Hard or Hardly Working?” Yin and Yang duality. In truth, there’s nothing wrong with taking a rest and zoning out for a while, but it’s when we stay there (or too far on the other side) for too long that we cause problems in our personal lives. Lately for me there’s been a rather clear distinction between the two, where in the past it may have been a bit blurry.