Romanian Photographer Continues Photographing Women For Her “Atlas Of Beauty” The Best Illustrations from 150 Years of Alice in Wonderland. On July 4, 1862, English mathematician and logician Charles Dodgson boarded a small boat with a few friends. 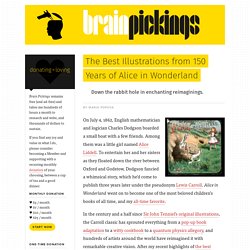 Among them was a little girl named Alice Liddell. To entertain her and her sisters as they floated down the river between Oxford and Godstow, Dodgson fancied a whimsical story, which he’d come to publish three years later under the pseudonym Lewis Carroll. Alice in Wonderland went on to become one of the most beloved children’s books of all time, and my all-time favorite. In the century and a half since Sir John Tenniel’s original illustrations, the Carroll classic has sprouted everything from a pop-up book adaptation to a witty cookbook to a quantum physics allegory, and hundreds of artists around the world have reimagined it with remarkable creative vision. Spectacular Incomplete Horseman Sculptures. We're familiar with Grecian sculptures highly revering the human form, so how does one echo the elegance of such art without mundanely copying it? 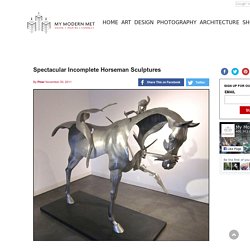 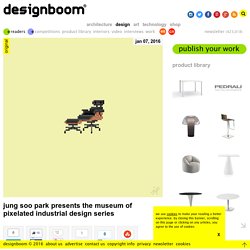 A Fascinating Look At Your Organs From The Inside Out (NSFW) 'Visceral' is a series of striking anatomical portraits created during a collaboration with Colombian illustrator David Pérez and photographer Paola Rojas H - who both live in the Bogota region. 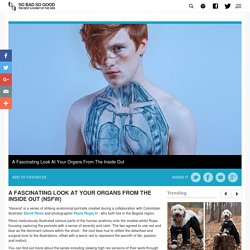 Pérez meticulously illustrated various parts of the human anatomy onto the models whilst Rojas focusing capturing the portraits with a sense of serenity and calm. The two agreed to use red and blue as the dominant colours within the shoot - the cool blue hue to reflect the detached and surgical tone to the illustrations, offset with a warm red to represent the warmth of life, passion and instinct. Beth Cavener - Follow the black rabbit. Best of 2015: Top 13 Breakthrough Tattoo Artists. As the years go by, tattooing has become an increasingly popular way to express yourself. 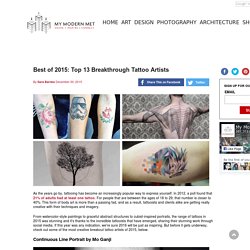 In 2012, a poll found that 21% of adults had at least one tattoo. For people that are between the ages of 18 to 29, that number is closer to 40%. This form of body art is more than a passing fad, and as a result, tattooists and clients alike are getting really creative with their techniques and imagery. Artist Illustrates Unusual and Romantic Holiday Traditions from Around the World.

What better way to celebrate the holiday season than with a series of illustrations that are both whimsical and culturally enlightening? 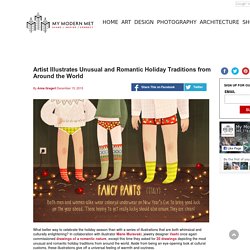 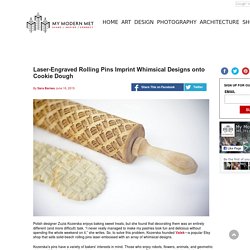 “I never really managed to make my pastries look fun and delicious without spending the whole weekend on it,” she writes. Young Woman Captures Expressive Photos of Cats to Cope with Insecurities and Bullying Memories. Felicity Berkleef can truly say that art changed her life for the better. 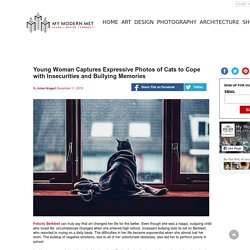 Even though she was a happy, outgoing child who loved life, circumstances changed when she entered high school. Elegant Tattoos of Tools Celebrate Professions Requiring Skilled Hands. Of all the possible ideas for tattoos designs, objects like a spatula and whisk seem like odd choices... unless you're a chef. 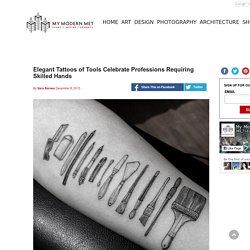 In an effort to (permanently) celebrate professions that require skilled hands, Korean tattoo artist Oozy etches their tools on his clients’ skin. The elegant linework depicts brushes, knives, and scissors, arranged in a neat row that shows off each item in intricate detail. They’re a symbolic, unconventional way to show your love of your chosen career. Not all of Oozy’s work-centric tattoos include a tool lineup, though. He also features hands in motion as they brandish a pair of scissors or slice a fish with a sharp knife. In addition to tools, Oozy tattoos art history with glitch-inspired twist: Artist Illustrates The Brutal Truth About Modern Life. Doodle Challenge Transforms Ordinary Cat Photo into Fantastically Amusing Scenes. 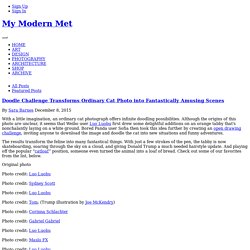 Although the origins of this photo are unclear, it seems that Weibo user Luo Luobu first drew some delightful additions on an orange tabby that's nonchalantly laying on a white ground. Bored Panda user Sofia then took this idea further by creating an open drawing challenge, inviting anyone to download the image and doodle the cat into new situations and funny adventures. The results transform the feline into many fantastical things. With just a few strokes of the pen, the tabby is now skateboarding, soaring through the sky on a cloud, and giving Donald Trump a much needed hairstyle update. And playing off the popular “catloaf” position, someone even turned the animal into a loaf of bread. Original photo Photo credit: Luo Luobu Photo credit: Sydney Scott Photo credit: Tom; (Trump illustration by Joe McKendry) Photo credit: Corinna Schlachter Photo credit: Gabriel Gabriel Photo credit: Maslo FX.

Photographer Breaks "Crazy Cat Lady" Stereotype by Featuring Grown Men with Their Adorable Cats. There are “dog” people and there are “cat” people, and photographer David Williams captures men who identify with the latter group. His project titled Men & Cats began in 2009 as a way to break the stereotype of the “crazy cat lady.”

Williams photographs guys in their homes and on the street with their feline companion close by. The documentary-style images are not only a portrait of people and animals, but of the places that they live. Many of the scenes feature cat-related items that are part of the space they both share. Litter boxes, toys, and feline-related artwork are all visible. David Williams website via [Juxtapoz and Time Out New York] Blind Artist Relies on Touch and Texture to Create Stunningly Vivid Paintings. While art has always been a major part of John Bramblitt's life, it wasn't until he completely lost his sight that he tried to paint for the first time. Galaxy Pendants Made From Glass, Opals, And Gold.

Yes, I would like to carry around a solar system. That’s why the Space Glass by Satoshi Tomizu is so amazing. These glass bubbles have a round opal in the center that looks like a planet surrounded by specks of gold, representing space dust, asteroids, and rogue TV satellites. The glass beads also come with a tiny handle, perfect for carrying a planet as a necklace piece. Satoshi Tomizu started working with heat resistant glass when he was 28 and has gotten really good at it after eight years of practice. His works are so popular that he had to stop taking orders. More info: plusalpha-glass.com | facebook | instagram | twitter (h/t: rocketnews24) Inge prader brings gustav klimt paintings to life using models and props. Nov 17, 2015. Millions Of Stars Decorate Cambridge’s Chapel In Mesmerising Projections. Your Quarter-Life Crisis Summed Up In Illustrated Children’s Rhymes.