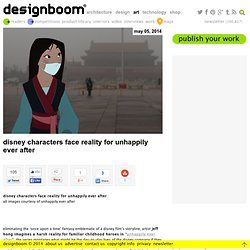 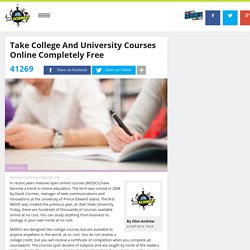 The term was coined in 2008 by David Cormier, manager of web communications and innovations at the University of Prince Edward Island. The first MOOC was created the previous year, at Utah State University. Today, there are hundreds of thousands of courses available online at no cost. You can study anything from business to zoology in your own home at no cost. MOOCs are designed like college courses but are available to anyone anywhere in the world, at no cost. Coursera is perhaps the most well-known of the online education facilitators.

EdX is another non-profit course site created by founding partners Harvard and MIT and based in Cambridge, Massachusetts. 20 More Historic Black and White Pictures Restored in Colour. EmailEmail When we look at black and white photographs, we can’t help but feel that irrational sense that, in the past, the world was actually black and white. 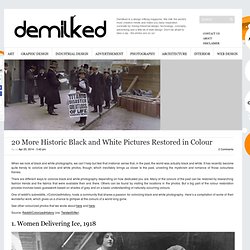 It has recently become quite trendy to colorize old black and white photos, though, which inevitably brings us closer to the past, unveiling the mysticism and romance of those colourless frames. There are different ways to colorize black and white photography depending on how dedicated you are. How Fruits and Vegetables Would Look Under an MRI Scanner. More Brand Slogans Reinterpreted to Tell the Hilarious Truth. Advertising agencies work hard to brand a product and develop a specific slogan to convey the idea behind that brand. 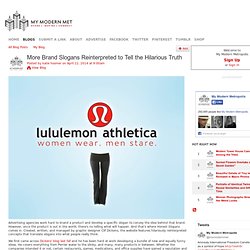 However, once the product is out in the world, there's no telling what will happen. And that's where Honest Slogans comes in. Created, written, and managed by graphic designer Clif Dickens, the website features hilariously reinterpreted concepts that translate slogans into what people really think. We first came across Dickens' blog last fall and he has been hard at work developing a bundle of new and equally funny ideas. He covers everything from Perrier water to the slinky, and many, many products in between. Honest Slogans website. Zdjęcia posiłków, które jedli bohaterowie słynnych powieści. Can You Find Momo The Hide-And-Seek Dog? EmailEmail Andrew Knapp and his beautiful dog Momo the border collie, which we previously wrote about here, have a unique on-going game that they play with thousands of fans all over the world. 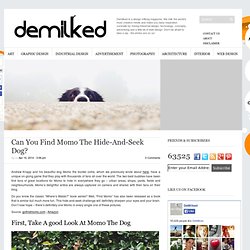 The two best buddies have been find tons of great locations for Momo to hide in everywhere they go – urban areas, shops, yards, fields and neighbourhoods. Momo’s delightful antics are always captured on camera and shared with their fans on their blog. Modern Facts of Life Visualized in Info Graphics. The Forgotten History of Gay Marriage. Editor’s note: This post is a Care2 favorite. 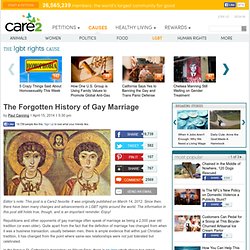 It was originally published on March 14, 2012. Since then, there have been many changes and advancements in LGBT rights around the world. The information in this post still holds true, though, and is an important reminder. Enjoy! Republicans and other opponents of gay marriage often speak of marriage as being a 2,000 year old tradition (or even older). In the famous St. The happy couple are 4th Century Christian martyrs, Saint Serge and Saint Bacchus — both men. The Oldest Living Things On Earth Captured On Camera Before They Disappear Completely. Patatap. Super Planet Crash - Can you feel the gravity? A Soft Murmur. The 10 Gayest Movies Ever Made! Pictured Clockwise from Top Left: Joe Dallesandro; Oliver Reed & Alan Bates in Ken Russell's 'Women in Love'; 'Boys in the Band'; 'Sunday Bloody Sunday'; Raquel Welch in 'Myra Breckenridge'; Bjorn Andresen in 'Death in Venice'; & 'The Damned' The reason these works were so gay is that even if they only included quick images or coded references, they were revolutionary at the time, moving things well into the future with their groundbreaking sexuality. 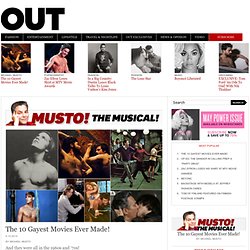 And some of them were less apologetic than others, blazing trails with LGBT wildness that hasn’t necessarily been topped (or even bottomed) all these decades later. Robert Hofler—the Wrap.com critic who’s written books about gay Hollywood figures Rock Hudson and Allan Carr—knows this topic better than anyone. 1. if… Man Spends Four Years and Millions of Dollars Building an Epic Truck for His 4-Year-Old Daughter. For the multi-talented and massively successful Bran Ferren, who is the CEO of tech and design firm Applied Minds, as well as the former President of Research and Development of Walt Disney Imagineering, one of the biggest challenges he's had to face is figuring out how to give his 4-year-old daughter a way to travel the world and gain experience and knowledge while still staying completely safe. 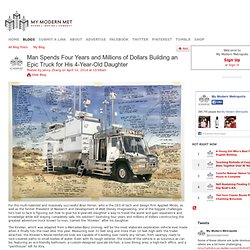 His solution? Spending four years and millions of dollars constructing the greatest adventure truck known to man, named the "KiraVan" after his daughter. The KiraVan, which was adapted from a Mercedes-Benz Unimog, will be the most elaborate exploration vehicle ever made when it finally hits the road later this year. Here Are Some Posters For The Men Who Tell Women What To Do Or What They Think Of Them In The Street.