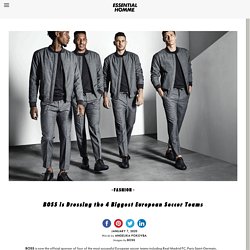 The German brand will make custom pieces for the players on each team, featuring both formal and casual looks. The featured collection is from the BOSS’ Create Your Look initiative that allows men to create a tailored look by combining jackets and pants of the same fabric with different sizes and fits. In the Kitchen at Her Name Was CarmenEssential Homme Magazine. Since opening its doors a year ago, Her Name Was Carmen‘s contagious dancefloor and sumptuous cuisine has been reviving the downtown scene. 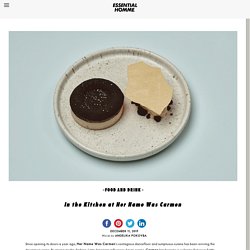 By mixing media, fashion, Latin American influences, haute cuisine, Carmen has become a welcome fixture in SoHo that promises all its patrons a solid good time. We’ve talked with Chef Omar Ben-Hammou to find out more about the behind-the-scenes of the kitchen. Launched by Thatcher Shultz and Andres Diaz, Carmen was always a faraway dream. On its first anniversary, Diaz shared sketches of his dream establishment on Instagram, with some dating back to 2009. And Carmen, as she’s intimately known, is the dream that one never quite achieves — in short, the name comes from a New York tale of a Latin American girl always first on the dancefloor, likes to eat well, sometimes drinks a bit too much tequila, and yet is beloved by everyone. The restaurant itself is Latin-inspired and primarily seafood-based with a strong vegan menu. Truffle Pasta It is. Gucci Announces Plan to Go Completely Carbon-NeutralEssential Homme Magazine. Fashion Wrapping up the year that sustainability became fashionable, Gucci has announced a plan to become carbon-neutral across its supply chain in the near future. 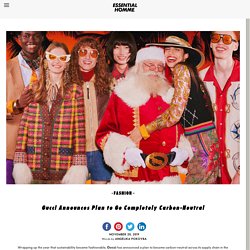 This news follows that the brand is also becoming fur-free. Kering, the Italian designer’s parent company, is already a frontrunner in the sustainability race with over thirty brands joining its sustainability pact this summer. Gucci’s CEO and President Marco Bizzarri took to Instagram to encourage other brands to join the efforts. “As CEOs, we must take responsibility for the total GHG [greenhouse gas] emissions our business activities create,” Bizzari says. Thom Browne is the Latest to Go Co-EdEssential Homme Magazine. Fashion After Versace made a similar announcement last month, Thom Browne is the latest designer to merge his women’s and men’s collections into one show. 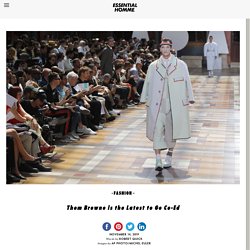 The American designer will present his first co-ed collection for Fall 2020 in Paris on March 1. “There’s been a couple of seasons that I’ve been talking about my collections being connected, and I think it’s time to put that into actual practice,” Browne told WWD. While other brands like Gucci and Salvatore Ferragamo are reviving their men’s shows, more designers are getting adjusted to fewer shows.

Versace announced it will only present two collections a year (similar to Alexander Wang), so the traditional fashion week model continues to evolve for the new decade. First Looks at Thom Browne SS19A departure from his uniform aesthetic, Thom Browne showed a whimsical and fun collection that would be fitting on the Mad Hatter. HUF Opens its Second NYC Store in BrooklynEssential Homme Magazine. Lifestyle View Gallery Another skate store lands in Brooklyn with the opening of HUF‘s newest outpost in Williamsburg. 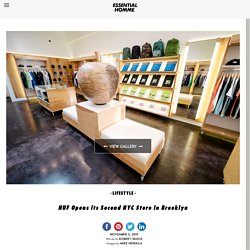 Complementing the street art that dominates the landscape of the neighborhood, the exterior of the new store features an original work by Eric Haze, a Brooklyn-based graffiti artist who’s previously worked with the brand on several collaborations. In addition to carrying the Los Angeles-based label’s range of tees, socks, backpacks, and other accessories, the new boutique will house merchandise exclusive to the location, including a line of limited-edition ‘HUF Brooklyn’ shirts, and also features a “Big Apple” sculpture designed in collaboration with Japanese artist Haroshi that’s featured prominently in the store’s center. 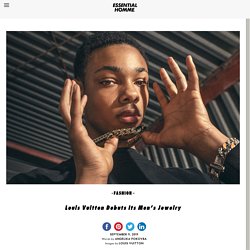 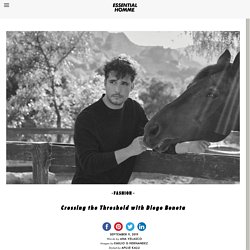 The latest range from the French designer perfectly fuses the structure of urban practicality with a timeless bucolic sophistication. The collection is available online now. Diego Boneta might still be a fresh name in Hollywood, but in Mexico, where he was born, he needs no introduction. It’s only one of the similarities he has with Luis Miguel, the Puerto Rican-born Mexican icon he portrays in the eponymous Netflix hit series. Both started their careers at young ages and became heartthrobs almost immediately, a combination of their talents and good looks. Boneta’s transition from household name in his home country to rising star in his adopted one (he moved to Los Angeles in 2007) has been humbling, especially as a Mexican actor who was found “too white to be Latin and too Latin to be white.”

I call Boneta to discuss his career, both past and present. Book a Sustainable Vacation During the Climate StrikeEssential Homme Magazine. Today the world stands with Great Thunberg’s global climate strike calling out to both governments and the community to go green. 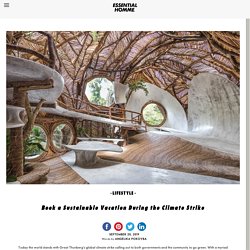 With a myriad of options available, it’s time to consider a more ecologically friendly accommodation for your next travel plans too. See our top choices below: AZULIK — Tulum, Mexico A storybook puzzle of suspended wooden paths winds through the Mexican jungle at AZULIK, immediately connecting one with the natural surroundings. The destination employs only sustainable practices, relying on candlelight instead of electricity.

WHITEPOD — Valais, Switzerland Away from après-ski chalet living, Whitepod is not just another hotel. VIVOOD — Alicante, Spain. Exclusive: A Day in the Life of Dave EastEssential Homme Magazine. View Gallery. 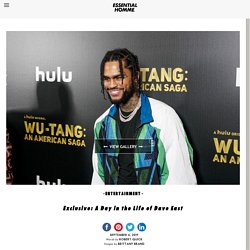