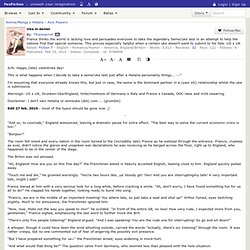 This is what happens when I decide to take a seme/uke test just after a Hetalia-personality thingy... I Don't Come to Meetings for This!, a hetalia - axis powers fanfic. Here is the oneshot for silverheartlugia2000 for winning my Halloween contest. 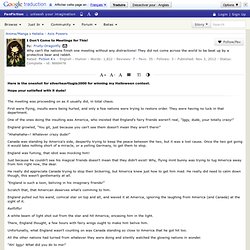 Hope your satisfied with it dude! The meeting was proceeding on as it usually did, in total chaos. First were flying, insults were being hurled, and only a few nations were trying to restore order. They were having no luck in that department. One of the ones doing the insulting was America, who insisted that England's fairy friends weren't real, "Iggy, dude, your totally crazy! " Katzchen, a hetalia - axis powers fanfic. The vicious smirk on his lips stretched wider. 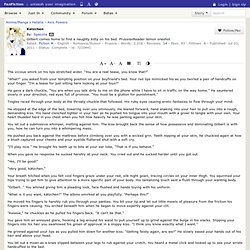 "You are a real tease, you know that? " Canada's Invisibilty Cloak, a hetalia - axis powers fanfic. I wanted to make a small drabble of Canada. 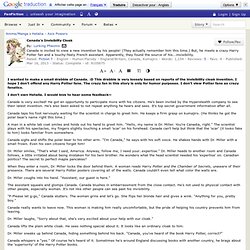 :D This drabble is very loosely based on reports of the invisibility cloak invention. I hope I don't offend any Harry Potter fans. The crazy fan in this story is only for humor purposes. I don't view Potter fans as crazy fanatics. Burger Withdrawal, a hetalia - axis powers fanfic. Disclaimer: I am pretty darn sure that I don't own Hetalia. 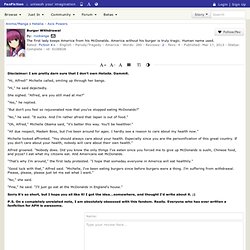 Dammit. "Hi, Alfred! " Michelle called, smiling up through her bangs. "Hi," he said dejectedly. She sighed. "Yes," he replied. "But don't you feel so rejuvenated now that you've stopped eating McDonalds? " "No," he said. "Oh, Alfred," Michelle Obama said, "it's better this way. You're my Bitch, a hetalia - axis powers fanfic. Shinigami-cat: Damn… this is going to… I um… I have no idea what inspired me to write this… It's my first time writing something like this and I'm really nervous about posting it so be nice… I OWN NOTHING! 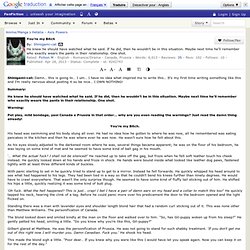 Summary: He knew he should have watched what he said. If he did, then he wouldn't be in this situation. Maybe next time he'll remember who exactly wears the pants in their relationship. One shot. Hetalia and Smosh Crossover: Prussia's Bot Best Friend, a Hetalia - Axis Powers + Web Shows Crossover fanfic. "West! 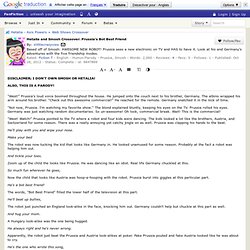 " Prussia's loud voice boomed throughout the house. He jumped onto the couch next to his brother, Germany. The albino wrapped his arm around his brother. "Check out this awesome commercial! " He reached for the remote. Prussia's little visit, a hetalia - axis powers fanfic. First PruHun Fic. 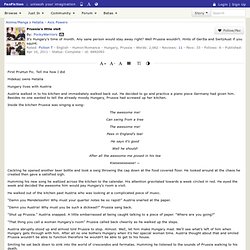 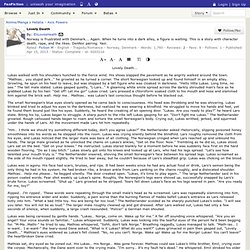 Lukas walked with his shoulders hunched to the fierce wind. His shoes slapped the pavement as he angrily walked around the town. "Mathias… you stupid jerk…" he growled as he turned a corner. The short Norwegian looked up and found himself in an empty alley. Growling, he spun on his heel to leave, but was stopped by a tall figure who was cloaked in darkness. Viking Law, a hetalia - axis powers fanfic. Some laws stick around longer than they should. 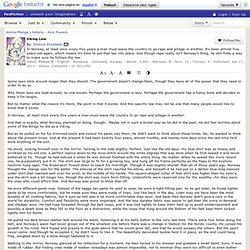 The government doesn't change them, though they have all of the power that they need in order to do so. Why these laws are kept around, no one knows. Perhaps the government is lazy. Perhaps the government has a funny bone and decided to keep it for laughs. But no matter what the reason it's there, the point is that it exists. In Norway, at least once every five years a man must leave the country to go rape and pillage in another. And that is exactly what Norway planned on doing, though… Maybe not in such a brutal way as he did in the past.

But as he pulled on his fur-trimmed boots and tucked his pants into them, he didn't want to think about those times. What happend to denmark? Chapter 2, a hetalia - axis powers fanfic. Okay, chapter 2 is here~! I do not own the song in it, rascal flatts own it, and i DO NOT own hetalia. The next morning norway woke up to smell the smell of cooking, more like baking, pastries, Danishes. He got up, and got dressed in his discarded outfite from the day before, and walked down the stairs silently, rubbing his bark blue eyes, and walked into the kitchen, unseen by the short danish girl baking her famous pastries. she was singing a soft song, dancing slightly(twirling around the room),"I set out on a narrow way many years agoHoping I would find true love along the broken roadBut I got lost a time or twoWiped my brow and kept pushing throughI couldn't see how every sign pointed straight to you Every long lost dream led me to where you areOthers who broke my heart they were like Northern starsPointing me on my way into your loving armsThis much I know is trueThat God blessed the broken roadThat led me straight to you.

Every You, Every Me, a hetalia - axis powers fanfic. Just a quick oneshot I wrote while waiting for the doctor for our appointment today. I tried to do something different with working on a DenNor fic instead of my usual USUK, SpaMano ones. Forgive me if they're OOC. I'm not at all used to working with the Nordics yet. :/ I wish I could understand and work with them better. The Mafia and the Militär, a hetalia - axis powers fanfic. This is the companion backstory for Feliciano and Ludwig that accompanies my full fic: Its Just Business. This is the story of how the made man and the soldier met, how Feliciano became the Mafioso he later is, and Ludwig his devoted Capo.

Note: Ludwig doesn't have a last name according to hetalia archives, so I gave him his brother's in this. A soldier needs a last name. I used real battles in WW1, and a some real personages and places from the time. Tomato Siesta, a hetalia - axis powers fanfic. "Fuck you, tomato bastard! Look at what you did! You interrupted my siesta! And now I can't go back to sleep! " Lovino threw off the blankets, face red with fury. He was about to drift off to Dreamland, when the bastard came in, slamming the door. "What did I do? " Lovino face palmed and flopped back down on the pillows, groaning loudly.

Sometimes Antonio was like that. Nightmares for Love, a hetalia - axis powers fanfic. Okay so this is my fist Hetalia fanfiction and I've recently been obsessed with Spamano, so i decided to make my story about them. So without further explanation, my terrible Spamano fanfiction. "AHHH HELP SOMEONE. " Romano ran through what looked like an underground prison. He tripped and landed hard on the ground and blacked out. Gakuen Hetalia Clone High by ~fiori-party on deviantART. Letters to a German Chapter 1, a hetalia - axis powers fanfic. The Awesome Companion, a Doctor Who + Hetalia - Axis Powers Crossover fanfic. The Awesome Companion. Thomas Jefferson & His Democracy: Crash Course US History #10. What are Continents? ➨ a bad, ᵇᵃᵈ day for James Williams~ ▷2Ｐ! Ｃａｎａｄａ◁ Hatafutte Parade: Japan (eng sub) The Doctor's Worldly Adventures Chapter 3: Spinning into the Past, a Doctor Who + Hetalia - Axis Powers Crossover fanfic.

Comfortably inebriated, yes, but not drunk enough to spill his darkest secret to France. Who had promptly texted this information to Romano. Spain was lucky it hadn't been the whole world, knowing France, but right now he had to go home and likely face a disgusted and disgruntled Romano, hungover nonetheless. This was just not his day.Opening the door, he was greeted with the sound of the television on in the living room, which meant Romano was laying on the couch, pretending to watch soaps. Before going to face his doom, Spain decided to pity himself and pour another drink. Addicted (SpaMano) [Doujinshi] ENG. APH - The Heaven Is Barbarous [Spamano Doujinshi R-18] (Ita) Doujinshi hetalia yaoi spamano. Itacest dirty little secret [APH] PruCan - Dirty Little Secret. Who Knew PruCan. Call Me Maybe Hetalia CMV. Rumour Has It // FACE CMV. Waking up in Vegas - a Hetalia CMV.

CMV Hetalia Style! (Gangnam Style 강남스타일 Parodie) [Nyotalia] Carrot and Stick. Nyo!Carrots and Sticks-With English subtitle. ~ [BMT R1] Somebody that I use to know //Dark!talia ~ [APH MMD] My mochi is 4WD. WITH TURKEY - SUBS. Hatafutte Parade: Turkey Version ~ Hetalia World Series~ (w/Lyrics) {APH} Carrots and Sticks. Absolutely Invincible British Gentleman- England (Lyrics in Description) America- Hamburger Street (with lyrics) Hatafutte Parade - Russia's Version [Full] [APH] Hatafutte Parade - Together. Hetalia 1800 - The Age of Beginnings and Ends. Winter- Russia (with lyrics) Hard Times and Strange Minds Chapter 7: Who? Part 3: The Resolution, a hetalia - axis powers fanfic. There were only a handful of times in Canada's relatively short life (compared to the other nations at least) where he could honestly and without embarrassment say he was shit-your-pants scared.

The first was when he was but a little colony, and America (of course) decided it would be a super cool idea to go down Niagara Falls in an old pickle barrel England had brought over on his last visit. Needless to say, he limped away with a mild concussion, a broken arm, a fractured shin, and a soiled pair of trousers. The next was sometime not long after WWII had ended. England had mistaken him for America (of course), and accidentally let loose his arsenal of Halloween thrills and chills on him rather than his brother. Now-a-days Canada stayed as far away from those two come October as nationally possible. The next notable incident was the morning after a Christmas party some time in the early 80's. He didn't want to think about that one. This was quickly becoming one of those times.

"тры. " July Mornings, a hetalia - axis powers fanfic. ~Her birthday is normally forgotten, so what happens when Mattie Williams is suddenly visited by a certain Albino? Depervation, a hetalia - axis powers fanfic. Fifteen Chapter 1: Start, a hetalia - axis powers fanfic. It was her first day in a strange town about 100 miles away from her hometown. She sighed as she adjusted the shoulder bag backpack and walked toward the large doors in front of a large building, high school. The school in itself was not unfriendly, but the looks she got were unnerving to her, since she had grown up in a small town, where the whole town was mostly people from your neighborhood. She again adjusted her bag, and secured the zipper just to be safe, then started toward her doom. Instantly she was greeted with a crowed lobby of yelling freshman, along with the other upper classmen, and took out her Advil, just to be safe.