Body Systems. Endocrine System: Discover the Anatomy and Function of Glands. The endocrine system includes all of the glands of the body and the hormones produced by those glands. 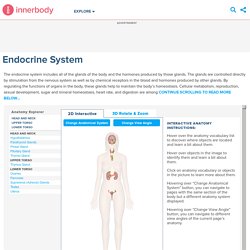 The glands are controlled directly by stimulation from the nervous system as well as by chemical receptors in the blood and hormones produced by other glands. By regulating the functions of organs in the body, these glands help to maintain the body’s homeostasis. Cellular metabolism, reproduction, sexual development, sugar and mineral homeostasis, heart rate, and digestion are among Continue Scrolling To Read More Below... Continued From Above... Endocrine System - KidsHealth. Listen Problems With the Endocrine System Too much or too little of any hormone can be harmful to the body. 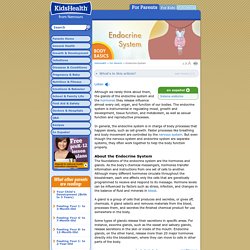 For example, if the pituitary gland produces too much growth hormone, a child may grow excessively tall. If it produces too little, a child may be abnormally short. Controlling the production of or replacing specific hormones can treat many endocrine disorders in children and adolescents, some of which include: Endocrine System: MedlinePlus. Endocrine system. Fluoride in Drinking Water: A Scientific Review of EPA's Standards. Few exposure groups, with, for example, the “high”-fluoride group in one study having lower concentrations of fluoride in drinking water than the “normal”-fluoride group in another study. 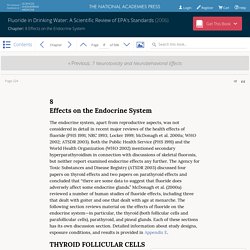 In general, the human exposures are not well characterized. Nevertheless, there is consistency among the available studies in the types of effects seen in humans and animals and in the concentrations or fluoride exposures associated with the effects in humans. For all the endocrine effects reported to occur from fluoride exposure, the variability in exposure and response among populations (or strains of an experimental animal) or within a human population requires further attention. For example, correlations between the fluoride intake or the presence or degree of fluorosis and the presence (or prevalence) or severity of other effects generally have not been examined on an individual basis, which could permit identification of individual differences in susceptibility or response. 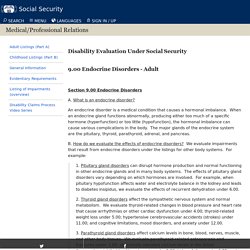 What is an endocrine disorder? An endocrine disorder is a medical condition that causes a hormonal imbalance. When an endocrine gland functions abnormally, producing either too much of a specific hormone (hyperfunction) or too little (hypofunction), the hormonal imbalance can cause various complications in the body. Endocrine System. Listen Things That Can Go Wrong Too much or too little of any hormone can be harmful to your body. 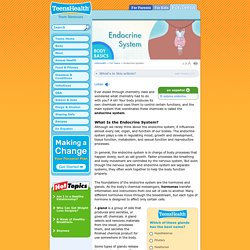 For example, if the pituitary gland produces too much growth hormone, a teen may grow excessively tall. If it produces too little, a teen may be unusually short. Doctors can often treat problems with the endocrine system by controlling the production of hormones or replacing certain hormones with medication. Endocrine problems that can affect teens include: Adrenal insufficiency. Type 1 diabetes. Type 2 diabetes. Growth hormone problems. 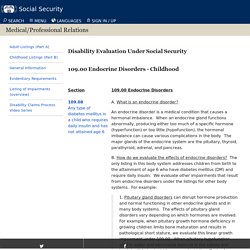 What is an endocrine disorder? An endocrine disorder is a medical condition that causes a hormonal imbalance. When an endocrine gland functions abnormally, producing either too much of a specific hormone (hyperfunction) or too little (hypofunction), the hormonal imbalance can cause various complications in the body. Human Anatomy: Learn All About the Human Body at InnerBody.com. Definition of endocrine system by Medical dictionary. System [sis´tem] 1. a set or series of interconnected or interdependent parts or entities (objects, organs, or organisms) that act together in a common purpose or produce results impossible by action of one alone. 2. an organizedset of principles or ideas.adj. 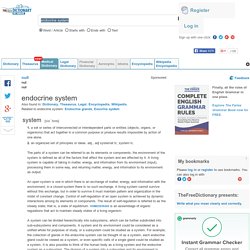 Endocrine gland hormone review (video) Endocrine System - Everything You Need to Know. The endocrine system consists of several glands located throughout the body. 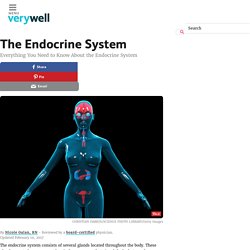 These glands secrete hormones -- chemical messengers that signal the body to perform essential functions, usually related to growth and metabolism. There are two types of glands within the endocrine system. Endocrine glands include the pancreas, thyroid, pituitary and adrenal glands. They secrete their hormones directly into the bloodstream, where they are carried to the site of action. Exocrine glands secrete their hormones directly into ducts. How Do Hormones Work? Endocrine System: Facts, Functions and Diseases. The endocrine system is the collection of glands that produce hormones that regulate metabolism, growth and development, tissue function, sexual function, reproduction, sleep, and mood, among other things. 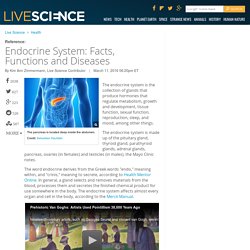 The endocrine system is made up of the pituitary gland, thyroid gland, parathyroid glands, adrenal glands, pancreas, ovaries (in females) and testicles (in males), the Mayo Clinic notes. The word endocrine derives from the Greek words "endo," meaning within, and "crinis," meaning to secrete, according to Health Mentor Online. In general, a gland selects and removes materials from the blood, processes them and secretes the finished chemical product for use somewhere in the body. The endocrine system affects almost every organ and cell in the body, according to the Merck Manual.

Prehistoric Van Goghs: Artists Used Pointillism 38,000 Years Ago [Image Gallery: The BioDigital Human] Hormone levels that are too high or too low indicate a problem with the endocrine system. Additional resources. Endocrine system. In addition to the specialized endocrine organs mentioned above, many other organs that are part of other body systems, such as bone, kidney, liver, heart and gonads, have secondary endocrine functions. 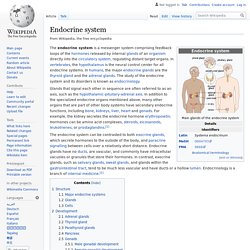 For example, the kidney secretes endocrine hormones such as erythropoietin and renin. Hormones can consist of either amino acid complexes, steroids, eicosanoids, leukotrienes, or prostaglandins.[1] A number of glands that signal each other in sequence are usually referred to as an axis, for example, the hypothalamic-pituitary-adrenal axis.

As opposed to endocrine factors that travel considerably longer distances via the circulatory system, other signaling molecules, such as paracrine factors involved in paracrine signalling diffuse over a relatively short distance. The word endocrine derives from the Greek words ἐνδο- endo- "inside, within," and κρίνειν krinein "to separate, distinguish". Endocrine organs and known secreted hormones[edit] Hypothalamus[edit] Pineal body (epiphysis)[edit] Endocrine system. The endocrine system is a network of glands that produce and release hormones that help control many important body functions, including the body's ability to change calories into energy that powers cells and organs.

The endocrine system influences how your heart beats, how your bones and tissues grow, even your ability to make a baby. It plays a vital role in whether or not you develop diabetes, thyroid disease, growth disorders, sexual dysfunction, and a host of other hormone-related disorders. Glands of the Endocrine System Each gland of the endocrine system releases specific hormones into your bloodstream. These hormones travel through your blood to other cells and help control or coordinate many body processes.