Halloween creeps into Swiss popular culture. On Friday children across Switzerland will be dressing up as witches, ghosts and monsters and carving ghoulish faces into pumpkins to celebrate Halloween. 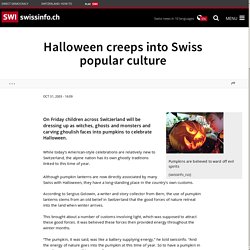 While today’s American-style celebrations are relatively new to Switzerland, the alpine nation has its own ghostly traditions linked to this time of year. Although pumpkin lanterns are now directly associated by many Swiss with Halloween, they have a long-standing place in the country’s own customs. According to Sergius Golowin, a writer and story collector from Bern, the use of pumpkin lanterns stems from an old belief in Switzerland that the good forces of nature retreat into the land when winter arrives.

Valais shaken by 4.2 magnitude earthquake - The Local. The earthquake hit in the canton of Valais near Sierre. 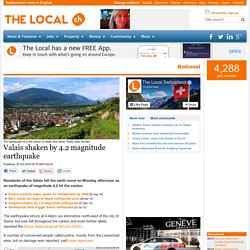 Photo: Alain Rouiller Residents of the Valais felt the earth move on Monday afternoon as an earthquake of magnitude 4.2 hit the canton. Carli Lloyd unleashes golazo for USA vs. Switzerland (VIDEO) USA vs Switzerland: USWNT nets four in second half of win (VIDEO) Police discover body buried in Orbe house - The Local. Police have opened an investigation after finding a body buried in a house in Orbe, in the canton of Vaud, on Saturday. 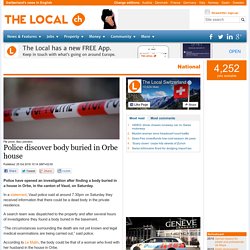 In a statement, Vaud police said at around 7.30pm on Saturday they received information that there could be a dead body in the private residence. A search team was dispatched to the property and after several hours of investigations they found a body buried in the basement. “The circumstances surrounding the death are not yet known and legal medical examinations are being carried out,” said police. According to Le Matin, the body could be that of a woman who lived with her husband in the house in Orbe. Whatever you do, don't become Switzerland, Swiss academics tell UK. Proponents of Britain leaving the European Union often point to the Swiss experience as an instructive example of the benefits of life outside the EU. 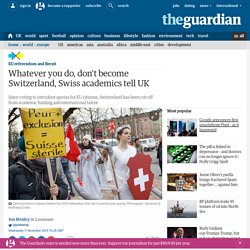 That’s not the way Caroline Vandevyver sees it. When Switzerland decided to hold a referendum last year on mass immigration, Vandervyver, a biochemist who coordinates funding at the renowned École Polytechnique Fédérale de Lausanne (EPFL), was relaxed about the possible consequences. Inequality Fight: Swiss Will Vote on Minimum Income - Businessweek. Marilola Wili braces her foot against the wall to pull open a vault door inside a former bank building in downtown Basel. 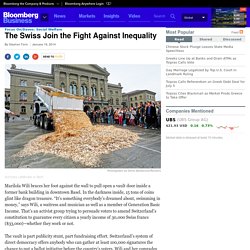 In the darkness inside, 15 tons of coins glint like dragon treasure. “It’s something everybody’s dreamed about, swimming in money,” says Wili, a waitress and musician as well as a member of Generation Basic Income. That’s an activist group trying to persuade voters to amend Switzerland’s constitution to guarantee every citizen a yearly income of 30,000 Swiss francs ($33,000)—whether they work or not.