Experience is what matters and at Hackastack, experience is what you gain, right from day 1! Real world applications, live client work, and group projects are the heart of all Hackastack bootcamps and these ensure you learn right, learn in-depth, and learn only what’s relevant.

Entrepreneurship / Startups. The Great Indian Deficiency: Entrepreneurship. One can’t help sit back and wonder; are salaried jobs the only way to engage young minds? 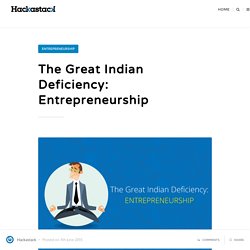 Thanks to our age-old ‘traditions’ and school of thought, young children are more often than not planted onto professional paths by their parents and sometimes even their grandparents. And this happens even before they begin to explore their likes and dislikes, their passion, and what the world has to offer them! Post schooling, most graduates are trained by their parents, their teachers, and their educators to approach life in a safe, risk-free manner.

The ultimate goal for most is to bag an MNC job or become a doctor, lawyer, or an engineer. A negligible few dare to rebel against the norms and chart their own path, only to be discouraged by most. With a growth rate of 8% that is steadily increasing and an enormous population base consisting of people from varied professions possessing innumerable skills, India is booming in every possible domain. But, the question persists. Why Should You Join a Startup? With a million startups having mushroomed all over the globe and changing the way we do just about anything, it wouldn’t be wrong to declare 2014 as the ‘Year of Startups’. 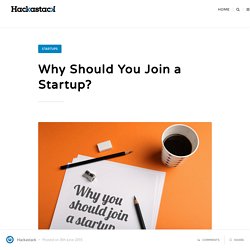 In continuation of our earlier blog, Why India Needs More Entrepreneurs, here’s our view on Why You Should Join A Startup. The first obvious reason would be because startups are established by passionate entrepreneurs! The more people join startups, the more the entire startup culture gets a boost, eventually resulting in more entrepreneurs! But yes, being a startup ourselves, we are more than familiar with the usual questions that crowd a young graduate’s mind: Ignore the MNC offer and join a ‘just-established-not-even-named-startup? And, to add to this, our ever-skeptical family and peers make it no easier to decide.

“We’re not really good at knowing what we want, and are very quick to say ‘this sucks.’ One of the most striking aspects of working in a startup is the amount of learning that happens on the job. 10 Highest Paid Programming Languages. A common question raised by people wishing to enter the tech industry is about the highest paid programming languages. 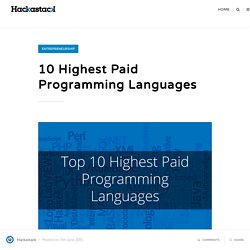 Knowing different programming languages will definitely fetch you good money! While this is an ongoing discussion, there is an acute shortage of quality programmers all over the world currently. A Venturebeat report claims that by 2020, a whopping 1 million programming jobs will be left vacant due to the alarmingly low numbers of qualified developers. Here we list the 10 highest paid programming languages. Ruby on Rails (RoR) “Rails is the killer app for Ruby.” If you can write programs using Ruby on Rails (RoR), consider your life made. Key Facts: Ruby on Rails (ROR) is an open Source softwareROR uses MVC (model-view controller) patternRuby on Rails has a self-documentation feature, reducing the time taken by the developer to create a separate documentation Objective C “Objects come to the good old C.”

Python Python is the “most powerful language you can still read.” Java. Full Stack Devloper. Phase I - The Building BlocksDeploy your first real-world project Get started with the basics of front-end development by learning HTML, CSS, jQuery, AJAX, and JSON. 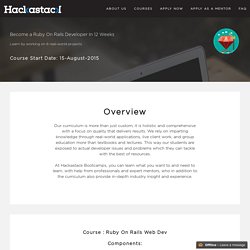 Along the way, master concepts such as object oriented programming, algorithms, data structures and test driven development by tackling over 40 code challenges. Once the front-end basics are in place, dive right into understanding RoR – Ruby, a programming language and Rails, a popular framework for rapidly building Ruby on Rails projects. Project Options Task Management Project Zomato Clone Phase II - Real-World projectsDeploy fully functional and complex real-world project Now that the fundamentals are in place, it’s time to get down to some serious development business and take your skills to the next level. Netflix Clone Hootsuite Clone Phase III - Capstone Project This phase follows a less guided approach. Phase IV - Peripheral Skills This is why Hackastack’s bootcamps are different! Hackastack.