Dead Island. Dead or Alive. The gameplay of Dead or Alive was unique at the time of its debut because it featured different choices in gameplay than other 3D fighting games (at least at the time). 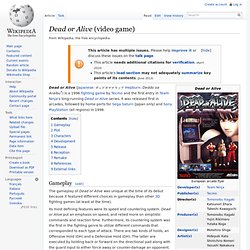 Its most defining features were its speed and countering system. Dead or Alive put an emphasis on speed, and relied more on simplistic commands and reaction time. Furthermore, its countering system was the first in the fighting genre to utilize different commands that corresponded to each type of attack. There are two kinds of holds, an Offensive Hold (OH) and a Defensive Hold (DH). Dead or Alive 2. Gameplay[edit] A fight in DOA2 on the Dreamcast In DOA2, the basis of the entire fighting system is the circular relationship between three types of moves: holds, throws, and blows.The other defining feature of DOA2, aside from holds/throws/blows, is its stun system. 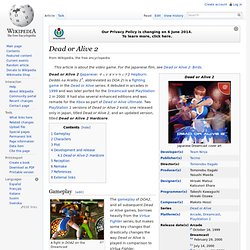 Characters[edit] Defender. Defender was one of the most important titles of the Golden Age of Arcade Games, selling over 55,000 units to become the company's best selling game and one of the highest-grossing arcade games ever. 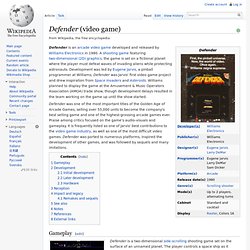 Praise among critics focused on the game's audio-visuals and gameplay. It is frequently listed as one of Jarvis' best contributions to the video game industry, as well as one of the most difficult video games. Desert Strike: Return to the Gulf. Desert Strike: Return to the Gulf, commonly known as Desert Strike, is a shoot 'em up video game released by Electronic Arts (EA) in February 1992 for Sega's Mega Drive.[1] The game was later released on several other formats such as the SNES, including a much upgraded version for the Amiga home computer. 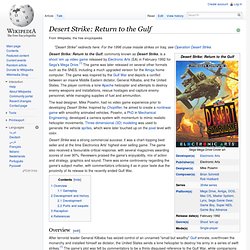 The game was inspired by the Gulf War and depicts a conflict between an insane Middle Eastern dictator, General Kilbaba, and the United States. The player controls a lone Apache helicopter and attempts to destroy enemy weapons and installations, rescue hostages and capture enemy personnel, while managing supplies of fuel and ammunition. Desert Strike was a strong commercial success: it was a chart-topping best seller and at the time Electronics Arts' highest ever selling game. The game also received a favourable critical response, with several magazines awarding scores of over 90%. Reviewers praised the game's enjoyability, mix of action and strategy, graphics and sound. Overview[edit] Jungle Strike. Urban Strike. Diablo II. By April 2001, Diablo II had become one of the most popular online games of all time. 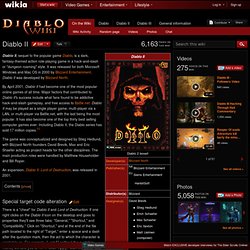 Major factors that contributed to Diablo II's success include what fans found to be addictive hack-and-slash gameplay, and free access to Battle.net. Diablo II may be played as a single player game, multi-player via a LAN, or multi-player via Battle.net, with the last being the most popular. It has also become one of the top thirty best selling computer games ever.

Including Diablo II, the Diablo series has sold 17 million copies.[1] The game was conceptualized and designed by Stieg Hedlund, with Blizzard North founders David Brevik, Max and Eric Shaefer acting as project heads for the other disciplines. An expansion, Diablo II: Lord of Destruction, was released in 2001. Dirt 3. Dirt 3 (stylised DiRT 3) is a rallying video game and the third in the Dirt series of the Colin McRae Rally series, developed and published by Codemasters. 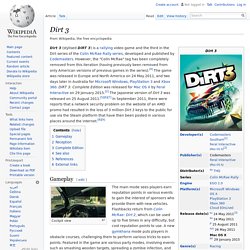 However, the "Colin McRae" tag has been completely removed from this iteration (having previously been removed from only American versions of previous games in the series).[4] The game was released in Europe and North America on 24 May 2011, and two days later in Australia for Microsoft Windows, PlayStation 3 and Xbox 360. DiRT 3: Complete Edition was released for Mac OS X by Feral Interactive on 29 January 2015.[2] The Japanese version of Dirt 3 was released on 25 August 2011.[5][6][7] In September 2011, there were reports that a network security problem on the website of an AMD promo had resulted in the loss of 3 million Dirt 3 keys to the public for use via the Steam platform that have then been posted in various places around the internet.[8][9] Gameplay[edit] Reception[edit] Complete Edition[edit] See also[edit] References[edit] 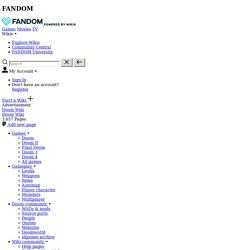 For other topics with similar names, see Doom2. Doom II: Hell on Earth, released on September 30, 1994, is the first sequel to Doom. Double Dragon. Double Dragon​ (ダブルドラゴン) is a 1987 beat 'em up developed by Technos Japan and distributed in North America and Europe by Taito Corporation. 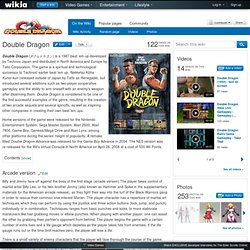 The game is a spiritual and technological successor to Technos' earlier beat 'em up, Nekketsu Kōha Kunio-kun (released outside of Japan by Taito as Renegade), but introduced several additions such as two-player cooperative gameplay and the ability to arm oneself with an enemy's weapon after disarming them. Double Dragon is considered to be one of the first successful examples of the genre, resulting in the creation of two arcade sequels and several spinoffs, as well as inspiring other companies in creating their own beat 'em ups. Home versions of the game were released for the Nintendo Entertainment System, Sega Master System, Atari 2600, Atari 7800, Game Boy, Genesis/Mega Drive and Atari Lynx, among other platforms during the series' height of popularity. 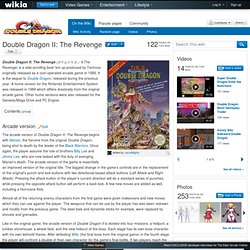 It is the sequel to Double Dragon, released during the previous year. A home version for the Nintendo Entertainment System was released in 1989 which differs drastically from the original arcade game. Other home versions were also released for the Genesis/Mega Drive and PC Engine. Arcade version Edit. Drop. Duck Hunt. Duck Hunt (Japanese: ダックハント, Hepburn: Dakku Hanto?) 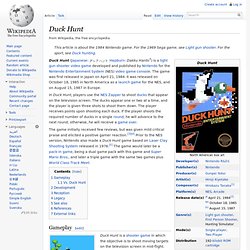 Is a light gun shooter video game developed and published by Nintendo for the Nintendo Entertainment System (NES) video game console. The game was first released in Japan on April 21, 1984. It was released on October 18, 1985 in North America as a launch game for the NES, and on August 15, 1987 in Europe. Dungeon Keeper. Dungeon Keeper is a strategy video game developed by Bullfrog Productions under Peter Molyneux and released by Electronic Arts in July 1997 for the PC in which the player attempts to build and manage a dungeon or lair while protecting it from invading 'hero' characters intent on stealing the player's accumulated treasures and killing various monsters. This was Molyneux's final project with Bullfrog before he left the company in August 1997 to form Lionhead Studios.

Gameplay[edit] A player navigates the built-up dungeon with the Hand of Evil. The player uses a mouse, represented in-game as a hand, to interact with a bar on the left-hand side of the screen, allowing them to select which rooms to build and which spells to cast. Donkey Kong (Game & Watch) Donkey Kong Jr. (Game & Watch) Donkey Kong II. Donkey Kong. Donkey Kong is an arcade game that was released by Nintendo in 1981. The game is an early example of the platform genre as the gameplay focuses on maneuvering the main character across a series of platforms while dodging obstacles. The storyline is thin but well-developed for its time. In it, Mario (originally called Jumpman) must rescue a damsel in distress, Pauline (originally called Lady), from a giant ape named Donkey Kong. The hero and ape went on to become two of Nintendo's most popular characters.