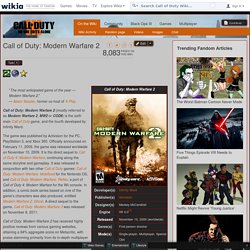 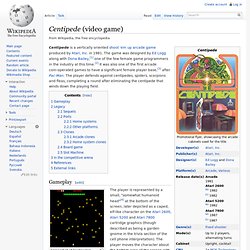 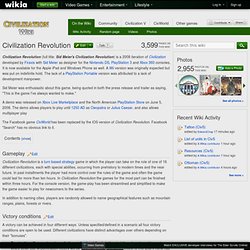 It is now available for the Apple iPad and Windows Phone as well. A Wii version was originally expected but was put on indefinite hold. Colin McRae Rally. Colin McRae Rally is the first game in the Colin McRae Rally series, released in 1998 by Codemasters in Europe, in 2000 in North America on the PC and PlayStation, and in 2001 in Europe on the Game Boy Color. 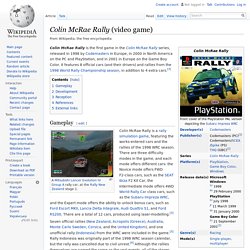 It features 8 official cars (and their drivers) and rallies from the 1998 World Rally Championship season, in addition to 4 extra cars.[3] Seven official rallies (New Zealand, Acropolis (Greece), Australia, Monte Carlo Sweden, Corsica, and the United Kingdom), and one unofficial rally (Indonesia) from the WRC were included in the game.[3] Rally Indonesia was originally part of the 1998 WRC season calendar, but the rally was cancelled due to civil unrest.[4] Although the rallies themselves are named the same as the real events, all of the stages are fictional.[5] Codemasters have cited the arcade game Sega Rally as a strong influence on Colin McRae Rally.[6] Other influences included the PC game Screamer Rally and Nintendo 64 game Wave Race 64.[6] Colin McRae Rally at MobyGames.

Commando. In-game screenshot The player takes control of a soldier named Super Joe,[1] who starts by being dropped off in a jungle by a helicopter, and has to fight his way out singlehandedly, fending off a massive assault of enemy soldiers. 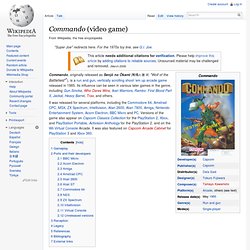 Super Joe is armed with a sub-machine gun (which has unlimited ammunition) as well as a limited supply of hand grenades. While Joe can fire his gun in any of the eight directions that he faces, his grenades can only be thrown vertically towards the top of the screen, irrespective of the direction Joe is facing. Unlike his SMG bullets, grenades can be thrown to clear obstacles, and explosions from well placed grenades can kill several enemies at once. Contra. In Contra, the player controls one of two armed military commandos named Bill "Mad Dog" Rizer and Lance "Scorpion" Bean, who are sent on a mission to neutralize a terrorist group called the Red Falcon Organization that is planning to take over the Earth. 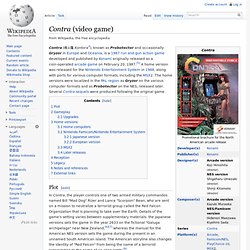 Cookie Clicker. Counter-Strike. Set in various locations around the globe, players assume the roles of members of combating teams that include counter-terrorists and terrorists. 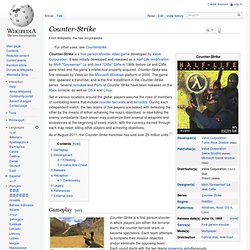 During each independent match, the two teams of five players are tasked with defeating the other by the means of either achieving the map's objectives, or else killing the enemy combatants. Each player may customize their arsenal of weapons and accessories at the beginning of every match, with the currency earned through each map reset, killing other players and achieving objectives. As of August 2011, the Counter-Strike franchise has sold over 25 million units.[1] Gameplay[edit] The player is standing in the terrorist starting zone of de_dust using a CV-47 (AK-47). Standard monetary bonuses are awarded for winning a round, losing a round, killing an enemy, being the first to instruct a hostage to follow, rescuing a hostage or planting (Terrorist) /defusing (Counter Terrorist)the bomb(C4)in the bomb site.

Development[edit] Cheating[edit] Castlevania. Castlevania (known in Japan as Akumajo Dracula ) is the first game in the series of the same title. 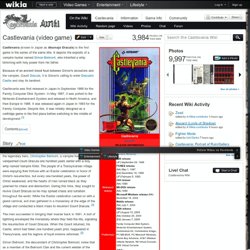 It depicts the exploits of a vampire hunter named Simon Belmont , who inherited a whip brimming with holy power from his father. Because of an ancient blood feud between Simon's ancestors and the vampire, Count Dracula , it is Simon's calling to enter Dracula's Castle and slay its landlord. Castlevania was first released in Japan in September 1986 for the Family Computer Disk System. In May 1987, it was ported to the Nintendo Entertainment System and released in North America, and then Europe in 1988. Castlevania II: Simon's Quest. Castlevania II: Simon's Quest known in Japan as Dracula II: Noroi no Fūin (ドラキュラⅡ 呪いの封印 Dracula II: The Seal of the Curse ), was developed by Konami in 1987 for the Famicom Disk System . 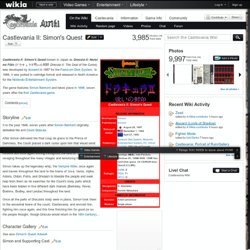 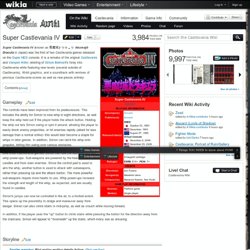