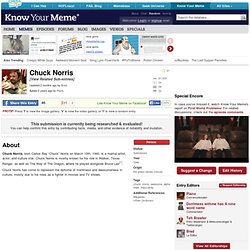 Chuck Norris is mostly known for his role in Walker, Texas Ranger, as well as The Way of The Dragon, where he played alongside Bruce Lee. Chuck Norris has come to represent the epitome of manliness and awesomeness in culture, mostly due to his roles as a fighter in movies and TV shows. The meme Chuck Norris Facts plays off of this, as all the “facts” deal with Norris’ ability to do anything because of his manliness. He can also be seen in many pictures holding two automatic machine guns and/or having an exposed chest, as seen below. Movies and Television Shows Norris’s first movie was Dean Martin’s, The Green Berets, in 1968. In 1972, he acted as Bruce Lee’s nemesis in Way of the Dragon, possibly one of his most memorable roles, and most likely (Coupled with Walker Texas Ranger) what made him rise to fame as one of the most widely-recognized martial artists in America. Memes. Epic Beard Man. About Epic Beard Man is the nickname for Oakland resident Thomas Bruso that was coined after a video in which he repeatedly punches a younger black man, identified only as Michael, was spread online in February of 2010. 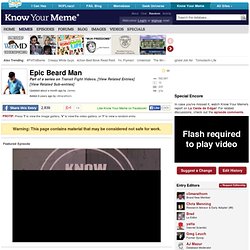 Origin On February 16th, 2010, Iyanna Washington, a college student from Oakland, CA (YouTube user “iyannaw08”) uploaded a video titled “AC TRANSIT BUS FIGHT I AM A MOTHERFUCKER.” It featured footage she recorded of a 50 year old black man and a 67 year old white man wearing a T-shirt that reads “I AM A MOTHERFUCKER” having a heated argument fueled by racial ignorance resulting in a violent physical confrontation. The older white man in the video was identified as Thomas Bruso, a.k.a. After the black man’s nose is broken, he says “bring an ambulance” which has been misheard as both “bring M&M’s” and “bring Amber Lamps” due to a combination of his dialect and facial injury. 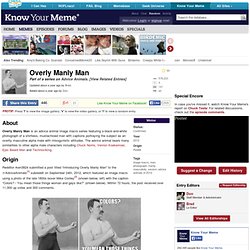 / You mean those things woman and gays like?” Technoviking. About Technoviking is the nickname given to a musclebound man dancing in a video shot during the annual techno music festival Fuckparade in July 2000. 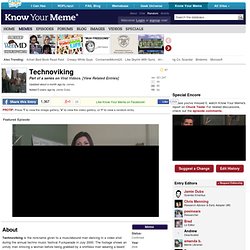 The footage shows an unruly man shoving a woman before being grabbed by a shirtless man wearing a beard and a Thor’s hammer pendant who pushes him away. Since being uploaded to YouTube in 2006, the video has gained tens of millions of views, as well as spawning hundreds of parodies and remixes. Origin The original clip “Kneecam No. 1” was produced by German visual artist Matthias Fritsch at the annual street techno festival “Fuck Parade” in Berlin, Germany on July 8th, 2000. Spread Throughout September 2007, the video quickly spread across other video-sharing sites and internet humor blogs including Break, eBaumsworld] and Digg] among others.

On October 18th, Cracked posted an article about the Internet sensation surrounding the mysterious fun-loving Techno Viking. Unresolved Identity Notable Examples Derivatives Controversies Lawsuit. Vernon Koekemoer. About Vernon Koekemoer is the nickname given to Cassie Booyse, a South African bodybuilding enthusiast who became an internet celebrity in 2008 after a photograph of him standing alone at a rave party in Boskburg, South Africa began circulating on the web. 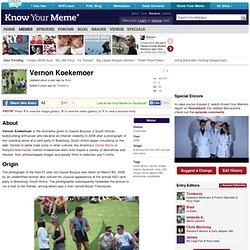 Similar to alpha male icons in other cultures like America’s Chuck Norris or Kenya’s Makmende, Vernon Koekemoer went onto inspire a variety of derivatives and tributes, from photoshopped images and parody films to websites and T-shirts. Origin The photograph of the then-51 year old Cassie Booyse was taken on March 8th, 2008, by an unidentified woman who noticed his unusual appearance at the annual H2O rave party in Boskburg, South Africa. The photographer subsequently forwarded the picture to via e-mail to her friends, among whom was a man named Bryan Theunissen. Spread On March 13th, 2008, South African blog RadioConstruction published a blog post titled “Who the Fuck is Vernon Koekemoer Anyway?” Identity Revealed Notable Examples Images.