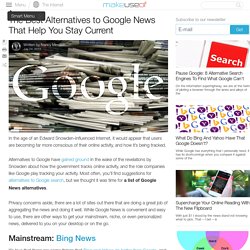 Alternatives to Google have gained ground in the wake of the revelations by Snowden about how the government tracks online activity, and the role companies like Google play tracking your activity. Most often, you’ll find suggestions for alternatives to Google search, but we thought it was time for a list of Google News alternatives. Privacy concerns aside, there are a lot of sites out there that are doing a great job of aggregating the news and doing it well. While Google News is convenient and easy to use, there are other ways to get your mainstream, niche, or even personalized news, delivered to you on your desktop or on the go. We’ve added a few new improvements to Docs, Sheets and Slides Android apps. In… ​15+ Awesome Google+ Tricks You Might Not Know About. Launch the Google+ Photos App in Chrome. Initially launched just for the Chromebook Pixel, the Google+ Photos packaged app also worked on other Chromebooks. 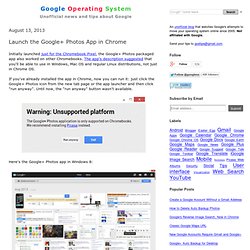 The app's description suggested that you'll be able to use in Windows, Mac OS and regular Linux distributions, not just in Chrome OS. If you've already installed the app in Chrome, now you can run it: just click the Google+ Photos icon from the new tab page or the app launcher and then click "run anyway". Until now, the "run anyway" button wasn't available.

Here's the Google+ Photos app in Windows 8: Unfortunately, the app's page from the Chrome Web Store only lets you install the app in Chrome OS, at least officially. How to install the app in Chrome? { Thanks, Andrea Leardini, Tim Nguyen and Stef van der Woerdt. } Street View is coming to Indonesia, as Google partners with the country's tourism ministry. Google has announced that it is bringing Street View to Indonesia in what will be its biggest project in Asia to date. 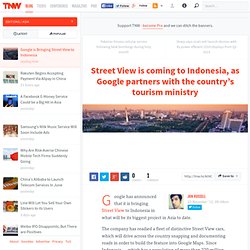 The company has readied a fleet of distinctive Street View cars, which will drive across the country snapping and documenting roads in order to build the feature into Google Maps. Since Indonesia — which has a population of more than 220 million — is a large country that consists of many islands, it will take a “few years” before it is completed, as Google explains. “This activity represents a long-term investment with the long-term objective of capturing imagery across Indonesia over the next few years. Handy New Ways to Organize File in Google Drive. For years now almost all of my documents have been created and stored in Google Docs and now Google Drive. 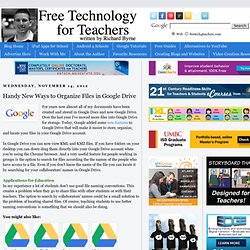 And a very useful feature for people working in groups is the option to search for files according the the names of the people who have access to a file. Applications for Education In my experience a lot of students don't use good file naming conventions. 404 Not Found. Drive. Crosspost images to Google+, Twitter and Facebook with MobyPicture. There are currently a few solutions available for cross-posting status updates to Google+, Twitter and Facebook including Start Google+ and Extended Share. 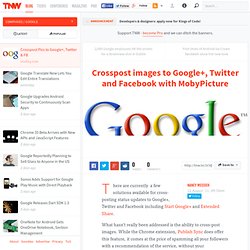 What hasn’t really been addressed is the ability to cross-post images. While the Chrome extension, Publish Sync does offer this feature, it comes at the price of spamming all your followers with a recommendation of the service, without your permission. If you really want to cross-post images to the three social networks, MobyPictures has an alternative solution, which anyone can use regardless of their browser of choice. Plus Weekly. Google Plus Games Has Arrived. The official Google Blog has announced the arrival of games today for Google+. A games button (seen below) should start appearing at the top of your stream over the next few weeks, which will give you access to the Games feature. 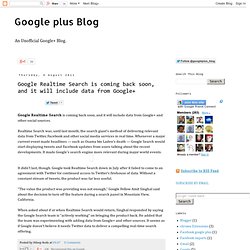 Realtime Search was, until last month, the search giant’s method of delivering relevant data from Twitter, Facebook and other social media services in real time. Whenever a major current event made headlines — such as Osama bin Laden’s death — Google Search would start displaying tweets and Facebook updates from users talking about the recent developments.