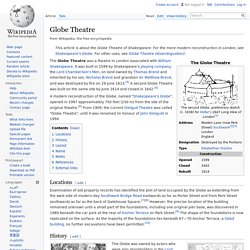 It was built in 1599 by Shakespeare's playing company, the Lord Chamberlain's Men, on land owned by Thomas Brend and inherited by his son, Nicholas Brend and grandson Sir Matthew Brend, and was destroyed by fire on 29 June 1613.[4] A second Globe Theatre was built on the same site by June 1614 and closed in 1642.[5] A modern reconstruction of the Globe, named "Shakespeare's Globe", opened in 1997 approximately 750 feet (230 m) from the site of the original theatre.[6] From 1909, the current Gielgud Theatre was called "Globe Theatre", until it was renamed (in honour of John Gielgud) in 1994. Locations[edit] History[edit] Second Globe Theatre, detail from Hollar's View of London, 1647. The Globe Theatre is shown at the bottom centre of this London street map[12] Position on modern street plan Site of the Globe Theatre, from Park Street; the dark line in the centre marks the foundation line.

Layout[edit] Shakespeare's Theatre - Essential Information on Shakespeare's Globe Theatre, Blackfriars theater. Quote in Context Thou seest we are not all alone unhappy, This wide and universal theatre Presents more woeful pageants than the scene Wherein we play in. 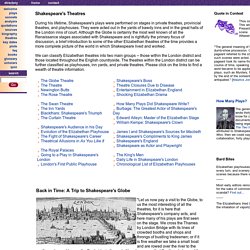 (As You Like It, 2.7.138) "The general meaning of this word is simply a kind of dumb-show procession. One of the earliest meanings of pageant referred to the stage, platform or scaffold on which such scenes were acted. It is a point of contention whether the pageant took its name from the structure or vice versa. Shakespeare in American Communities. Shakespeare lived during a remarkable period of English history, a time of relative political stability that followed and preceded eras of extensive upheaval. 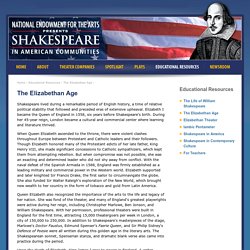 Elizabeth I became the Queen of England in 1558, six years before Shakespeare's birth. During her 45-year reign, London became a cultural and commercial center where learning and literature thrived. When Queen Elizabeth ascended to the throne, there were violent clashes throughout Europe between Protestant and Catholic leaders and their followers. Though Elizabeth honored many of the Protestant edicts of her late father, King Henry VIII, she made significant concessions to Catholic sympathizers, which kept them from attempting rebellion. But when compromise was not possible, she was an exacting and determined leader who did not shy away from conflict. Queen Elizabeth also recognized the importance of the arts to the life and legacy of her nation.

Upon the death of Elizabeth, King James I rose to power in England. Shakespeare's World. Life in Shakespeare's Time. Fact Sheets downloads. 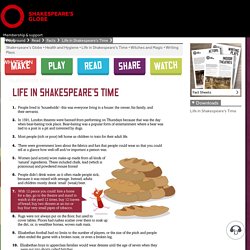 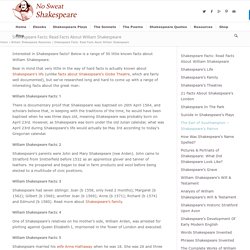 BBC History - William Shakespeare. William Shakespeare. William Shakespeare (/ˈʃeɪkspɪər/;[1] 26 April 1564 (baptised) – 23 April 1616)[nb 1] was an English poet, playwright, and actor, widely regarded as the greatest writer in the English language and the world's pre-eminent dramatist.[2] He is often called England's national poet and the "Bard of Avon".[3][nb 2] His extant works, including some collaborations, consist of about 38 plays,[nb 3] 154 sonnets, two long narrative poems, and a few other verses, the authorship of some of which is uncertain. 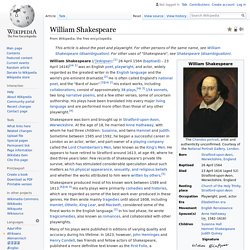 His plays have been translated into every major living language and are performed more often than those of any other playwright.[4] Shakespeare produced most of his known work between 1589 and 1613.[6][nb 4] His early plays were mainly comedies and histories and these works remain regarded as some of the best work produced in these genres. Many of his plays were published in editions of varying quality and accuracy during his lifetime. Life Early life.