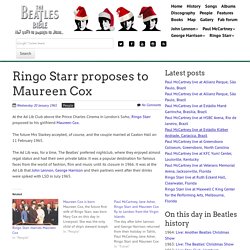 The future Mrs Starkey accepted, of course, and the couple married at Caxton Hall on 11 February 1965. The Ad Lib was, for a time, The Beatles' preferred nightclub, where they enjoyed almost regal status and had their own private table. It was a popular destination for famous faces from the world of fashion, film and music until its closure in 1966. It was at the Ad Lib that John Lennon, George Harrison and their partners went after their drinks were spiked with LSD in July 1965. Related Ringo Starr marries Maureen Cox Twenty-two days after he proposed to her in the Ad Lib Club, London, Ringo Starr married Maureen Cox at the city's Caxton Hall Register Office. 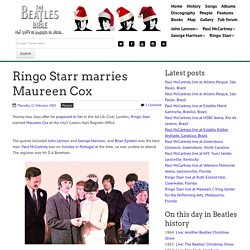 The guests included John Lennon and George Harrison, and Brian Epstein was the best man. Paul McCartney was on holiday in Portugal at the time, so was unable to attend. The registrar was Mr D A Boreham. February 23rd, 1965 : The Beatles begin filming Help! in the Bahamas. Although today was intended as a rest day following their trip from London to New Providence Island in the Bahamas, The Beatles began filming their second feature film on this day. 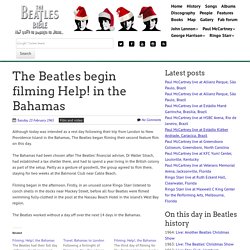 The Bahamas had been chosen after The Beatles' financial adviser, Dr Walter Strach, had established a tax shelter there, and had to spend a year living in the British colony as part of the setup. Partly as a gesture of goodwill, the group agreed to film there, staying for two weeks at the Balmoral Club near Cable Beach. June 11th, 1965 : The Beatles to be awarded MBEs. Brian Epstein requested that Paul McCartney and Jane Asher return from their Portuguese holiday a day early, so all The Beatles could be in Britain on the day it was announced that they would be awarded the Member of the Order of the British Empire. 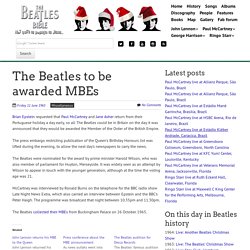 The press embargo restricting publication of the Queen's Birthday Honours list was lifted during the evening, to allow the next day's newspapers to carry the news. The Beatles were nominated for the award by prime minister Harold Wilson, who was also member of parliament for Huyton, Merseyside. It was widely seen as an attempt by Wilson to appear in touch with the younger generation, although at the time the voting age was 21. McCartney was interviewed by Ronald Burns on the telephone for the BBC radio show Late Night News Extra, which also carried an interview between Epstein and the BBC's Peter Haigh. The programme was broadcast that night between 10.35pm and 11.30pm. June 12th, 1965 : Press conference about the MBE announcement.

John Lennon: I set the alarm for eight o'clock and then I just laid there. 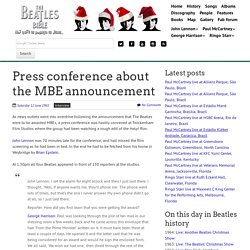 I thought, 'Well, if anyone wants me, they'll phone me.' The phone went lots of times, but that's the one I never answer. My own phone didn't go at all, so I just laid there. Reporter: How did you first learn that you were getting the award? George Harrison: Paul was looking through the pile of fan mail in our dressing room a few weeks back and he came across this envelope that had 'From the Prime Minister' written on it. Paul McCartney: We thought that MBE stood for Mr Brian Epstein, because we always sign his contracts, because he's our manager. Reporter: Why have you been honoured this way? July 19th, 1965 : US single release: Help! The Beatles' 10th Capitol Records single was released just before the world premiere of their second feature film. 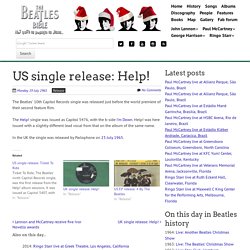 The Help! Single was issued as Capitol 5476, with the b-side I'm Down. Help! Was here issued with a slightly different lead vocal from that on the album of the same name. July 29th, 1965 : World première of Help! The Beatles' second film Help! 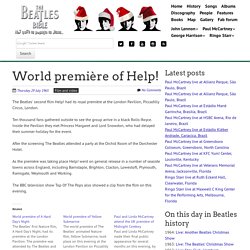 Had its royal première at the London Pavilion, Piccadilly Circus, London. Ten thousand fans gathered outside to see the group arrive in a black Rolls-Royce. Inside the Pavilion they met Princess Margaret and Lord Snowdon, who had delayed their summer holiday for the event. August 13th, 1965 : US album release: Help! The Beatles' eighth US album released by Capitol Records, Help! 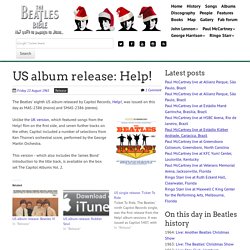 , was issued on this day as MAS-2386 (mono) and SMAS-2386 (stereo). August 15th, 1965 : Live: Shea Stadium, New York. The Beatles' record-breaking first performance at New York's Shea Stadium was watched by 55,600 fans, and marked the beginning of the group's second full US concert tour. 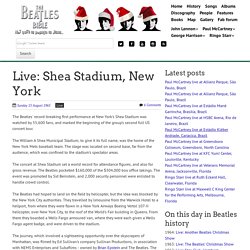 The William A Shea Municipal Stadium, to give it its full name, was the home of the New York Mets baseball team. The stage was located on second base, far from the audience, which was confined to the stadium's spectator areas. The concert at Shea Stadium set a world record for attendance figures, and also for gross revenue. August 27th, 1965 : The Beatles meet Elvis Presley. The meeting of two great musical acts of the 20th century took place on this day: The Beatles and Elvis Presley. 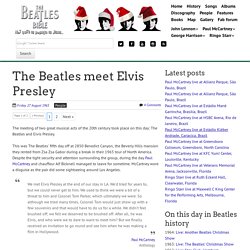 This was The Beatles' fifth day off at 2850 Benedict Canyon, the Beverly Hills mansion they rented from Zsa Zsa Gabor during a break in their 1965 tour of North America. Despite the tight security and attention surrounding the group, during the day Paul McCartney and chauffeur Alf Bicknell managed to leave for sometime. McCartney wore a disguise as the pair did some sightseeing around Los Angeles.

We met Elvis Presley at the end of our stay in LA. We'd tried for years to, but we could never get to him. It took place at Presley's mansion at 565 Perugia Way, Bel Air, Los Angeles. The first fundamental ground rules to be set were: no press to be invited, no pictures to be taken, no recordings to be made and no leaking of our plans in advance.It was shortly before 10pm when we drove over. Tony Barrow. September 25th, 1965 : The Beatles’ cartoon series begins in the United States.

A cartoon series featuring The Beatles began on this day in the United States. Simply titled The Beatles, it ran until 1969 on the ABC network, with 39 episodes produced over three seasons. The series was shown on Saturday mornings at 10.30am until 1968, when it was moved to Sunday mornings. October 26th, 1965 : The Beatles collect their MBEs. 26 October 1965 was an important day for The Beatles: an appointment at Buckingham Palace to collect their MBEs from the Queen. Although we didn't believe in the Royal Family, you can't help being impressed when you're in the palace, when you know you're standing in front of the Queen.

It was like in a dream. It was beautiful. December 3rd, 1965 : UK album release: Rubber Soul. The Beatles' sixth UK album Rubber Soul was released on this day as Parlophone PMC 1267 (mono) and PCS 3075 (stereo). Rubber Soul had advance orders of more than 500,000. It entered the album charts on 11 December 1965, and spent nine weeks at the top from 25 December. In all it remained in the charts for 42 consecutive weeks. December 26th, 1965 : Paul McCartney has a moped accident in Liverpool. I had an accident when I came off a moped in Wirral, near Liverpool. I had a very good friend who lived in London called Tara Browne, a Guinness heir - a nice Irish guy, very sensitive bloke. I'd see him from time to time, and enjoyed being around him. He came up to visit me in Liverpool once when I was there seeing my dad and brother. I had a couple of mopeds on hire, so we hit upon the bright idea of going to my cousin Bett's house.

We were riding along on the mopeds. There I was, chipped tooth and all. it came through my lip and split it.