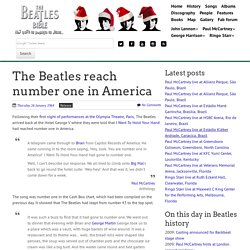 A telegram came through to Brian from Capitol Records of America. He came running in to the room saying, 'Hey, look. January 20th, 1964 : US album release: Meet The Beatles! The Beatles' first LP on Capitol Records was released while the group were in Paris, just three days after they were told I Want To Hold Your Hand had reached number one in America. 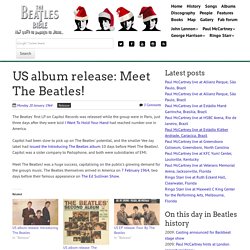 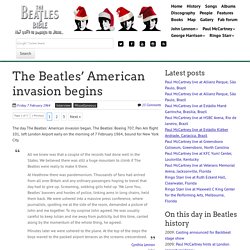 The Beatles' Boeing 707, Pan Am flight 101, left London Airport early on the morning of 7 February 1964, bound for New York City. All we knew was that a couple of the records had done well in the States. We believed there was still a huge mountain to climb if The Beatles were really to make it there.At Heathrow there was pandemonium. Thousands of fans had arrived from all over Britain and any ordinary passengers hoping to travel that day had to give up.

Screaming, sobbing girls held up 'We Love You, Beatles' banners and hordes of police, linking arms in long chains, held them back. February 9th, 1964 : The Beatles’ first Ed Sullivan Show. This was the date of The Beatles' record-breaking first live appearance on the Ed Sullivan Show, at Studio 50 in New York City. 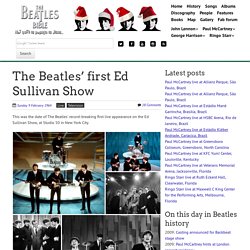 Seventy-three million people were reported to have watched the first show. It is still supposed to be one of the largest viewing audiences ever in the States.It was very important. We came out of nowhere with funny hair, looking like marionettes or something. That was very influential. February 11th, 1964 : LiveWashington Coliseum, Washington, DC. The Beatles traveled from New York to Washington, DC early on this day by rail, as an East Coast snowstorm had caused all flights to be cancelled. 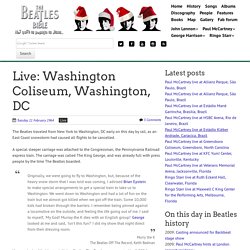 A special sleeper carriage was attached to the Congressman, the Pennsylvania Railroad express train. The carriage was called The King George, and was already full with press people by the time The Beatles boarded. Originally, we were going to fly to Washington, but, because of the heavy snow storm that I was told was coming, I advised Brian Epstein to make special arrangements to get a special train to take us to Washington. March 2nd, 1964 : The Beatles begin filming A Hard Day’s Night. On Monday 2 March 1964 The Beatles joined Equity, the actors' union, only minutes before they began shooting their first film, the as-yet untitled A Hard Day's Night.

Their union memberships were proposed and seconded by Wilfrid Brambell and Norman Rossington, their main co-stars in the film. All gathered at London's Paddington Station, where their train left at 8.30am from platform five. However, no filming took place at the station itself. The specially-hired train was destined for Minehead and back, where for the next three days scenes were filmed in the suitably cramped setting. There was a dining car for The Beatles to eat in, yet during their designated 40-minute food break they preferred simply to sit still instead of rolling about with the train's movements. The Beatles' dialogue was recorded using microphones hidden inside their shirts, but numerous retakes were required due to sound problems. 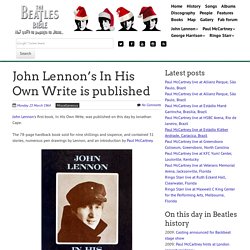 The 78-page hardback book sold for nine shillings and sixpence, and contained 31 stories, numerous pen drawings by Lennon, and an introduction by Paul McCartney. About the AwfulI was bored on the 9th of Octover 1940 when, I believe, the Nasties were still booming us led by Madalf Heatlump (Who had only one). Anyway, they didn't get me. I attended to varicous schools in Liddypol. And still didn't pass-much to my Aunties supplies. To promote the book, Lennon appeared on the live BBC TV programme Tonight between 7pm and 7.35pm. April 4th, 1964 : The Beatles occupy the Billboard Hot 100 top five. In an achievement unlikely to ever be equalled, for the week of 4 April 1964 The Beatles occupied the top five positions of the Billboard Hot 100 chart. 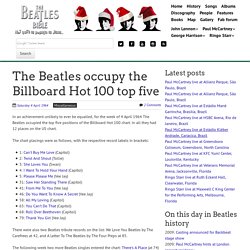 In all they had 12 places on the US chart. The chart placings were as follows, with the respective record labels in brackets: There were also two Beatles tribute records on the list: We Love You Beatles by The Carefrees at 42, and A Letter To The Beatles by The Four Preps at 85. The following week two more Beatles singles entered the chart: There's A Place (at 74) and Love Me Do (81). Related US single release: Love Me Do. April 10th, 1964 : US album release: The Beatles’ Second Album. The follow-up to Meet The Beatles! 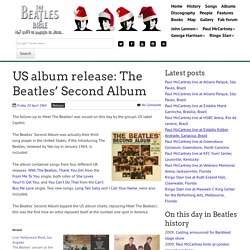 Was issued on this day by the group's US label Capitol. The Beatles' Second Album was actually their third long player in the United States, if the Introducing The Beatles, released by Vee-Jay in January 1964, is included. The album contained songs from four different UK releases: With The Beatles, Thank You Girl from the From Me To You single, both sides of She Loves You/I'll Get You, and You Can't Do That from the Can't Buy Me Love single. June 3rd, 1964 : Ringo Starr is taken ill before The Beatles’ world tour. In the morning Ringo Starr collapsed with tonsillitis and pharyngitis during a photo session for the Saturday Evening Post newspaper in Barnes, north London. 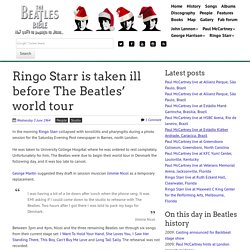 He was taken to University College Hospital where he was ordered to rest completely. Unfortunately for him, The Beatles were due to begin their world tour in Denmark the following day, and it was too late to cancel. George Martin suggested they draft in session musician Jimmie Nicol as a temporary replacement. I was having a bit of a lie down after lunch when the phone rang. It was EMI asking if I could come down to the studio to rehearse with The Beatles. Jimmie Nicol Between 3pm and 4pm, Nicol and the three remaining Beatles ran through six songs from their current stage set: I Want To Hold Your Hand, She Loves You, I Saw Her Standing There, This Boy, Can't Buy Me Love and Long Tall Sally.

Related. June 4th, 1964 : The Beatles’ world tour begins in Copenhagen, Denmark. For all the concerts they played between 1963 and 1966, The Beatles only undertook one world tour. It began on this day in Copenhagen, Denmark, and continued in the Netherlands, Hong Kong, Australia and New Zealand. In the morning The Beatles were driven by their chauffeur, Bill Corbett, to London Airport where they were taken to their aeroplane ahead of the other passengers. There they signed autographs for the captain and crew. More than 6,000 fans awaited their arrival in Copenhagen, and Danish police had to quell crowds of around 10,000 who brought the city centre to a standstill. As they checked in to the Royal Hotel fans attempted to storm the doors.

Ringo Starr remained in London, having been hospitalised with tonsillitis and pharyngitis the previous day. June 14th, 1964 : Ringo rejoins The Beatles in Australia. After almost two weeks apart from the group due to his tonsillitis and pharyngitis, Ringo Starr finally rejoined The Beatles in Melbourne, Australia. After holding a press conference at Sydney Airport with manager Brian Epstein, Starr flew to Essendon Airport in Melbourne.

There were large crowds already waiting, as the other three Beatles were due to arrive five hours later. I hated to leave the other three. I followed them out to Australia and there were people at the airport, but I was on my own and just automatically I looked round for the others. I couldn't stand it. Ringo Starr Anthology Three thousand fans were at Melbourne's Southern Cross Hotel when Starr and Epstein arrived. Meanwhile, the other three Beatles left their Adelaide hotel at 12.15 and flew to Melbourne on a chartered Ansett ANA Fokker Friendship. At the hotel, meanwhile, there were so many people hoping to catch a glimpse of them that army and navy troops were called in. Related Sunday 14 June 1964 In "Interview"

July 6th, 1964 : World première of A Hard Day’s Night. The Beatles' first feature film, A Hard Day's Night, had its première at the London Pavilion. The première was attended by The Beatles and their wives and girlfriends, and a host of important guests including Princess Margaret and Lord Snowdon. Nearby Piccadilly Circus was closed to traffic as 12,000 fans jostled for a glimpse of the group. I remember Piccadilly being completely filled.

We thought we would just show up in our limo, but it couldn't get through for all the people. It wasn't frightening - we never seemed to get worried by crowds. July 10th, 1964 : UK single and album release: A Hard Day’s Night. Both the A Hard Day's Night single and album were released on this day in the United Kingdom. The single was The Beatles' first not to have a pronoun in its title. Its b-side was Things We Said Today, and the single had the catalogue number Parlophone R 5160. It entered the UK charts on 18 July, and a week later knocked The Rolling Stones' It's All Over Now from the number one spot. It remained there for three weeks, and spent a further nine weeks in the charts. The album was issued as PMC 1230 (mono) and PCS 3058 (stereo). The A Hard Day's Night album had advance orders of over 250,000.

July 20th, 1964 : US album release: Something New. The Beatles' fifth US album - their third on Capitol Records - contained eight songs originally released on the UK album A Hard Day's Night, plus a selection of other recordings. August 23rd, 1964 : Interview: John Lennon and Ringo Starr in Los Angeles. Q: You mentioned something about the word 'cheeky'. What's it all about? John: Well I mean, you know, I thought cheeky was universal. August 28th, 1964 : Bob Dylan turns The Beatles on to cannabis. December 15th, 1964 : US album release: Beatles ’65.

The Beatles' fifth album on Capitol Records included the majority of songs from Beatles For Sale, and added I'll Be Back, She's A Woman and I Feel Fine. Of the Beatles For Sale songs, it left out Eight Days A Week, Words Of Love, Every Little Thing, I Don't Want To Spoil The Party, What You're Doing and Kansas City/Hey-Hey-Hey-Hey!. Those songs were included on the June 1965 album Beatles VI. Beatles '65 was released as Capitol T-2228 (mono) and Capitol ST-2228 (stereo).