Beatles 1962. January 24th, 1962 : The Beatles sign a contract to make Epstein their manager. This is the first signed contract between The Beatles and Brian Epstein Brian Epstein claims he first became aware of The Beatles when a customer came into his record store asking for a copy of the My Bonnie single that the band had recorded with Tony Sheridan. 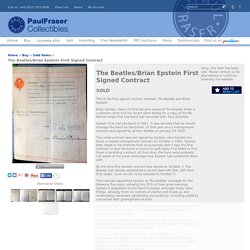 Epstein first met the band in 1961. It was decided that he should manage the band on December 10 that year and a management contract was signed by all four Beatles on January 24 1962. This initial contract was not signed by Epstein, who handed the band a revised management contract on October 1 1962. Epstein later noted in his memoirs that he purposely didn’t sign the first contract to give the band a chance to walk away if he failed to find them a recording contract. April 10th, 1962 : Stuart Sutcliffe dies. Stuart Sutcliffe, the brilliant young painter who was a bass guitarist with The Beatles in their early period, died on this day of a brain haemorrhage. 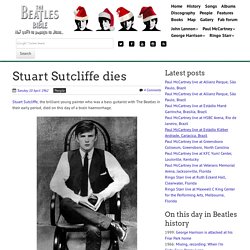 He had been suffering from increasingly severe headaches and blackouts since settling in Hamburg with Astrid Kirchherr, his German fiancée. The cause of these remained uncertain, though Sutcliffe believed they were a consequence of overwork. In February he had collapsed during an art school class, and dropped out of education. The Kirchherr family suspected a brain tumour, and sent him for x-rays, although nothing amiss was found. Two doctors subsequently saw Sutcliffe but they too could find nothing wrong. By March 1962 the headaches had grown in frequency, escalating at times to violent fits, and Sutcliffe often suffered temporary blindness. On 10 April Astrid Kirchherr received a call from her mother while working in her photography studio. Kirchherr rushed home to accompany him in the ambulance. Related Wednesday 15 March 1961. 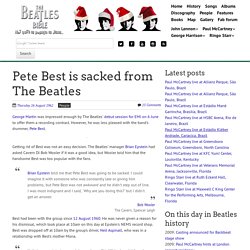 However, he was less pleased with the band's drummer, Pete Best. Getting rid of Best was not an easy decision. The Beatles' manager Brian Epstein had asked Cavern DJ Bob Wooler if it was a good idea, but Wooler told him that the handsome Best was too popular with the fans. Brian Epstein told me that Pete Best was going to be sacked. I could imagine it with someone who was constantly late or giving him problems, but Pete Best was not awkward and he didn't step out of line.

Best had been with the group since 12 August 1960. Neil drove me into town and dropped me off in Whitechapel. Pete Best Beatle! Best and Aspinall repaired to the Grapes pub on Mathew Street to take in the shocking news. 'All I want to do is try to get my thoughts together,' I told him. John Lennon later said of the dismissal, "We were cowards.

August 18th, 1962 : Ringo Starr’s first official show as a Beatle. Following the sacking of Pete Best, The Beatles were quick to recruit their new drummer. 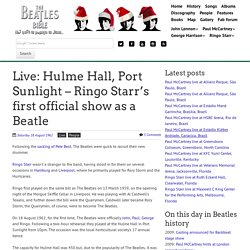 Ringo Starr wasn't a stranger to the band, having stood in for them on several occasions in Hamburg and Liverpool, where he primarily played for Rory Storm and the Hurricanes. August 22nd, 1962 : The Beatles’ first television appearance. The Beatles' 126th lunchtime performance at the Cavern Club on Mathew Street, Liverpool took place on this day. 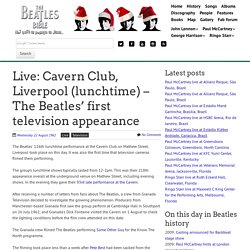 It was also the first time that television cameras filmed them performing. The group's lunchtime shows typically lasted from 12-2pm. This was their 218th appearance overall at the underground venue on Mathew Street, including evening shows. In the evening they gave their 93rd late performance at the Cavern. After receiving a number of letters from fans about The Beatles, a crew from Granada Television decided to investigate the growing phenomenon. Brian Epstein was the best man, and George Harrison and Paul McCartney were also in attendance. Absent was John's aunt Mimi, who disapproved of the union, although Cynthia's half brother and his wife were there. As soon as the ceremony began, a pneumatic drill outside the building opposite drowned out all that was said; when the registrar asked for the groom to step forward, Harrison did, which only added to the farce. At Epstein's expense, they celebrated afterwards at Reece's restaurant in Clayton Square, eating a set menu of soup, chicken and trifle. Reece's was where John's parents Alf and Julia had celebrated their own wedding in 1938. September 11th, 1962 : Recording of PS I Love You, Love Me Do, Please Please Me. Studio Two, EMI Studios, Abbey Road Producer: Ron Richards Engineer: Norman Smith Following the session on 4 September, where The Beatles recorded How Do You Do It and Love Me Do, EMI hastily arranged for them to return to London for a third attempt to complete their debut single. George Martin was concerned with the quality of Ringo Starr's drumming on the original Love Me Do, and so arranged for an experienced session drummer, Andy White, to play on the session. White was paid a standard fee of £5 15s (£5.75). I had already heard of them because I was married to Lyn Cornell of the Vernons Girls, themselves a Liverpool group.

They could have been cold towards me but in fact they were very nice, and kidded about. October 5th, 1962 : Single Released : Love Me Do / P.S. I Love You. And so it came out, the fruits of two long recording sessions. 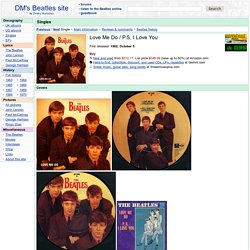 Ardent Beatles' fans will be aware that the content of the single changed in 1963. Copies pressed before then featured the 4 September version of Love Me Do , Ringo on drums. October 9th, 1962 : The Beatles promote Love Me Do in London. The Beatles' debut UK single, Love Me Do, had been issued on 5 October 1962. 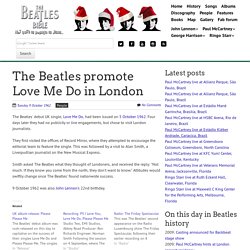 Four days later they had no publicity or live engagements, but chose to visit London journalists. They first visited the offices of Record Mirror, where they attempted to encourage the editorial team to feature the single. This was followed by a visit to Alan Smith, a Liverpudlian journalist on the New Musical Express. October 27th, 1962 : The Beatles’ first radio interview. Monty Lister: Well it's a very great pleasure for us this evening to say hello to an up-and-coming Merseyside group, The Beatles. 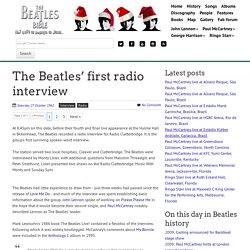 Now I know their names, and I'm going to try and put faces to them.