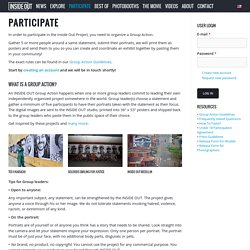 Gather 5 or more people around a same statement, submit their portraits, we will print them as posters and send them to you so you can create and coordinate an exhibit together by pasting them in your community! The exact rules can be found in our Group Action Guidelines. Start by creating an account and we will be in touch shortly!

Guus Hendrickx - Outlook Web App. Type the email address of the account you want to sign in with. 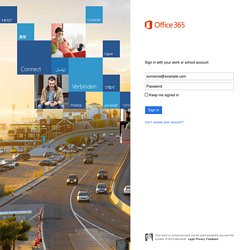 Please try again in a few minutes. Art That Changed the World: DK Publishing: 9781465414359: Amazon.com: Books. AI WEIWEI: NEVER SORRY, a film by Alison Klayman. Shocked by Paul McCarthy's butt plug? You obviously haven't seen his phallic Pinocchio. Anality is in the eye of the beholder. 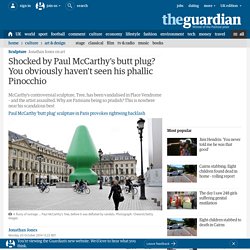 An inflatable sculpture by American artist Paul McCarthy has been vandalised – and the artist himself assaulted – after a flurry of outrage in Paris over a sculpture that is said to resemble a type of sex toy known, I am informed, as a butt plug. I feel old fashioned that I had to be told that. The work is called Tree, and if I didn’t know about the accusation that it looks like a sex toy, I would probably have taken the title at face value.

Well, perhaps not entirely. The chances of McCarthy erecting anything as innocent as a tree seem slight when you consider this surrealist’s oeuvre. McCarthy is the Chapman brothers’ estranged dad. This stuff really is in the mind. 2014: the year British art became irrelevant. Something faded to grey in British art in 2014. 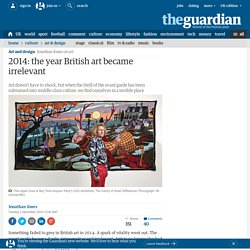 A spark of vitality went out. The avant garde became docile, introspective and irrelevant. Artists no longer shocked anyone, but instead elicited a po-faced respect, like the feeling of awe that men with white vans elicit in Ed Miliband. 'Riposte', Boris Taslitzky: Summary. Why a charcoal of police in Ferguson is the most important artwork of 2014. 2014 has produced horrific politics. 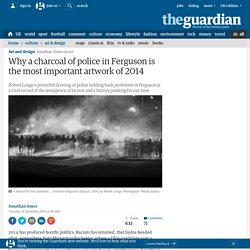 Racism has returned, that hydra-headed idiot, everywhere from Missouri to Rochester, where a Ukip candidate won a byelection after openly speculating about repatriating Europeans. It is not much by way of compensation to say the year also produced a mighty piece of political art. But it did. Robert Longo’s Untitled (Ferguson Police August 13, 2014) is a 10-ft wide charcoal drawing of a line of faceless cops, clad and helmeted in black, silhouetted against searchlights in a swirl of illuminated smoke. This is a brilliantly powerful drawing, based on photographs taken on the angry streets of Ferguson, Missouri, after 18-year-old Michael Brown was shot dead by a police officer there on 9 August. When an artist takes a photographic image and redraws, repaints or otherwise transforms it, that photograph is lifted out of the remorseless stream of information that bombards us and given heightened significance. George Grosz's dada drawings show how the first world war upended art. 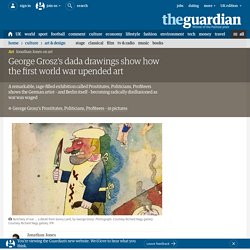 We will soon be hearing a lot about the first world war as we hit the centenary of its start: the folly that led a peaceful world to destruction, the devastating descent into the quagmire of the trenches, the horrors of gas and barbed wire. The impact on art is less likely to fill anniversary commemorations. A remarkable exhibition at the Richard Nagy gallery on Old Bond Street, London, George Grosz's Berlin: Prostitutes, Politicians, Profiteers, reveals how brutalising and yet horribly energising that artistic impact was.

Wounded veterans, maimed and disfigured, mingle with prostitutes, fat-cat capitalists, wicked old generals and decadent bohemians in Grosz's radically disillusioned art. Born Georg Ehrenfried Gross in 1893, he anglicised his name as a protest against German nationalism in the first world war, in which he briefly served. Duchamp's Fountain: The practical joke that launched an artistic revolution. Duchamp has been compared to Leonardo da Vinci, as a profound philosopher-artist. 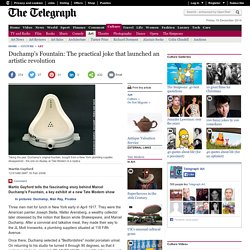 But there is also a comparison to be made with Buster Keaton, another handsome deadpan clown whom Duchamp somewhat resembled. He valued humour, telling a New York newspaper that, "People took modern art very seriously when it first reached America because they believed we took ourselves very seriously. A great deal of modern art is meant to be amusing. " The context for the purchase and naming of Fountain was a worthy exhibition by the Society of Independent Artists, formed on the model of the Parisian Salon des Indépendants.

It was to show works by anyone, subject to a fee of $1 for membership and $5 annual dues. His first move was to suggest that the works in the New York exhibition be hung alphabetically, with the first letter to be drawn out of a hat. This deadpan style of question was very much Duchamp's technique. "He looked at me and said, 'Do you? ' And what happened to the original?