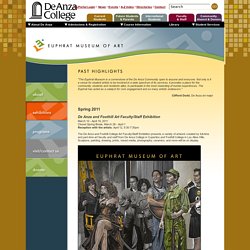 Not only is it a venue for student artists to be involved in a wide spectrum of its services, it provides a place for the community, students and residents alike, to participate in the most rewarding of human experiences. The Euphrat has acted as a catalyst for civic engagement and so many artistic endeavors. " Spring 2011 De Anza and Foothill Art Faculty/Staff Exhibition March 10 - April 19, 2011 Closed Spring Break, March 28 - April 1 Reception with the artists: April 12, 5:30-7:30pm The De Anza and Foothill College Art Faculty/Staff Exhibition presents a variety of artwork created by full-time and part-time art faculty and staff from De Anza College in Cupertino and Foothill College in Los Altos Hills. 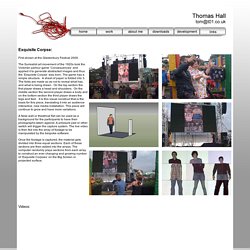 The Surrealist art movement of the 1920s took the Victorian parlour game ‘Consequences’ and applied it to generate abstracted images and thus the ‘Exquisite Corpse’ was born. The game has a simple structure. A sheet of paper is folded into 3. The folds are made so as not to reveal what has, and what is being drawn. A false wall or theatrical flat can be used as a background for the participants to have their photographs taken against. Once the footage is captured, the material gets divided into three equal sections. Thomas Hall - Exquisite Corpse. Surrealist Ceramics: Exquisite Cups by Chloe Lee Carson. I bet André Breton himself could not have foreseen the 'consequences' of inventing Exquisite Corpse: four score and seven years after he popularized the collective writing/drawing game, designer Chloe Lee Carson has resurrected the surrealist pastime as a collection of playful tableware. 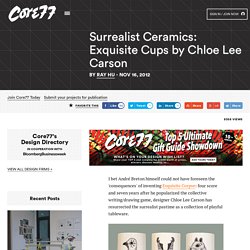 For her "Exquisite Cups," Carson came up with a total of nine characters—further refined by an illustrator—divided into three sets, which loosely adhere to the themes of "Folk," "Wild," and "City. " (The pun is less successful in French, as the game is known as cadavre exquis. C'est la vie.) In homage to the game, each cup "displays different body parts that stack up to form a complete image. Once stacked, they can be twisted to create amazing cross-breed creatures. 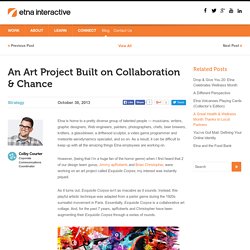 As a result, it can be difficult to keep up with all the amazing things Etna employees are working on. However, (being that I’m a huge fan of the horror genre) when I first heard that 2 of our design team gurus, Jimmy apRoberts and Brian Christopher, were working on an art project called Exquisite Corpse, my interest was instantly piqued. As it turns out, Exquisite Corpse isn’t as macabre as it sounds. Instead, this playful artistic technique was adapted from a parlor game during the 1920s surrealist movement in Paris. Essentially, Exquisite Corpse is a collaborative art collage. “This is a very interesting collaborative process in that we’re not necessarily working together,” said apRoberts.

Exquisite Corpse. Full View JA/BC Fine Art Prints If you like what you see, we have prints available in a variety of sizes. 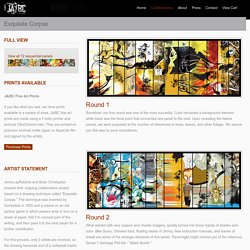 JA/BC fine art prints are made using a 7-color printer and archival UltraChrome inks. They are printed on premium archival matte paper or AquaLite film and signed by the artists. Purchase Prints Artist Statement Jimmy apRoberts and Brian Christopher present their ongoing collaborative project based on a drawing technique called "Exquisite Corpse.

" For this process, only 2 artists are involved, so the drawing becomes sort of a volleyball match. Exquisitely After the completion of Round 1, each artist took the final digital file and used it as a starting point to further the collaboration and see how similar or different the next steps would be. Exquisitely Brain'd Exquisitely Jimmy'd Round 1 Somehow, our first round was one of the most succesful. Round 2.