Guggenheim. Cezanne, Composition of Still Life with Apples and Oranges. This is part of an essay done for an art appreciation course in May 2005. 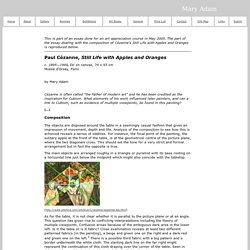 The part of the essay dealing with the composition of Cézanne's Still Life with Apples and Oranges is reproduced below. Paul Cézanne, Still Life with Apples and Oranges c. 1895—1900, Oil on canvas, 74 x 93 cm Musée d'Orsay, Paris by Mary Adam Cézanne is often called “the father of modern art” and he has been credited as the inspiration for Cubism. What elements of his work influenced later painters, and can a link to Cubism, such as evidence of multiple viewpoints, be found in this painting? [...] Composition The objects are disposed around the table in a seemingly casual fashion that gives an impression of movement, depth and life. . ( As for the table, it is not clear whether it is parallel to the picture plane or at an angle. Project ART-A-DAY: Lesson: Cube Yo' Face! (Aka Picasso Portraits) "I don't get why that is art! 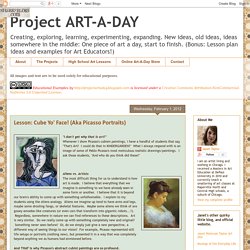 " Whenever I show Picasso's cubism paintings, I have a handful of students that say, "That's Art? I could do that in KINDERGARDEN! " What I always respond with is an image of some of Pablo Picasso's most meticulous realistic drawings/paintings. I ask those students, "And who do you think did these? " Aliens vs. The most difficult thing for us to understand is how art is made. And THAT is why Picasso's abstract cubist paintings are so profound.

So why not do what we do with aliens and IMITATE? Ok, let's not call it imitate, but rather... borrow with intents of homage! Often times ART 1 students are very intimidated by the idea of drawing. You might be wondering why in the world I would choose him as our inspiration. Reason 1: This connected with my Pop Art discussion/presentation a few months back during our color unit (I made a worksheet called "I CAN! Cubism - the first abstract style of modern art.

The Influence of Cézanne PAUL CÉZANNE (1839-1906) 'Bibemus Quarry', 1895 (oil on canvas) Cézanne was not primarily interested in creating an illusion of depth in his painting and he abandoned the tradition of perspective drawing. 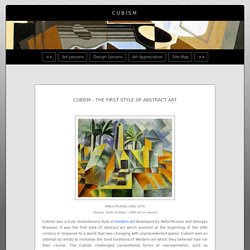 Perspective, which had been used since the Early Renaissance, was a geometric formula that solved the problem of how to draw three-dimensional objects on a two dimensional surface. Cézanne felt that the illusionism of perspective denied the fact that a painting is a flat two-dimensional object. He liked to flatten the space in his paintings to place more emphasis on their surface - to stress the difference between a painting and reality. The Cubist Vision GEORGES BRAQUE (1882-1963) 'Viaduct at L'Estaque', 1908 (oil on canvas) The limitations of perspective were also seen as an obstacle to progress by the Cubists. When you look at an object your eye scans it, stopping to register on a certain detail before moving on to the next point of interest and so on.

Cubism. Timeline: Picasso and Cubism An early 20th-century school of painting and sculpture in which the subject matter is portrayed by geometric forms without realistic detail, stressing abstract form at the expense of other pictorial elements largely by use of intersecting often transparent cubes and cones. 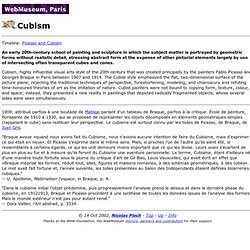 Cubism, highly influential visual arts style of the 20th century that was created principally by the painters Pablo Picasso and Georges Braque in Paris between 1907 and 1914. The Cubist style emphasized the flat, two-dimensional surface of the picture plane, rejecting the traditional techniques of perspective, foreshortening, modeling, and chiaroscuro and refuting time-honoured theories of art as the imitation of nature. Cubist painters were not bound to copying form, texture, colour, and space; instead, they presented a new reality in paintings that depicted radically fragmented objects, whose several sides were seen simultaneously.

Cubism (art. Cubism, highly influential visual arts style of the 20th century that was created principally by the artists Pablo Picasso and Georges Braque in Paris between 1907 and 1914. 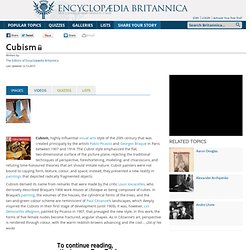 The Cubist style emphasized the flat, two-dimensional surface of the picture plane, rejecting the traditional techniques of perspective, foreshortening, modeling, and chiaroscuro, and refuting time-honoured theories that art should imitate nature. Cubist painters were not bound to copying form, texture, colour, and space; instead, they presented a new reality in paintings that depicted radically fragmented objects. Cubism derived its name from remarks that were made by the critic Louis Vauxcelles, who derisively described Braque’s 1908 work Houses at L’Estaque as being composed of cubes. Parade Case Study.pdf. Cubisms.pdf.