AWARE/OWARE Video Game – Art Works for Change. There are few electronic or online games that address the empowerment of girls. 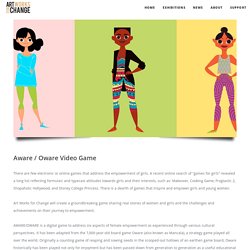 A recent online search of “games for girls” revealed a long list reflecting formulaic and typecast attitudes towards girls and their interests, such as: Makeover, Cooking Game, Frogtastic 2, Shopaholic Hollywood, and Disney College Princess. There is a dearth of games that inspire and empower girls and young women. Art Works for Change will create a groundbreaking game sharing real stories of women and girls and the challenges and achievements on their journey to empowerment. AWARE/OWARE is a digital game to address six aspects of female empowerment as experienced through various cultural perspectives. It has been adapted from the 7,000-year-old board game Oware (also known as Mancala), a strategy game played all over the world. In AWARE/OWARE, players reap stories, as told by avatars representing different countries and cultures. Art Works for Change.

The incredible power of art to change the world. “Art can go through where other things can’t. 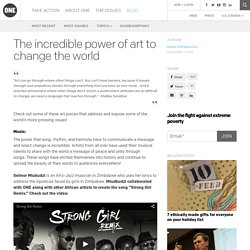 You can’t have barriers, because it breaks through your prejudices, breaks through everything that you have as your mask…And it reaches somewhere where other things don’t. Can Art Create World Change? 3 Artists at Davos. Olafur Eliasson showing off one of his first Little Sun products that will provide solar-powered lanterns to the poor. 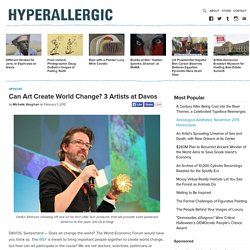 (via DLD blog) Can Art Change the World? As Director of Digital Learning, I might just have the best job in the world. 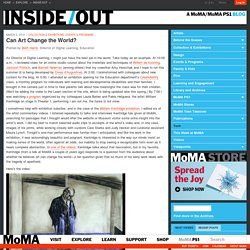 Take today as an example. At 10:00 a.m., I reviewed video for an online studio course about the materials and techniques of Willem de Kooning, Jackson Pollock, and Barnett Newman (among others) that my coworker Amy Horschak and I hope to run this summer (it is being developed by Corey d’Augustine). At 2:00, I brainstormed with colleagues about new content for the blog. At 5:00, I attended an exhibition opening for the Education department’s CreateAbility class, a monthly program for individuals with learning and developmental disabilities and their families.

I brought in the camera just in time to hear parents talk about how meaningful the class was for their children. I sometimes help with exhibition subsites, and in the case of the William Kentridge exhibition, I edited six of the artist commentary videos. Here’s the video: My job is pretty awesome, isn’t it? Can Art Change the World? 8 Stunning Works of Art That Are Here to Change the World. Art is all around us. 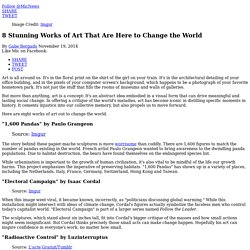 Arts & Culture Archives. Crystal Awards “I am enough of an artist to draw freely upon my imagination. 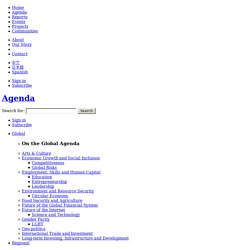 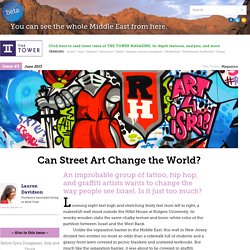 Unlike the separation barrier in the Middle East, this wall in New Jersey divided two entities no more at-odds than a sidewalk full of students and a grassy front lawn covered in picnic blankets and scattered textbooks. But much like the separation barrier, it was about to be covered in graffiti. Shaken into life, a spray can rattled. It emitted a soft hiss as, held aloft in an artist’s right hand, its first puff of color splashed onto the blank wall. Can Art Change The World? : Art & Politics in Australia. Speakers: Dr Jeff McMullen AM is a journalist, author and film-maker for almost five decades, Jeff McMullen has been a foreign correspondent for Australian Broadcasting Corporation, reporter for Four Corners and Sixty Minutes, interviewer and anchor of the 33 part issue series on ABC Television, Difference of Opinion and host of televised forums on the National Indigenous Television Network. 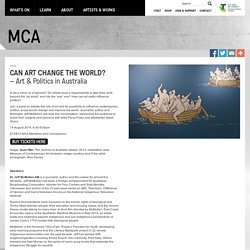 Recent documentaries have focussed on the human rights of Aboriginal and Torres Strait Islander people, their education and housing needs, and the chronic illness cluster taking so many lives. A short film directed by McMullen, East Coast Encounter, opens at the Australian Maritime Museum in May 2014, as artists, poets and historians explore Indigenous and non-Indigenous perspectives of James Cook’s 1770 contact with Aboriginal people. How Art Has The Potential To Change The World.

Can art change the world? Art is a part of my life. 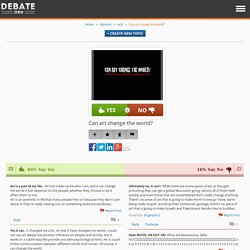 Art has made me be who I am, and it can change the world it just depends on the people, whether they choose to let it affect them or not.Art is an aesthetic in life that many people miss on because they don't care about it; they're really missing out on something quite extraordinary. Yes it can. It changed me a lot, so that it have changed my world. I could not say art always has positive influence on people and society. But it works in a subtle way like provide you with psychological hints. Olafur Eliasson: 'Art will change the world' This article was first published in the October 2015 issue of WIRED magazine. 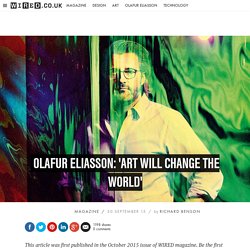 Be the first to read WIRED's articles in print before they're posted online, and get your hands on loads of additional content by subscribing online. When Olafur Eliasson, the multi-award winning artist, polymath intellectual, first tried making and selling consumer electronics, he got it as wrong as he possibly could. It was autumn 2011, and he was touring villages a few hours' drive south of Addis Ababa in Ethiopia, to promote a solar-powered rechargeable LED lamp he had developed to draw attention to the cost and inaccessibility of electricity to Africans. Sales of the lamp in Europe were to subsidise those in Africa, where the distribution network would create a wealth-generating social business. Eliasson's first presentation was in a village whose residents averaged an income of $1 (65p) a day. Berlin studio, 2015.