Abstract art. Introduction to abstract art The word abstract strictly speaking means to separate or withdraw something from something else. 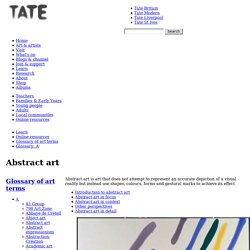 Abstract art is art which is not representational, it could be based on a subject or may have no source at all in the external world. Drawn from reality vs pure abstraction The term abstract art can be applied to art that is based an object, figure or landscape, where forms have been simplified or schematised to create an abstracted version of it. Cubist and fauvist artists depended on the visual world for their subject matter but opened the door for more extreme approaches to abstraction.The term is also applied to art that uses forms, such as geometric shapes or gestural marks, which have no source at all in an external visual reality.

Pioneers of ‘pure’ abstract painting were Kazimir Malevich and Piet Mondrian from about 1910–20. Further reading. Five ways to look at Malevich’s Black Square. 1. 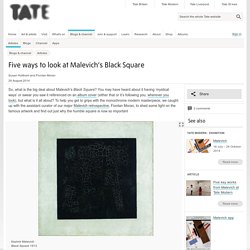 It is the first time someone made a painting that wasn’t of something Or at least it’s often held to be so, and the Kiev-born artist Kazimir Malevich certainly thought it was (though the dispute rages on). He wrote in a handout to accompany its first showing in the exhibition The Last Exhibition of Futurist Painting 0. 10: Up until now there were no attempts at painting as such, without any attribute of real life…Painting was the aesthetic side of a thing, but never was original and an end in itself.

He made his intention clear; he wanted to completely abandon depicting reality and instead invent a new world of shapes and forms that belonged exclusively in the realm of art for art’s sake. 2. The first Black Square (Malevich actually painted not one, but four versions between 1915 and 1930) was (we believe) painted in 1915, although Malevich actually dated it 1913 - maybe with an eye to his legacy as the father of abstraction. 3. So what is exactly is suprematism?

4. 5. Beauty, Morals and Voluptuousness in the England of Oscar Wilde. In Search of a New Ideal of Beauty, 1860–1870 Thomas ArmstrongThe Hay Field© V&A Images In Britain, in the mid-19th century, a cacophony of styles and theories shook the art world and the applied arts. 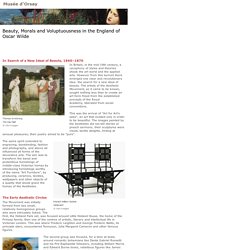 However from this turmoil there emerged one clear and revolutionary idea: the search for a new ideal of beauty. Theory - Media Purity. Introduction to Media Purity 'Purity' can be defined as an untainted and desirable object or reality. 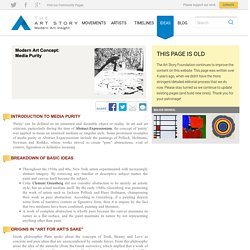 In art and art criticism, particularly during the time of Abstract Expressionism, the concept of 'purity' was applied to mean an unmixed medium or singular style. Some prominent examples of media purity in Abstract Expressionism include the paintings of Pollock, Hofmann, Newman and Rothko, whose works strived to create "pure" abstractions, void of context, figuration or definitive meaning.

Breakdown of Basic Ideas Throughout the 1930s and 40s, New York artists experimented with increasingly abstract imagery. Art for art's sake: V&A to celebrate aesthetic movement. At a time of anxious austerity it could be just what is needed: an examination of one of the most flamboyant and joyously bohemian art movements there has ever been. 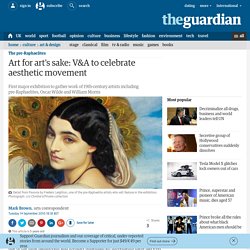 The V&A announced today that it is to mount the first ever major exhibition devoted to the aesthetic movement of the late 19th century, looking at a group of artists who placed the importance of beauty above everything else and followed a mantra that said let us value art for art's sake. The show will bring together 300 objects, including 60 paintings, to celebrate a British movement that flourished between 1860 and 1900 and whose members included pre-Raphaelite artists such as Edward Burne-Jones, Dante Gabriel Rossetti and Frederic Leighton as well as Oscar Wilde and William Morris.

Co-curator Stephen Calloway said now was a particularly good time to shine a spotlight on the aesthetes. Calloway said there was much contemporary art and design that was not aiming to be beautiful or comfortable to live with. Art for Art's Sake at Design San Francisco. Whistler: A Life for Art's Sake – review. It is one of the great unfairnesses in life that bad people sometimes produce great art. 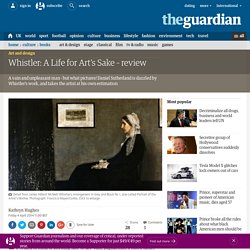 That is certainly true of James Abbott McNeill Whistler, about whom it is hard to think of anything nice to say. Vain, pugnacious, a rotten father and kind to his mother only because he was terrified of her, Whistler is not the sort of man you relish spending 400-plus pages with. But then you look at his Nocturnes – in which the industrial Thames becomes a serene, shimmering mystery – and you realise you could forgive him almost anything.

Art for Art's Sake 1870s-1880s. Should art really be for its own sake alone? You often hear it said that "museums of art are our new churches": in other words, in a secularising world, art has replaced religion as a touchstone of our reverence and devotion. 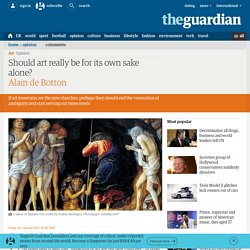 It's an intriguing idea, part of the broader ambition that culture should replace scripture, but in practice art museums often abdicate much of their potential to function as new churches (places of consolation, meaning, sanctuary, redemption) through the way they handle the collections entrusted to them. While exposing us to objects of genuine importance, they nevertheless seem unable to frame them in a way that links them powerfully to our inner needs. Resistance to Replication. For the past several decades art theorists have been wrestling with the consequences of fine art’s accelerated absorption into technologies of reproduction. 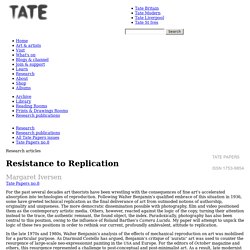 Following Walter Benjamin’s qualified embrace of this situation in 1936, some have greeted technical replication as the final deliverance of art from outmoded notions of authorship, originality and uniqueness. The more democratic dissemination possible with photography, film and video positioned them as the contemporary artistic media. Others, however, reacted against the logic of the copy, turning their attention instead to the trace, the authentic remnant, the found object, the index. Paradoxically, photography has also been central to this position, owing to the influence of Roland Barthes’s Camera Lucida.

My paper will attempt to unpick the logic of these two positions in order to rethink our current, profoundly ambivalent, attitude to replication. James Abbott McNeill Whistler - Bio. James Abbott McNeill Whistler, the American expatriate whose philosophy “l’art pour l’art” [art for art’s sake] significantly influenced European and American artists in the late nineteenth century, was born in Lowell, Massachusetts. 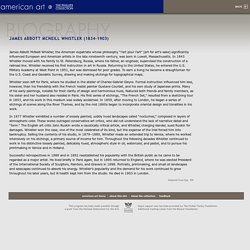 In 1843 Whistler moved with his family to St. Art for Art's Sake - Modern Art Terms and Concepts. Synopsis The phrase 'art for art's sake' condenses the notion that art has its own value and should be judged apart from any themes which it might touch on, such as morality, religion, history, or politics. 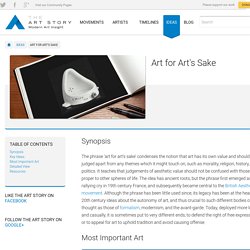 It teaches that judgements of aesthetic value should not be confused with those proper to other spheres of life. The idea has ancient roots, but the phrase first emerged as a rallying cry in 19th century France, and subsequently became central to the British Aesthetic movement. Aesthetic Formalism. Formalism in aesthetics has traditionally been taken to refer to the view in the philosophy of art that the properties in virtue of which an artwork is an artwork—and in virtue of which its value is determined—are formal in the sense of being accessible by direct sensation (typically sight or hearing) alone. While such Formalist intuitions have a long history, prominent anti-Formalist arguments towards the end of the twentieth century (for example, from Arthur Danto and Kendall Walton according to which none of the aesthetic properties of a work of art are purely formal) have been taken by many to be decisive. Yet in the early twenty-first century there has been a renewed interest in and defense of Formalism.

Contemporary discussion has revealed both “extreme” and more “moderate” positions, but the most notable departure from traditional accounts is the move from Artistic to Aesthetic Formalism. The presentation below is divided into five parts. Part 1 outlines an historical overview.