iMotion HD - Time-lapse and Stop-motion app for iPhone / iPad. 3D Animation Apps Software for iOS, iPhone, iPad, Android. Recording the Trace of Movement: Past and Present. In her current exhibition, Motion Capture Drawings, at London Gallery West (3rd February – 4th March 2012), artist Susan Morris has captured her own movements over a period of time in a motion capture studio and painstakingly converted the data via algorithms into lines, which are printed onto photographic paper. 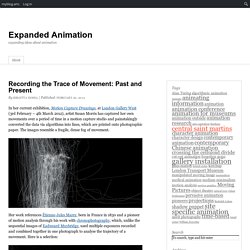 The images resemble a fragile, dense fog of movement. Her work references Étienne-Jules Marey, born in France in 1830 and a pioneer of motion analysis through his work with chronophotography, which, unlike the sequential images of Eadweard Muybridge, used multiple exposures recorded and combined together in one photograph to analyse the trajectory of a movement. Here is a selection: Marey’s work was a clear influence on the Futurists and other artists concerned with representing speed and motion in painting.

Compare the image above, Etienne Jules Marey, Étude de l’homme, chronophotographie, 1887 with Marcel Duchamp’s iconic Nude Descending a Stair, 1912. Animation Express. Animation Desk Cloud - Create Animation and Express Your Ideas on the App Store. The Best Animation App on Mobile Devices. Loop - Hand-drawn animation tool for your iPad by Universal Everything (@universalevery) Created by Universal Everything and inspired by the working methodology of Matt Pyke (UE lead), Loop is a drawing app for iPad that lets you easily create short hand-drawn animations and share them via email, Tumblr and in the Loop gallery. 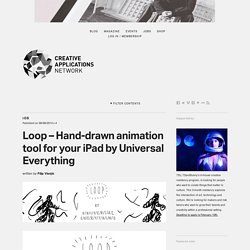 Matt is known for using pen and paper to sketch ideas and develop creative direction for projects. Like in Communion (image), project he worked on with Field.io or Nike Flyknit ‘Fit’ Installation (image) projects we previously mentioned on CAN, Matt has always used sketches as a communication tool to both visualise and describe ideas to the diverse team of collaborators.

Loop is an attempt to fill the gap, create a tool that is simple, easy to use and expressive that adds a time dimension to a simple quick sketch. Apart from the fact that most UI elements in the app were “hand” drawn, the app includes great tools that make process of creating animations fast and engaging. Download from AppStore ($0.99) | Loop Gallery | Universal Everything. iPad Animation with Flip Boom Draw. I just did a little 30 second animation on the iPad, using Flip Boom Draw. 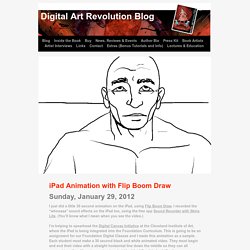 I recorded the “whooaaa” sound effects on the iPad too, using the free app Sound Recorder with Skins Lite. (You’ll know what I mean when you see the video.) I’m helping to spearhead the Digital Canvas Initiative at the Cleveland Institute of Art, where the iPad is being integrated into the Foundation Curriculum. This is going to be an assignment for our Foundation Digital Classes and I made this animation as a sample. 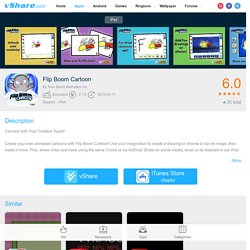 Create your own animated cartoons with Flip Boom Cartoon! Use your imagination to create a drawing or choose a clip-art image, then make it move. Plus, share video and more using the same iCloud or via AirDrop! Share on social media, email or be featured in our iPad magazine: BOOM Time. It’s that easy and fun! Looks like the word is out! FEATURES Connect: Create Together on the Same iCloud or via AirDrop Team up with family and friends to complete fun cartoons on different iPads. Documentation - Flip Boom Draw Windows 8 Documentation. Toon Boom Products. iPad Animation with Flip Boom Draw. 8 Great iPad Apps for Creating Stop Motion Videos. 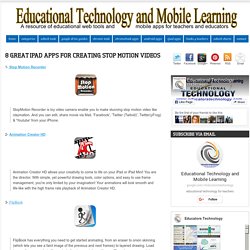 And you can edit, share movie via Mail, 'Facebook', 'Twitter (Twitvid)', Twitter(yFrog) & 'Youtube' from your iPhone. 2- Animation Creator HD Animation Creator HD allows your creativity to come to life on your iPad or iPad Mini! You are the director. 3- FlipBook FlipBook has everything you need to get started animating, from an eraser to onion skinning (which lets you see a faint image of the previous and next frames) to layered drawing. 4- iMovie Make beautiful HD movies anywhere with iMovie, the fast and fun moviemaking app that puts everything you need to tell your story at your fingertips. 5- My Stop Action Your movies are made up of a series of photos - take each photo in turn, with a semi-transparent overlay (onion skin) of the previous frame to guide you.