North Atlantic storm to lash the UK, push temperatures at the North Pole 50 degrees above normal. The same weather system that spawned devastating storms across a large swath of the country over the weekend is expected to “explode” into a monstrous storm over Iceland by Wednesday. 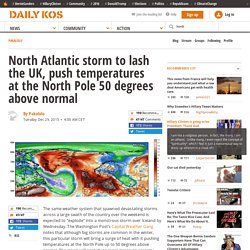 The Washington Post’s Capital Weather Gang notes that although big storms are common in the winter, this particular storm will bring a surge of heat with it pushing temperatures at the North Pole up to 50 degrees above normal. The storm will contribute more misery to recently flooded areas in the United Kingdom as well. The President Delivers a Statement on the Paris Climate Agreement — Act On Climate. PRESIDENT OBAMA: In my first inaugural address, I committed this country to the tireless task of combating climate change and protecting this planet for future generations. 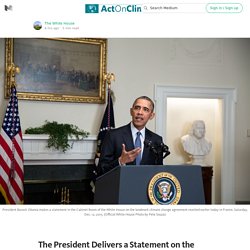 Two weeks ago, in Paris, I said before the world that we needed a strong global agreement to accomplish this goal — an enduring agreement that reduces global carbon pollution and sets the world on a course to a low-carbon future. A few hours ago, we succeeded. We came together around the strong agreement the world needed. We met the moment. Johan Rockstrom: Let the environment guide our development. Surging Seas: Risk Zone Map. Introduction | Methods and Qualifiers | Data Layers | Sources | Special Thanks | Site Credits | Legal Introduction Climate Central’s Surging Seas: Risk Zone map shows areas vulnerable to near-term flooding from different combinations of sea level rise, storm surge, tides, and tsunamis, or to permanent submersion by long-term sea level rise. 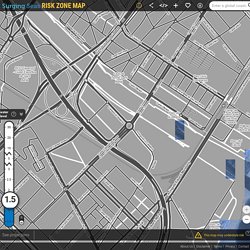 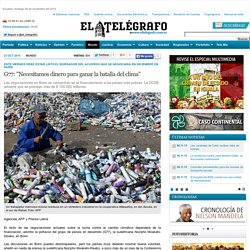 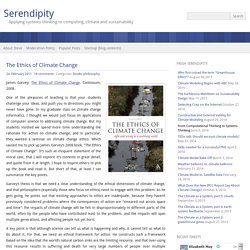 Continuum, 2008. One of the pleasures of teaching is that your students challenge your ideas, and push you in directions you might never have gone. In my graduate class on climate change informatics, I thought we would just focus on applications of computer science to addressing climate change. But my students insisted we spend more time understanding the rationale for action on climate change, and in particular, they wanted a seminar on climate change ethics. Which caused me to pick up James Garvey’s 2008 book, “The Ethics of Climate Change”. Surging Seas: Mapping Choices. Lock-In | Timing | Choices | Impacts | Sources | Help | Team | Funding | Legal Introduction These maps are based on peer-reviewed scientific research led by Benjamin Strauss and Scott Kulp of Climate Central in collaboration with Anders Levermann of the Potsdam Institute of Climate Impact Research, and published in Proceedings of the National Academy of Sciences of the United States of America. 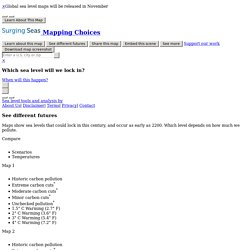 They currently cover the United States, but will be extended globally in November, along with our Risk Zone Map focused on near-term sea level rise and coastal flood risk. If Global Warming Is a Hoax … — Climate Desk. The Oil Crash: Tecnología no es energía. World Energy Consumption Since 1820 in Charts. Figure 1 shows the huge increase in world energy consumption that has taken place in roughly the last 200 years. 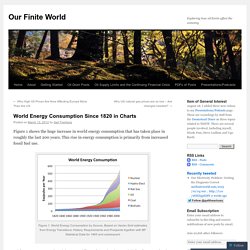 This rise in energy consumption is primarily from increased fossil fuel use. Figure 1. World Energy Consumption by Source, Based on Vaclav Smil estimates from Energy Transitions: History, Requirements and Prospects together with BP Statistical Data for 1965 and subsequent With energy consumption rising as rapidly as shown in Figure 1, it is hard to see what is happening when viewed at the level of the individual. To get a different view, Figure 2 shows average consumption per person, using world population estimates by Angus Maddison. Figure 2. On a per capita basis, there is a huge spurt of growth between World War II and 1970. In this post, I provide additional charts showing long-term changes in energy supply, together with some observations regarding implications.

World per Capita Energy Consumption. What We Know. The American Association for the Advancement of Science (AAAS) is the world’s largest non-government general science membership organization and the publisher of the Science family of journals. 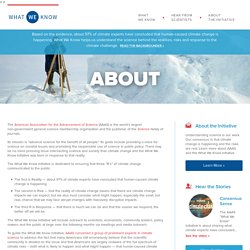 Its mission is “advance science for the benefit of all people.” Its goals include providing a voice for science on societal issues and promoting the responsible use of science in public policy. There may be no more pressing issue intersecting science and society than climate change and the What We Know initiative was born in response to that reality. 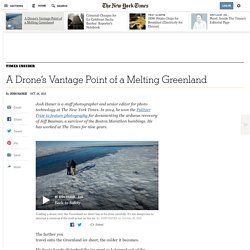 In 2014, he won the Pulitzer Prize in feature photography for documenting the arduous recovery of Jeff Bauman, a survivor of the Boston Marathon bombings. He has worked at The Times for nine years. Continue reading the main story Video. Esta es la relación entre el aumento de la intensidad de los huracanes y el cambio climático. September blew away the margin for Earth's warmest month on record. September 2015 was the warmest such month for Planet Earth since such data began in 1880, and very likely long before that, according to data released Wednesday by the National Oceanic and Atmospheric Administration (NOAA). 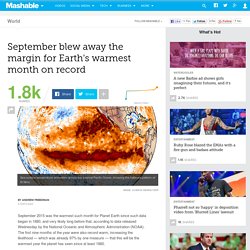 Huffingtonpost. France launches global drive for climate deal. France has launched an unprecedented diplomatic drive to shepherd nations big and small towards a major climate change deal, ahead of a Paris summit next month that is the next major make-or-break moment for the movement against global warming. Every one of France’s ambassadors, in embassies and consulates around the globe, has been educated on the demands of climate change, and instructed in how to communicate the messages to the governments they deal with, ahead of the summit, which starts on 30 November. Ambassadors have been holding public events, private meetings, talks with their diplomatic counterparts, businesses, NGOs and even schoolchildren. At home, the outer walls of the foreign ministry, a stately 19th-century edifice on the banks of the Seine, are covered in a series of banners declaring, in several languages, the messages of Paris Climat 2015.

Climate change and the ills of capitalism are often harped on as two of the biggest threats to society, but many of us have trouble picturing such far-off threats. Artist Issac Cordal offers us a new perspective on these issues through his provocative series of tiny cement sculptures that challenge our views of society. Thoughtfully arranged without the need for exposition, these miniaturized scenes are often arranged as site-specific street art interventions. Cement Eclipses @ Barcelona - Isaac Cordal. Waiting for climate change - Nantes, France - Isaac Cordal. Waiting for climate change is an installation for the moat of the Château des Ducs de Bretagne, in Nantes, and exposed during the summer of 2013.

The installation is composed of 14 floating sculptures that move depending on the wind and the currents of the water. As part of Isaac Cordal’s endeavour to spread his sculptures throughout Nantes, from the Temple du Goût to Place du Bouffay, by way of the Quartier des Olivettes neighbourhood, he has placed a series of characters wearing business suits in the Château moat. Impassive and blasé, they absently watch the water level rise. For the first time, they are life-size, almost as if they were sizing themselves up to Château’s massive ramparts. How we are all contributing to the destruction of coral reefs: Sunscreen. A marine protected area in Papua New Guinea. (ARC COE for Coral Reef Studies/Marine Photobank/Reuters) The sunscreen that snorkelers, beachgoers and children romping in the waves lather on for protection is killing coral and reefs around the globe.

And a new study finds that a single drop in a small area is all it takes for the chemicals in the lotion to mount an attack. The study, released Tuesday, was conducted in the U.S. Virgin Islands and Hawaii several years after a chance encounter between a group of researchers on one of the Caribbean beaches, Trunk Bay, and a vendor waiting for the day’s invasion of tourists. Uk.businessinsider. Uk.businessinsider. Sometimes all it takes is a little perspective to see how our actions are affecting the planet. And what better perspective than from space? Climate change due to human activity is causing visible shifts on our planet, and NASA is uniquely positioned to observe these effects.

"If we continue on our current course, it's going to be hard to feed this planet because it's so hot," Ellen Stofan, NASA's chief scientist, told Business Insider. In fact, photosynthesis — the process all plants use to convert carbon dioxide into carbohydrates — declines rapidly at temperatures above about 95 degrees Fahrenheit, Stofan explained during a talk Monday at The James Beard Foundation Food Conference, a meeting to discuss the future of food. Wal-Mart Stores - Global 500 2014. Companies are ranked by total revenues for their respective fiscal years ended on or before March 31, 2015. All companies on the list must publish financial data and report part or all of their figures to a government agency.

Takepart. Climate change is getting worse — and U.N. climate reports are getting harder to understand. Homepage.