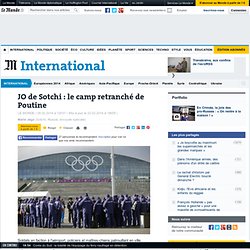 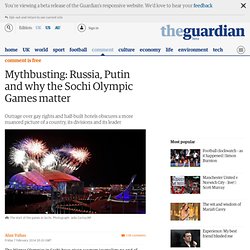 Despite the just concern about gay rights and entertaining tweets about Sochi’s half-built hotels, a number of persistent stories about Russia and its dissidents could use a little clearing up. To that end, consider the following … 1. Vladimir Putin probably doesn’t care about LGBT rights, one way or another As plenty of astute observers have noted, Putin doesn’t tailor domestic policy to international demands. First up were the Americans (remember when he blamed Hillary Clinton for protests?) 1a. 1b. The point here is that it’s not just Putin. 2.

At least not in the sense of a band which sings songs and plays music, it’s not. Pussy Riot is a political art group with punk and Slavoj Zizek as philosophical touchstones. In their infamous cathedral performance, you’ll notice that they’re not playing instruments – they’re simply shouting political verses. 2a. 3.

Sochi 2014: Vladimir Luxuria arrested for holding 'Gay is OK' banner. A prominent Italian gay rights campaigner and former MP has been arrested in Sochi while watching the Winter Olympics with a banner reading "Gay Is Ok" in Russian, two activists have said. 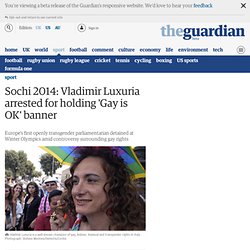 Vladimir Luxuria, a television personality and actor who became Europe's first openly transgender parliamentarian when she was elected to the Italian chamber of deputies, reportedly called the heads of two gay rights organisations in Rome to say she had been detained on Sunday by Russian police. "She was arrested by the police at Sochi while she was watching the Olympics with a banner which read, in Russian, 'Gay is ok'," Imma Battaglia, honorary president of the Di'Gay Project, told Corriere.it. Luxuria had also sent a text message saying: "Help me I am detained. I am alone," she added, saying the television star had not been able to understand what police station she had been taken to. Sochi 2014: world authors join protest against Putin. More than 200 prominent international authors, including Günter Grass, Salman Rushdie, Margaret Atwood and Jonathan Franzen, have joined forces to denounce the "chokehold" they say Russia's anti-gay and blasphemy laws place on the freedom of expression, amid a growing swell of protest on the eve of the opening of the Sochi Winter Olympics. 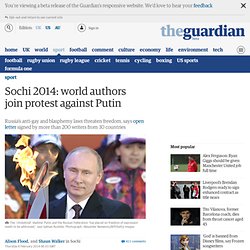 The authors' open letter, published in the Guardian on Thursday, comes as athletes and journalists from around the world descend on the Black Sea resort before the lavish opening ceremony at a specially built stadium on Friday evening. President Vladimir Putin has spoken of the Games as a personal project to show the world Russia's greatness and its ability to host such major events, but the build-up has been marred by controversy over corruption and rights abuses in Russia. German president boycotts Sochi Winter Olympics. The German president has become the first major political figure to boycott the Sochi Winter Olympics in February. 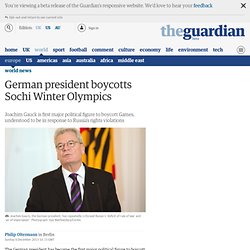 According to German weekly Der Spiegel, Joachim Gauck last week told the Kremlin of his decision, which is understood to be a response to the Russian government's violations of human rights and harassment of the opposition. Gauck, a former Lutheran pastor who played a key part in the East German protest movement before the fall of the Berlin Wall, has declined any official visits to Russia since coming to office in March 2012 and repeatedly criticised the country's "deficit of rule of law" and "air of imperialism". In June, a scheduled meeting between Gauck and his Russian counterpart, Vladimir Putin, was cancelled – supposedly because of clashing schedules. Gauck visited the Olympics and the Paralympics in London last summer. The head of the Russian parliament's foreign delegation on Sunday criticised Gauck's decision. 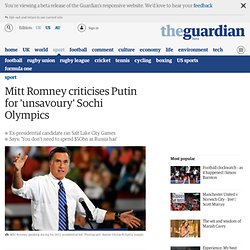 However Romney, who made his name turning around the Salt Lake City Winter Olympics in 2002 before running unsuccessfully for president as a Republican in 2008 and 2012, risks being accused of hypocrisy. Several officials who worked alongside Romney in Salt Lake City have gone on record accusing him of using the Games for his own political gain. Romney famously approved a series of Olympic pins bearing his own face, including one in which he was surrounded by official Games mascots beneath the slogan: “Hey Mitt, We Love You!” Appearing on NBC’s Meet the Press on Sunday, Romney complained that public funds for Olympics were being used “cynically, to show off the politicians in a country”, and said the International Olympic Committee should cap the amount spent on the Games.

5 reasons why Sochi's Olympics may be the most controversial Games yet. On 7 February, the Sochi Winter Olympics will start. 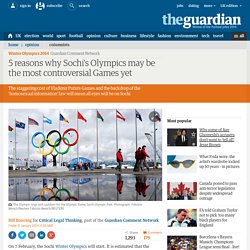 It is estimated that the Games will cost at least $51bn – the most expensive in history. Russia will spend more than the $40bn China spent on the 2008 summer Olympics. The UK spent some $15bn on the summer Olympics in 2012. Maria-alyokhina-of-pussy-riot-on-the-olympics-deceptive-face. The-games-putin-plays. Why-russia-wont-interfere. MOSCOW — of and the Ukrainian opposition leaders signed an agreement on Friday that ended the deadly protests in Kiev by promising a new constitution and early elections. 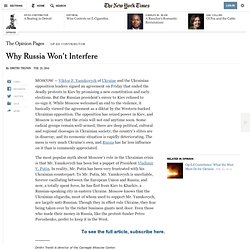 But the Russian president’s envoy to Kiev refused to co-sign it. While Moscow welcomed an end to the violence, it basically viewed the agreement as a diktat by the Western-backed Ukrainian opposition. The opposition has seized power in Kiev, and Moscow is wary that the crisis will not end anytime soon. Some radical groups remain well-armed; there are deep political, cultural and regional cleavages in Ukrainian society; the country’s elites are in disarray; and its economic situation is rapidly deteriorating. Stalins-presence-is-still-felt-in-sochi. Photo SOCHI, Russia — The absurdity of the juxtaposition of the festival of commercialism known as the Olympics, and the dacha of Stalin, a leader of the proletariat, was jarringly apparent at a security gate in the hills overlooking the Black Sea. 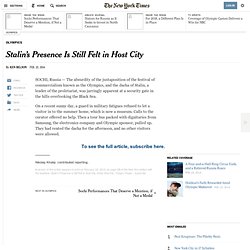 On a recent sunny day, a guard in military fatigues refused to let a visitor in to the summer home, which is now a museum. Calls to the curator offered no help. Then a tour bus packed with dignitaries from Samsung, the electronics company and Olympic sponsor, pulled up. They had rented the dacha for the afternoon, and no other visitors were allowed. 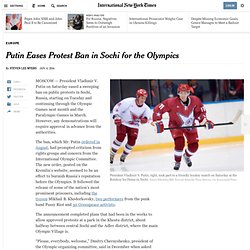 Krise in der Ukraine: Putins schwerste Entscheidung - SPIEGEL ONLINE - Nachrichten - Politik. The Sochi Games are leverage to force Russia to back down on homophobia. For many athletes, myself included, participating in the Olympics is the highlight of their careers. The four Games I took part in were the culmination of years of hard work, and an opportunity for me to show what I was capable of on a world stage.

I was lucky to be able to live my dream, and to be open and proud of who I am: an athlete, Olympian, Australian, lesbian.