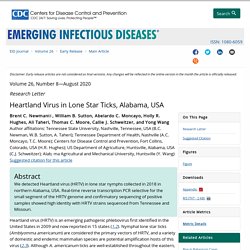 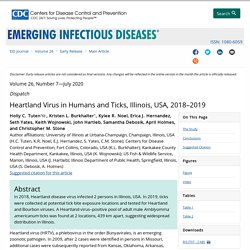 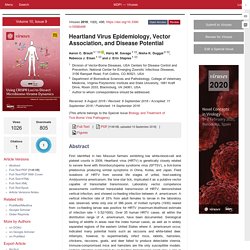 Field isolations of HRTV from several life stages of unfed, host-seeking Amblyomma americanum, the lone star tick, implicated it as a putative vector capable of transstadial transmission. Laboratory vector competence assessments confirmed transstadial transmission of HRTV, demonstrated vertical infection, and showed co-feeding infection between A. americanum. A vertical infection rate of 33% from adult females to larvae in the laboratory was observed, while only one of 386 pools of molted nymphs (1930) reared from co-feeding larvae was positive for HRTV (maximum-likelihood estimate of infection rate = 0.52/1000). LDH_LA_GOV 11/07/18 Heartland and Bourbon virus testing guidance. CLINICAL INFECTIOUS DISEASES 15/02/18 Novel Clinical and Pathologic Findings in a Heartland Virus–Associated Death. 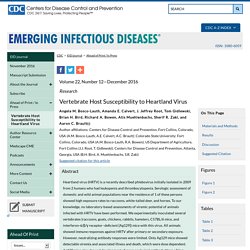 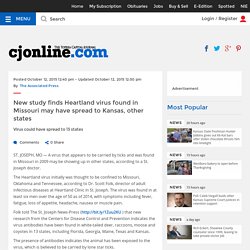 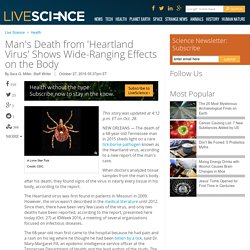 ET on Oct. 28. NEW ORLEANS — The death of a 68-year-old Tennessee man in 2015 sheds light on a rare tick-borne pathogen known as the Heartland virus, according to a new report of the man's case. When doctors analyzed tissue samples from the man's body after his death, they found signs of the virus in nearly every tissue in his body, according to the report. The Heartland virus was first found in patients in Missouri in 2009. However, the virus wasn't described in the medical literature until 2012. The 68-year-old man first came to the hospital because he had pain and a rash on his leg where he thought he had been bitten by a tick, said Dr. SCIENCEMAG 18/09/15 The Heartland virus may occur across the eastern U.S. A dangerous tick-borne virus that first surfaced in humans in Missouri in 2009 appears to be common in wildlife across the central and eastern United States, according to a new study. 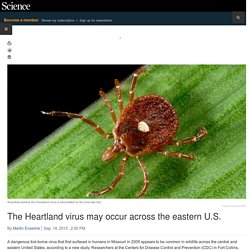 Researchers at the Centers for Disease Control and Prevention (CDC) in Fort Collins, Colorado, found evidence of the so-called Heartland virus in deer, raccoons, coyotes, and moose in 13 states. Doctors should be on the lookout for human patients, the researchers say, because they might go undetected. But other researchers say such warnings are premature. Rev.MVZ Córdoba 21(1):5099-5101, 2016. Heartland virus: a novel and emerging tick-borne encephalitis. Am J Trop Med Hyg 2015 vol. 92 no. 6 1163-1167 Serological Investigation of Heartland Virus (Bunyaviridae: Phlebovirus) Exposure in Wild and Domestic Animals Adjacent to Human Case Sites in Missouri 2012–2013. Recherche avancée Scholar Scholar [PDF] à partir de unl.eduunl.edu [PDF] 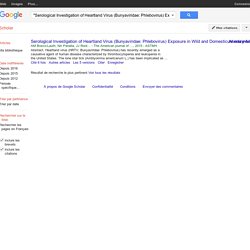 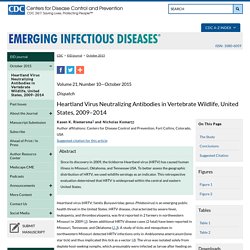 To better assess the geographic distribution of HRTV, we used wildlife serology as an indicator. This retrospective evaluation determined that HRTV is widespread within the central and eastern United States. WIKIPEDIA – Heartland virus. The Heartland virus (HRTV) is a tick-borne phlebovirus of the Bhanja virus serocomplex discovered[when?] 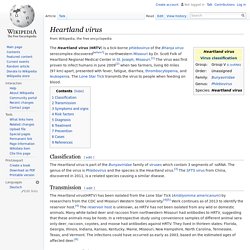 In northwestern Missouri by Dr. Scott Folk of Heartland Regional Medical Center in St. Joseph, Missouri.[1] The virus was first proven to infect humans in June 2009[2] when two farmers, living 60 miles (97 km) apart, presented with fever, fatigue, diarrhea, thrombocytopenia, and leukopenia. The Lone Star Tick transmits the virus to people when feeding on blood. Classification[edit] The Heartland virus is part of the Bunyaviridae family of viruses which contain 3 segments of -ssRNA. CDC 28/03/14 Notes from the Field: Heartland Virus Disease — United States, 2012–2013.

Campuses: Go to the U of M home page Minnesota Agricultural Experiment Station. POPSCI 29/09/15 VIRAL LESSONS FROM THE HEARTLAND. PARASITES & VECTORS 01/10/13 New vector-borne pathogens in the US. Ixodes scapularis Infectious diseases are considered to be “emerging” or “re-emerging” if they have increased in incidence in the previous two decades or if they threaten to increase in the near future. The causes of infectious disease emergence vary but include the development of resistance of pathogens, increased global trade and travel, increased public awareness, climate change, enhanced levels of surveillance or enhanced surveillance methodologies, socioeconomic change and the perturbation of ecosystems.

Recently a number of novel vector-borne pathogens have been identified in the US. UNIVERSITY OF TENNESSEEE 08/01/13 UT Institute of Agriculture graduate helps solve mystery of new Heartland virus. Margot Emery, memery@tennessee.edu Page Content University of Tennessee graduate Jessica Harmon, an entomologist with the Centers for Disease Control and Prevention, is among a team of researchers responsible for linking the newly discovered Heartland virus with its cause. Harmon and other scientists with the CDC have identified the virus as a tick-borne disease carried by nymphs of Lone Star ticks. The finding is the result of two years of intensive fieldwork focused on tick collection and analysis conducted around the farms in Missouri where two farmers came down with a strange illness in 2009. Virologists with the CDC discovered it was a disease no one had seen before.

Harmon, who works in the CDC’s Division of Vector-borne Diseases, has been a part of the fieldwork, including design of the research approach used in the investigation. “The collaboration on this project has been huge,” Harmon says. Am J Trop Med Hyg. Sep 4, 2013; 89(3): 445–452. First Detection of Heartland Virus (Bunyaviridae: Phlebovirus) from Field Collec. We collected ticks and mosquitoes on farms owned by the two case-patients who had previously been hospitalized because of infection with HRTV, a newly described Phlebovirus. Our goal was to incriminate potential arthropod vectors for this newly described human pathogen. Additionally, we sampled similar farms not associated with HRTV disease and public property in northwestern Missouri to determine the geographic distribution of the virus and its prevalence in potential vector species.

Amblyomma americanum and D. variabilis were the two most frequently encountered ticks on case-patient properties and represented nearly all ticks collected from 12 sites in northwestern Missouri. Our tick species and abundance data are similar to those reported from previous tick surveys from southern areas of Missouri.29–31. NY TIMES 03/09/12 New Virus Tied to Ticks Poses Puzzle for Doctors. SCIENCE DAILY 22/07/13 Scientists prove ticks harbor Heartland virus, a recently discovered disease in the United States.

Scientists have for the first time traced a novel virus that infected two men from northwestern Missouri in 2009 to populations of ticks in the region, providing confirmation that lone star ticks are carrying the recently discovered virus and humans in the area are likely at risk of infection. The findings were published online today in the American Journal of Tropical Medicine and Hygiene. Dubbed Heartland virus or HRTV, the infection causes fever, headaches, and low white blood cell and platelet counts. The two men infected in 2009, who live about 70 miles apart, were sufficiently ill to require hospitalization. They eventually recovered, and no other cases have been reported.

Disease experts anticipate, however, that more people could become infected. "Ten samples of ticks tested positive for the Heartland virus, nine of which were collected from the property of one of the patients and one that came from conservation lands nearby," said Harry M. Disease Hunting. CIDRAP 22/07/13 Researchers trace novel Heartland virus to Missouri ticks. Researchers have solved part of a medical mystery about a new virus that infected two Missouri men in 2009, confirming the pathogen in lone star ticks near where the patients were infected, then hospitalized, after they were bitten by ticks, according to a study today.

The hunt for the tick that possibly carried the new Heartland virus included collecting 56,428 ticks by combing through brush with flannel pads mounted on bamboo poles, using carbon dioxide-emitting dry ice to lure ticks into plastic containers, and plucking the insects from horses and dogs. The research team, which included investigators from the Centers for Disease Control and Prevention (CDC) and Missouri Western State University, reported their findings today in the latest issue of the American Journal of Tropical Medicine and Hygiene.

The journal is published by the American Society of Tropical Medicine and Hygiene (ASTMH). CDC MMWR 28/03/14 Notes from the Field: Heartland Virus Disease — United States, 2012–2013.