AVMA - Poultry Depopulation. The AVMA supports the use of water-based foam as a method of mass depopulation for poultry in accord with the conditions and performance standards outlined by the US Department of Agriculture's Animal and Plant Health Inspection Service (USDA-APHIS). 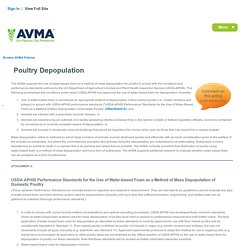 The following summarizes the conditions under which USDA-APHIS has approved the use of water-based foam for depopulation of poultry: Mass depopulation refers to methods by which large numbers of animals must be destroyed quickly and efficiently with as much consideration given to the welfare of the animals as practicable, but where the circumstances and tasks facing those doing the depopulation are understood to be extenuating. Euthanasia involves transitioning an animal to death in a manner that is as painless and stress-free as possible. Infect Ecol Epidemiol. 2016; 6: The impact of biosecurity and partial depopulation on Campylobacter prevalence in Irish broiler flocks with differing levels of hygiene and economic performance. APHIS USDA - MAI 2015 - USDA Avian Influenza Response: Mass Depopulation and Carcass Disposal. PIGSITE 19/02/05 Depopulation: The importance of doing it properly. Featured Articles Depopulation: The importance of doing it properly 19 February 2005 By DuPont Animal Health Solutions - There are now a number of programmes for eliminating diseases from pig units but they are doomed to failure unless the pathogens are eliminated from the unit as well as the animals. 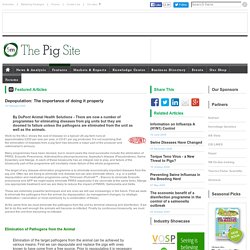 Work by the MLC shows the cost of disease on a typical UK pig farm runs at approximately £200 per sow per year, or £9.81 per pig produced. It is not surprising that the elimination of diseases from a pig farm has become a major part of the producer and veterinarian's armoury. Many programmes have been devised, but in recent years the most successful include the elimination of PRRS, Enzootic Pneumonia, Actinobacillus pleuropneumonia, Aujeszky's disease (Pseudorabies), Swine Dysentery and Mange. The target of any disease elimination programme is to eliminate economically important diseases from the pig unit. PIGSITE - Depopulation and Repopulation. (55) The major costs of establishing a high health herd by depopulation and repopulation are related to the loss in cash flow and ongoing overhead costs between removing the old herd and its sale of pigs and the first pig sold at slaughter from the new one. 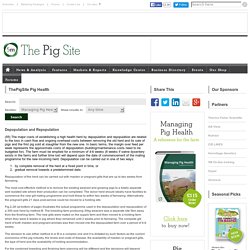 In basic terms, the margin over feed per week represents the approximate costs of depopulation (building/maintenance costs need to be budgeted for). The farm must be emptied for a minimum of 4-6 weeks (8 weeks if swine dysentery exists in the farm) and further time lost will depend upon the date of commencement of the mating programme for the new incoming herd. Depopulation can be carried out in one of two ways: by complete removal of the herd at a fixed point in time, or gradual removal towards a predetermined date.

Repopulation of the herd can be carried out with maiden or pregnant gilts that are up to two weeks from farrowing. The age / weight of the youngest pigs to be sold and the point of depopulation e.g. 30kg liveweight. App. Poult Sci. 2012 Jul;91(7):1558-68. Mass depopulation of laying hens in whole barns with liquid carbon dioxide: evaluation of welfare impact. + Author Affiliations + Author Notes ↵2 Current address: Lynwood Animal Hospital, Ottawa, Canada. 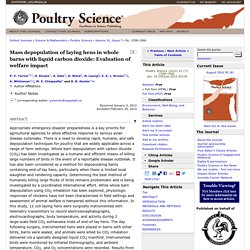 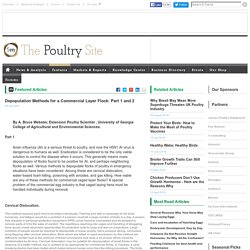 Bruce Webster, Extension Poultry Scientist , University of Georgia College of Agricultural and Environmental Sciences. Part 1 Avian influenza (AI) is a serious threat to poultry, and now the H5N1 AI virus is dangerous to humans as well. Cervical Dislocation. This method requires each bird to be killed individually. Water-Based Foam. This method uses medium expansion water-based foam (similar to fire-fighting foam) to cover birds. Avicides. An avicide is a poison that is more toxic to birds than to other vertebrate species, however, the substance may still be dangerous to non-avians. Other Methods. Electrocution and high speed maceration have been tried in various parts of the world as methods for flock depopulation. 3TROIS3 14/11/08 Auditer l'hygiène de son élevage (1ère partie) « L’hygiène en élevage ne s’invente pas. 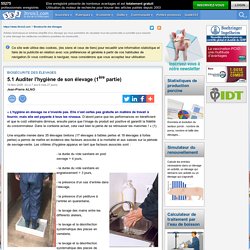