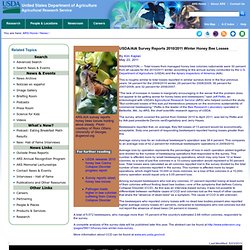 Department of Agriculture (USDA) and the Apiary Inspectors of America (AIA). This is roughly similar to total losses reported in similar surveys done in the four previous years: 34 percent for the 2009/2010 winter, 29 percent for 2008/2009; 36 percent for 2007/2008, and 32 percent for 2006/2007. "The lack of increase in losses is marginally encouraging in the sense that the problem does not appear to be getting worse for honey bees and beekeepers," said Jeff Pettis, an entomologist with USDA's Agricultural Research Service (ARS) who helped conduct the study. 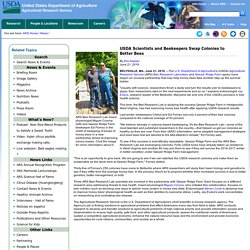 Department of Agriculture's (USDA) Agricultural Research Service (ARS) Bee Research Laboratory and Geezer Ridge Farm apiary have begun an unusual partnership that may help honey bees take another step up the survival ladder. "Usually with science, researchers finish a study and turn the results over to beekeepers to apply; then researchers start on the next experiments and so on," explains entomologist Jay Evans, research leader of the Beltsville, Maryland lab and one of the USDA's pioneers in bee health science.

This time, the Bee Research Lab is studying the success Geezer Ridge Farm in Hedgesville, West Virginia, has had improving honey bee health after applying USDA research results. Last winter, beekeepers Cheryl and Ed Forney lost only 4 percent of their bee colonies compared to the national average of 30 percent. "We believe strongly in science-based beekeeping. "This is an opportunity to give back. ARS USDA 02/08/16 ARS Research Leads to Better Understanding of Bee Health. By Kim Kaplan August 2, 2016 WASHINGTON, August 2, 2016—Bacteria in the gut of young honey bees may provide clues about the impact parasites have on bee health. 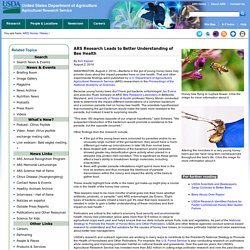 That and other experimental findings were published by U.S. Department of Agriculture's Agricultural Research Service (ARS) researchers in the Proceedings of the National Academy of Sciences. Because young honey bees don't have gut bacteria, entomologist Jay Evans and post-doc Ryan Schwarz at ARS' Bee Research Laboratory in Beltsville, Maryland, and University of Texas at Austin professor Nancy Moran conducted tests to determine the impact different combinations of a common bacterium and a common parasite had on honey bee health. The scientists hypothesized that increasing the gut bacterium would make the bees more resistant to the parasite, but instead it lead to surprising results. "This was 180 degrees opposite of our original hypothesis," said Schwarz. Other findings from the research include, ARS USDA 20/06/07 Colony Collapse Disorder Action Plan - CCD Steering Committee - June 20, 2007.

ARS USDA 12/08/09 Pathogen Loads Higher in Bee Colonies Suffering from Colony Collapse Disorder. By Kim KaplanAugust 12 , 2009 A higher total load of pathogens—viruses, bacteria and fungi—appears to have the strongest link with Colony Collapse Disorder found so far, according to a new study published by Agricultural Research Service (ARS) and university scientists. 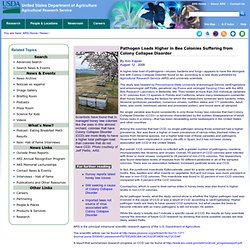 The study was headed by Pennsylvania State University entomologist Dennis vanEngelsdorp and entomologist Jeff Pettis, geneticist Jay Evans and virologist Yanping Chen with the ARS Bee Research Laboratory in Beltsville, Md. They looked at more than 200 individual variables in 91 colonies from 13 apiaries in Florida and California, where many beekeepers overwinter their honey bees. Among the factors for which the researchers screened were bacteria, mites, Nosema (protozoan parasites), numerous viruses, nutrition status and 171 pesticides. Adult bees, wax comb, beebread (stored and processed pollen), and brood were all sampled. Among the colonies that had CCD, no single pathogen among those screened had a higher prevalence.

ARS USDA - Questions and Answers: Colony Collapse Disorder. Honey bees, which are a critical link in U.S. agriculture, have been under serious pressure from a mystery problem: Colony Collapse Disorder (CCD), which is syndrome defined as a dead colony with no adult bees or dead bee bodies but with a live queen and usually honey and immature bees still present. 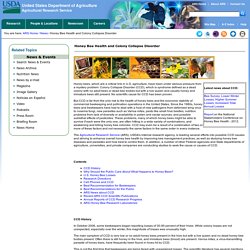 No scientific cause for CCD has been proven. But CCD is far from the only risk to the health of honey bees and the economic stability of commercial beekeeping and pollination operations in the United States. Since the 1980s, honey bees and beekeepers have had to deal with a host of new pathogens from deformed wing virus to nosema fungi, new parasites such as Varroa mites, pests like small hive beetles, nutrition problems from lack of diversity or availability in pollen and nectar sources, and possible sublethal effects of pesticides.