SCIENTIFIC REPORTS 11/10/19 Assessing effects from four years of industry-led badger culling in England on the incidence of bovine tuberculosis in cattle, 2013–2017. Overlap between comparison areas and intervention areas licensed in 2016 Four comparison areas (including central and buffer zones) were excluded from the analyses because more than 25% of their land was overlapped by land in one of the eight intervention areas licenced between 2015 and 2016 (Tables S2, S3). 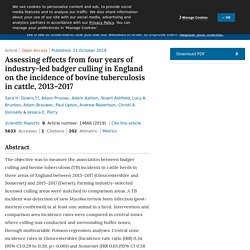 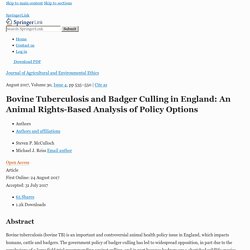 The disease is zoonotic, meaning it can be transmitted from animals to humans. However, the risk to human health is minimal, due to the routine pasteurisation of milk. DEFRA_GOV_UK - FEV 2018 - Bovine TB: consultation on proposals to introduce licensed badger control to prevent the spread of bovine tuberculosis in the Low Risk Area (England) Ecol Evol. 2017 Sep; 7(18): 7213–7230. Assessing the effects of the first 2 years of industry‐led badger culling in England on the incidence of bovine tuberculosis in cattle in 2013–2015. THE GUARDIAN 04/03/18 Badger cull faces review as bovine TB goes on rising. The government is to review the controversial badger cull as part of an inquiry into its strategy to clamp down on bovine TB. 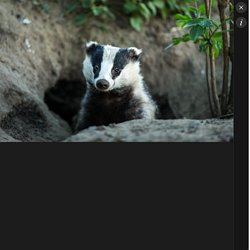 The review raises the possibility that experts conducting it will examine disputed evidence about the cull’s efficacy, potentially paving the way for a change in policy. When the review was announced last month, its terms of reference said it would “not revisit the rationale for current interventions in the strategy. It will take a prospective and not a retrospective view.

It is not a review of badger culling.” Rosie Woodroffe, a senior research fellow at the Zoological Society of London, Institute of Zoology, told the Vet Times that the review was “disappointing because its scope excludes badger culling, which is the most controversial and least evidence-led part of the strategy”. “How will the review panel know what to do?” … we have a small favour to ask. If everyone who reads our reporting, who likes it, helps fund it, our future would be much more secure. FARMINGUK 09/03/18 Welsh farmers urged to participate in 'badger found dead survey' NFU Cymru is urging farmers to participate in the Welsh government's 'badger found dead survey' which continues to be in operation across Wales.The call comes after the most recent published figures by Welsh Government show that 725 of badgers found dead were tested in Wales, in the period September 2014 to August 2017.NFU Cymru says the survey is important so that an accurate picture of the disease in wildlife across Wales is built up.In a joint statement, Wyn Evans, NFU Cymru Livestock Board Chairman and Gareth Richards NFU Cymru Milk Board Chairman said tat surveillance is "essential" in any disease control programme and bovine TB is "no different". 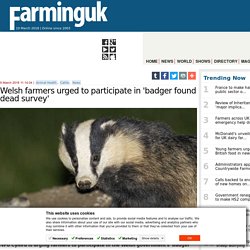 They said: “Bovine TB continues to cause heartache for farming families across Wales therefore we strongly encourage our members and the general public to participate in this survey to help build up an accurate picture of the disease in Wales. CDC EID - MARS 2017 - Au sommaire notamment: Epidemiology of Mycobacterium bovis Disease in Humans in England, Wales, and Northern Ireland, 2002–2014. This activity has been planned and implemented through the joint providership of Medscape, LLC and Emerging Infectious Diseases. 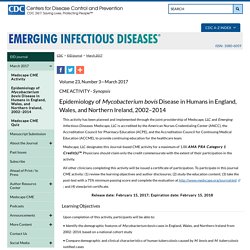 Medscape, LLC is accredited by the American Nurses Credentialing Center (ANCC), the Accreditation Council for Pharmacy Education (ACPE), and the Accreditation Council for Continuing Medical Education (ACCME), to provide continuing education for the healthcare team. Medscape, LLC designates this Journal-based CME activity for a maximum of 1.00 AMA PRA Category 1 Credit(s)™. Physicians should claim only the credit commensurate with the extent of their participation in the activity. All other clinicians completing this activity will be issued a certificate of participation.

To participate in this journal CME activity: (1) review the learning objectives and author disclosures; (2) study the education content; (3) take the post-test with a 75% minimum passing score and complete the evaluation at and (4) view/print certificate. Learning Objectives CME Editor P. HOUSE OF COMMONS 12/01/17 Badgers: Culls in England. Badger culling, as a bovine TB policy measure, is a devolved matter. 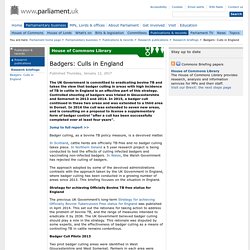 In Scotland, cattle herds are officially TB-free and no badger culling takes place. In Northern Ireland a 5 year research project is being conducted to test the effects of culling infected badgers and vaccinating non-infected badgers. In Wales, the Welsh Government has rejected the culling of badgers. The approach adopted by some of the devolved administrations contrasts with the approach taken by the UK Government in England, where badger culling has been conducted in a growing number of areas since 2013. This briefing focuses on the situation in England. WIKIPEDIA - Badger culling in the United Kingdom. Badger culling in the United Kingdom is being trialled as a way to reduce badger numbers in a set area, in the hope of controlling the spread of bovine tuberculosis (bTB). 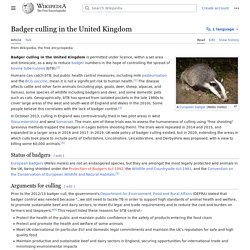 Humans can catch bTB, but public health control measures, including milk pasteurisation and the BCG vaccine, mean it is not a significant risk to human health.[1] The disease affects cattle and other farm animals (including pigs, goats, deer, sheep, alpacas and llamas), and some species of wildlife including badgers, deer and a few domestic pets. Geographically, bTB has spread from isolated pockets in the late 1980s to cover large areas of the west and south-west of England and Wales in the 2010s.

Some people believe this correlates with the lack of badger control.[2] In October 2013, culling in England was controversially trialled in two pilot areas in west Gloucestershire and west Somerset. Status of badgers[edit] Veterinary Record 2007;160:266-268 Public opinions on badger populations and the control of tuberculosis in cattle in the uk. Veterinary Record 2014;175:90-96 Vaccination against tuberculosis in badgers and cattle: an overview of the challenges, developments and current research priorities in Great Britain. 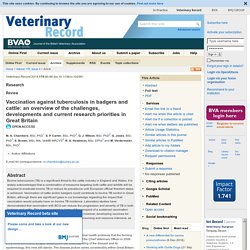 PLOS 10/10/13 The Contribution of Badgers to Confirmed Tuberculosis in Cattle in High-Incidence Areas in England. Introduction Wildlife reservoirs make the control of infectious diseases particularly challenging. 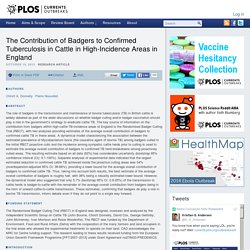 Badgers (Meles meles) are a wildlife host for Mycobacterium bovis, the causative agent of tuberculosis (TB) in cattle1. Various badger-culling strategies have been used in Great Britain in attempts to reduce M. bovis transmission and to stop the spread of disease1. Annually repeated widespread ‘proactive’ culling, using cage-trapping and shooting, has been shown to reduce confirmed TB incidence in cattle herds within culled areas, but it has also been shown to increase risk among cattle herds on land outside, but within 2 km of, the culling area while culling was ongoing2,3,4,5,6. The disease system is complex, with transmission occurring both within and between species. 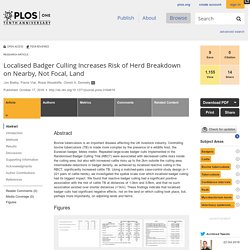 We found that TB test-positive badgers were socially isolated from their own groups but were more important for flow, potentially of infection, between social groups. The distinctive social position of infected badgers may help explain how social stability mitigates, and social perturbation increases, the spread of infection in badgers. Main Text Tuberculosis, caused by Mycobacterium bovis, is a zoonotic infection of cattle and is a global challenge in animal health. We found statistically significant relationships between network position and TB test outcome (Figure 1). Acknowledgements This study was funded by the U.K. References 1R.M. LONDON HER MAJESTY'S STATIONERY OFFICE - MARS 1986 - BADGERS AND BOVINE TUBERCULOSIS - Review of policy. PLOS 12/12/12 BCG Vaccination Reduces Risk of Tuberculosis Infection in Vaccinated Badgers and Unvaccinated Badger Cubs.

Abstract Wildlife is a global source of endemic and emerging infectious diseases. DEFRA 28/01/15 2013 badger cull costs. DEFRA 09/10/13 Badger cull - piloting controls on bovine TB. DEFRA 13/09/13 EU Directive stating requirement for badger cull. DEFRA 13/09/13 Farms and dairies involved in pilot badger culls. DEFRA 08/11/10 Research reports on bovine tb in badgers published. Defra has made public supporting data behind the successful licensing of the first tuberculosis vaccine for badgers (Badger BCG), which was licensed by the Veterinary Medicines Directorate in March this year. The studies were carried out by the Veterinary Laboratories Agency (VLA) and the Food and Environment Research Agency (Fera). The laboratory studies with captive badgers demonstrated that the vaccination of badgers by injection with BCG significantly reduces the progression, severity and excretion of Mycobacterium bovis infection.

Cattle herd incidents, termed breakdowns, that are either ‘prolonged’ (lasting ≥240 days) or ‘recurrent’ (with another breakdown within a specified time period) may be important foci for onward spread of infection. Veterinary Record 15/09/15 Exploration of the power of routine surveillance data to assess the impacts of industry-led badger culling on bovine tuberculosis incidence in cattle herds. C. A. Donnelly, BA, MSc, ScD1, A. I. Bento, BSc (Hons) & ARCS, PhD1, A. V. . + Author Affiliations E-mail for correspondence: c.donnelly@imperial.ac.uk.