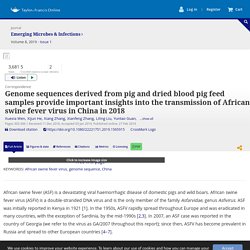 In the 1950s, ASFV rapidly spread throughout Europe and was eradicated in many countries, with the exception of Sardinia, by the mid-1990s [2 Costard S, Wieland B, de Glanville W, et al. The length of the genome of ASFVs varies depending on the isolate, but ranges from 170 to 193 Kb; 150 to 167 open reading frames (ORFs) have been detected from various strains [8–11 Chen X, Yang J, Ji Y, et al. 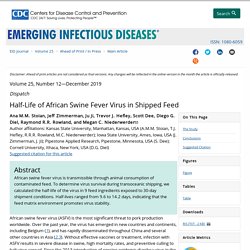 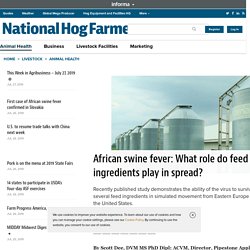 This is the initial report of this disease in the country of China, although it had been reported in Russia and Eastern Europe. ASFV is a very tough virus, as it is very stable outside the host and there is no vaccine currently available. Historically, the virus had been reported to be spread through ticks, wild boars and the movement of contaminated meat products between villages; however, the infected premises in China were thousands of miles from other known cases of ASF. Investigations are currently under way to contain the infection and determine the source of the virus. Pork_org 02/05/19 Assessing the risk of African swine fever virus (ASFV) transmission in feed. KANSAS STATE UNIVERSITY - SEPT 2018 - Frequently Asked Questions about ASFV and CSFV in Feed. KANSAS STATE UNIVERSITY 27/03/18 From feed to fever: Kansas State University researcher studies risk of African swine fever in feed. 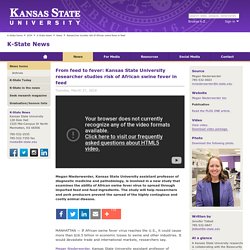 The study will help researchers and pork producers prevent the spread of the highly contagious and costly animal disease. MANHATTAN — If African swine fever virus reaches the U.S., it could cause more than $16.5 billion in economic losses to swine and other industries. It would devastate trade and international markets, researchers say. Megan Niederwerder, Kansas State University assistant professor of diagnostic medicine and pathobiology in the College of Veterinary Medicine, wants to prevent that. Since 2007, African swine fever virus, or ASFV, has spread throughout Eastern Europe and Russia but is not present in the U.S. SOUTH CHINA MORNING POST 12/11/18 China reports first case of African swine fever in animal feed. CDC EID - MAI 2019 - Infectious Dose of African Swine Fever Virus When Consumed Naturally in Liquid or Feed. African swine fever virus (ASFV) is an emerging threat to swine production in North America and Europe. 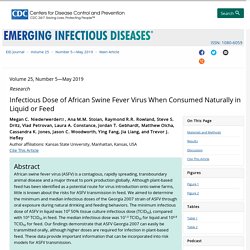 During the past decade, ASFV has spread into Eastern Europe and Russia (1,2) and most recently into China (3,4) and Belgium (5). Disease caused by ASFV is characterized by severe disseminated hemorrhage, and case-fatality rates approach 100% (6). The virus is a member of the Asfarviridae family and is the only known vectorborne DNA virus (7). Challenges to disease control include the lack of available vaccines and the potential for ASFV to become endemic in feral swine and ticks (8). Because no effective vaccine or treatment exists, preventing ASFV introduction is the primary goal of disease-free countries.

Historical outbreaks, including the introduction of ASFV into the Caucasus region in 2007 and subsequent spread into Russia, have been attributed to feeding contaminated pork products (1) or direct contact with pigs (10). PIGSITE 25/07/19 Improved diagnostics needed to reduce ASF risk from soybean meal. Representatives of the Swine Health Information Center (SHIC), soybean commodity groups and US and Canadian soybean meal importers met earlier this month to discuss the risks of imported soybean meal harbouring and transferring the virus responsible for ASF. 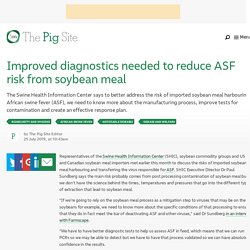 SHIC Executive Director Dr Paul Sundberg says the main risk probably comes from post processing contamination of soybean meal but we don't have the science behind the times, temperatures and pressures that go into the different types of extraction that lead to soybean meal. "If we're going to rely on the soybean meal process as a mitigation step to viruses that may be on the soybeans for example, we need to know more about the specific conditions of that processing to ensure that they do in fact meet the bar of deactivating ASF and other viruses," said Dr Sundberg in an interview with Farmscape.

"The third thing that came out of the research is to develop an agreed upon response plan. PIGSITE 26/07/19 Feed ingredients could transport African swine fever. "When we look at China in particular, we might as well consider that [African swine fever] has pretty well spread throughout most of the country including that southern portion of the country where they produce well more than half of the pigs on the globe," Dr Pyburn said. 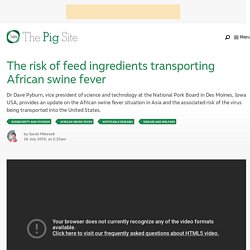 "That's a lot of pigs that are available to be affected or infected with African swine fever. So, it's a concern for us as far as being a potential source of virus that can somehow eventually potentially make its way over here. " The biggest concern Dr Pyburn noted is there could be risk materials that could transport the virus to the US from China or from any of the infected countries. One of the primary risk materials is feed and feed ingredients. "Dr Scott Dee's research has shown that in fact you can transport the virus. In 2014, Dr Dee and his team were deciphering how porcine epidemic diarrhoea (PED) virus had entered the US - a virus that, prior to the 2013 outbreak, had never before been seen in North America.