Policy and Society - 2004 - The Politics of SARS – Rational Responses or Ambiguity, Symbols and Chaos? CLINICAL REVIEW 13/01/05 Clinical review: SARS – lessons in disaster management. Core to any disaster management plan are leaders with clear responsibilities to coordinate efforts and develop policies to contain the disease; to coordinate resource allocation and manpower; to advise and share information regarding infection control and treatment; to share data and research endeavours; to maintain staff morale; and to provide information to various levels of government, health care institutions, front-line workers and the public [1, 13]. 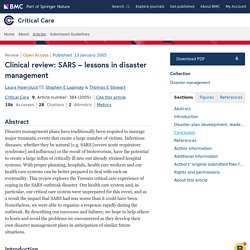 With eerie coincidence, a new coronavirus has emerged on the tenth anniversary of the SARS outbreak. 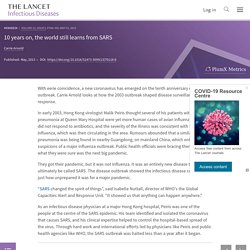 Carrie Arnold looks at how the 2003 outbreak shaped disease surveillance and response. In early 2003, Hong Kong virologist Malik Peiris thought several of his patients with severe pneumonia at Queen Mary Hospital were yet more human cases of avian influenza. Patients did not respond to antibiotics, and the severity of the illness was consistent with H5N1 influenza, which was then circulating in the area.

Rumours abounded that a similar severe pneumonia was being found in nearby Guangdong, on mainland China, which only raised suspicions of a major influenza outbreak. UNIVERSITY OF HONG KONG - 2006 - Thèse en ligne: RISK COMMUNICATION DURING THE SARS EPIDEMIC OF 2003. NATURE 10/07/03 SARS: What have we learned? It's less than four months since the World Health Organization issued global warnings about a mysterious and deadly form of pneumonia. 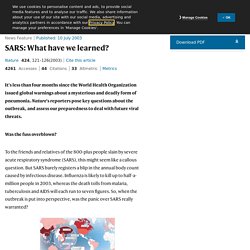 Nature's reporters pose key questions about the outbreak, and assess our preparedness to deal with future viral threats. To the friends and relatives of the 800-plus people slain by severe acute respiratory syndrome (SARS), this might seem like a callous question. But SARS barely registers a blip in the annual body count caused by infectious disease. Influenza is likely to kill up to half-a-million people in 2003, whereas the death tolls from malaria, tuberculosis and AIDS will each run to seven figures.

So, when the outbreak is put into perspective, was the panic over SARS really warranted? UNIVERSITY OF HONG KONG - 2006 - Thèse en ligne: RISK COMMUNICATION DURING THE SARS EPIDEMIC OF 2003. RESPIROLOGY 07/02/19 Severe acute respiratory syndrome and other emerging severe respiratory viral infections. In the World Health Organization (WHO) updated list of blue‐print priority diseases, severe acute respiratory syndrome (SARS) and Middle East respiratory syndrome (MERS) are included together with disease X, which represents the concept that a pathogen currently unknown to cause human disease may lead to a serious international epidemic.1 SARS‐coronavirus (SARS‐CoV) first emerged in November 2002 in Foshan, China, where many healthcare workers (HCW) became infected. 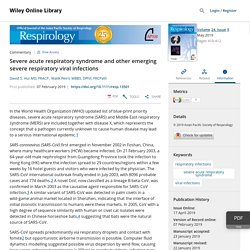 On 21 February 2003, a 64‐year‐old male nephrologist from Guangdong Province took the infection to Hong Kong (HK) where the infection spread to 29 countries/regions within a few weeks by 16 hotel guests and visitors who were infected by the physician. SARS‐CoV spreads predominantly via respiratory droplets and contact with fomite2 but opportunistic airborne transmission is possible. The incubation period of MERS‐CoV infection is over 5 days, but may be as long as 2 weeks (median: 5.2 days (95% CI: 1.9–14.7)).

Biosafety and Health Volume 1, Issue 2, September 2019, Laboratory biosafety in China: past, present, and future. Highlights Since the SARS epidemic, China has constructed a biosafety laboratories network and set up an expert team on LB. 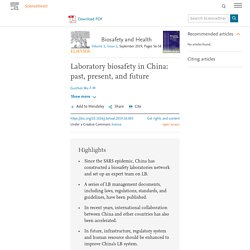 Global Health Journal Volume 3, Issue 3, September 2019, What we have learnt from the SARS epdemics in mainland China? 1. 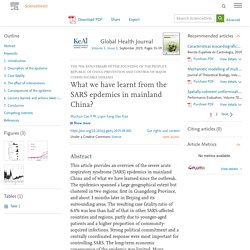 Introduction In 2003, the world was confronted with the emergence of a new and in many cases fatal infectious disease: severe acute respiratory syndrome (SARS). The first case with typical symptoms of SARS emerged in Foshan municipality, Guangdong Province, China, with the onset date of November 16, 2002.1 Five index cases were reported in Foshan, Zhongshan, Jiangmen, Guangzhou, and Shenzhen municipalities of Guangdong Province before January 2003. As a result of initial lack of awareness of SARS by health care workers (HCWs), the disease spread unnoticed in the early stages of the epidemic.

This spreading of the disease was unduly prolonged by limited information sharing. 2. BMC PUBLIC HEALTH 04/04/05 The immediate effects of the severe acute respiratory syndrome (SARS) epidemic on childbirth in Taiwan. Obstetrics services under the NHI program Since its implementation in March 1995, the National Health Insurance (NHI) program provides a mandatory and comprehensive universal health care coverage for all Taiwanese residents. 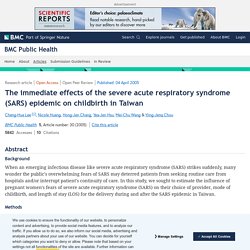 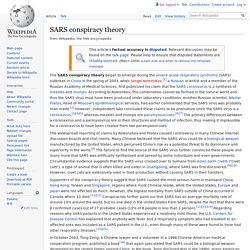 Many Chinese believed that the SARS virus could be a biological weapon manufactured by the United States, which perceived China's rise as a potential threat to its dominance and superiority in the world.[8] The failure to find the source of the SARS virus further convinced these people and many more that SARS was artificially synthesised and spread by some individuals and even governments. Circumstantial evidence suggests that the SARS virus crossed over to humans from Asian palm civets ("civet cats"), a type of animal that is often killed and eaten in Guangdong, where SARS was first discovered.[9][10] However, civet cats are extensively used in food production without causing SARS in their handlers. 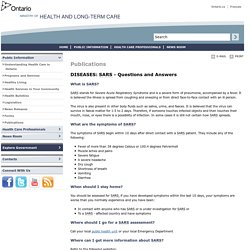 SARS stands for Severe Acute Respiratory Syndrome and is a severe form of pneumonia, accompanied by a fever. It is believed the illness is spread from coughing and sneezing or from direct face-to-face contact with an ill person. The virus is also present in other body fluids such as saliva, urine, and faeces. It is believed that the virus can survive in faecal matter for 1.5 to 2 days. THE LANCET 08/04/03 Coronavirus as a possible cause of severe acute respiratory syndrome. NATURE 10/12/18 Origin and evolution of pathogenic coronaviruses. Computational and Structural Biotechnology Journal Volume 17, 2019, Epidemic Models of Contact Tracing: Systematic Review of Transmission Studies of Severe Acute Respiratory Syndrome and Middle East Respiratory Syndrome. WHOSummary of probable SARS cases with onset of illness from 1 November 2002 to 31 July (2018), p. 2003 WHOMERS situation update July 2018 G. 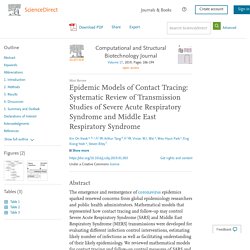 Chowell, F. Abdirizak, S. BMC Med, 13 (2015), p. 210. NATURE 30/10/03 SARS virus infection of cats and ferrets - There is now a choice of animal models for testing therapies against the human virus. He reservoir of the coronavirus isolated from patients with severe acute respiratory syndrome (SARS) Ann Glob Health. 2016 Jan-Feb;82(1):180-8. From SARS to Avian Influenza: The Role of International Factors in China's Approach to Infectious Disease Control. Over the past decades global environmental change, globalization, urbanization, and the rise in movement of people have increased the risk for pandemic diseases. Health is no longer the sole responsibility of national governments and an international health governance system has emerged, making transparency, cooperation, and coordinated multilateral responses the international norm. The role of international political factors in motivating changes in domestic health policy was, until recently, largely neglected by international relations and political science academics.

SENAT 03/04/03 Question au gouvernement : Virus de la pneumopathie atypique. JO ASSEMBLEE NATIONALE 14/09/04 Au sommaire: QE N° 22131; santé - épidémies - système de prévention. bilan et perspectives (conc. FOREIGN POLICY 22/10/14 How to Shut Down a Country and Kill a Disease China’s response to SARS a decade ago was effective but brutal. Is there a better way to stop the spread of Ebola? With every passing day the absence of a powerful international response to West Africa's Ebola epidemic allows the horror to grow, pushing the nightmares in Liberia, Sierra Leone, and Guinea closer to the catastrophic worst-case scenario forecasted by the U.S.

Centers for Disease Control and Prevention: an estimated 1.4 million cumulative cases, with 980,000 dead, by Feb. 1, 2015 -- a prediction so dire as to be impossible to imagine. For Liberia and Sierra Leone, the dire augury translates to this: In the absence of radical measures to stop the virus's spread, the two countries could witness a combined 10,000 new cases per week by the time Americans sit down for Thanksgiving feasts, and they could see some 14 percent of their populations perish by Easter. What is to be done? A dramatic new study from a team of Virginia-based researchers dissects the current rates of the spread of Ebola and the likely impact of various strategies for controlling the epidemic. Lessons From a Dark Time. Académie des sciences - Académie nationale de médecine - Juin 2004 - Virus, agents transmissibles non conventionnels et barrière. Rapport du Groupe de travail du CSHPF : "Rapatriement et SRAS" (CSHPF, 14 janvier 2005)