EUREKALERT 29/09/20 Two pesticides approved for use in US harmful to bees (flupyradifurone et sulfoxaflor) A previously banned insecticide, which was approved for agricultural use last year in the United States, is harmful for bees and other beneficial insects that are crucial for agriculture, and a second pesticide in widespread use also harms these insects. 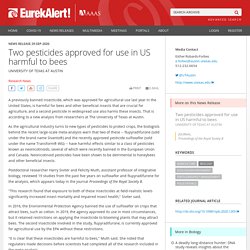 That is according to a new analysis from researchers at The University of Texas at Austin. As the agricultural industry turns to new types of pesticides to protect crops, the biologists behind the recent large-scale meta-analysis warn that two of these -- flupyradifurone (sold under the brand name Sivanto®) and the recently approved pesticide sulfoxaflor (sold under the name Transform® WG) -- have harmful effects similar to a class of pesticides known as neonicotinoids, several of which were recently banned in the European Union and Canada. 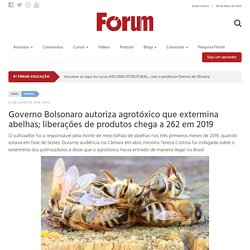 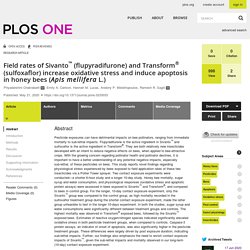 Flupyradifurone is the active ingredient in Sivanto™ and sulfoxaflor is the active ingredient in Transform®. They are both relatively new insecticides developed with an intent to reduce negative effects on bees, when applied to bee-attractive crops. With the growing concern regarding pollinator health and pollinator declines, it is important to have a better understanding of any potential negative impacts, especially sub-lethal, of these pesticides on bees. 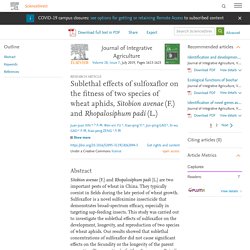 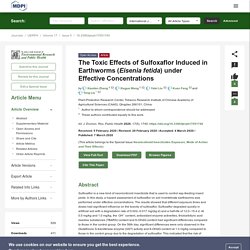 In this study, a hazard assessment of sulfoxaflor on soil invertebrate earthworms was performed under effective concentrations. The results showed that different exposure times and doses had significant influence on the toxicity of sulfoxaflor. Sulfoxaflor degraded quickly in artificial soil with a degradation rate of 0.002–0.017 mg/(kg·d) and a half-life of 12.0–15.4 d. At 0.5 mg/kg and 1.0 mg/kg, the ·OH− content, antioxidant enzyme activeities, thiobarbituric acid reactive substances (TBARS) content and 8-OHdG content had significant differences compared to those in the control group.

On the 56th day, significant differences were only observed in the Glutathione S-transferase enzyme (GST) activity and 8-OHdG content at 1.0 mg/kg compared to those in the control group due to the degradation of sulfoxaflor. INSECTS 10/02/20 Sulfoxaflor Residues in Pollen and Nectar of Cotton Applied through Drip Irrigation and Their Potential Exposure to Apis mellifera L. Systemic insecticides have been applied through drip irrigation for controlling crop pests, but few studies have addressed potential negative effects of the application on non-target organisms. 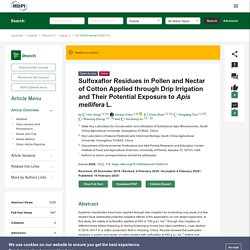 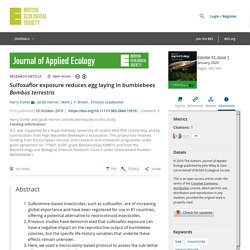 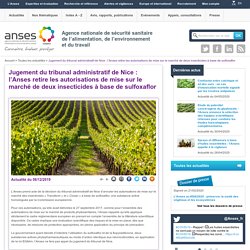 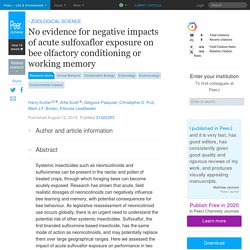 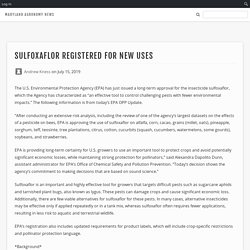 Environmental Protection Agency (EPA) has just issued a long-term approval for the insecticide sulfoxaflor, which the Agency has characterized as “an effective tool to control challenging pests with fewer environmental impacts.” The following information is from today’s EPA OPP Update. “After conducting an extensive risk analysis, including the review of one of the agency’s largest datasets on the effects of a pesticide on bees, EPA is approving the use of sulfoxaflor on alfalfa, corn, cacao, grains (millet, oats), pineapple, sorghum, teff, teosinte, tree plantations, citrus, cotton, cucurbits (squash, cucumbers, watermelons, some gourds), soybeans, and strawberries.

EPA is providing long-term certainty for U.S. growers to use an important tool to protect crops and avoid potentially significant economic losses, while maintaining strong protection for pollinators,” said Alexandra Dapolito Dunn, assistant administrator for EPA’s Office of Chemical Safety and Pollution Prevention. Land Use Policy Volume 75, June 2018, Reducing damages from sulfoxaflor use through mitigation measures to increase the protection of pollinator species. INSECTS 30/07/19 Sulfoxaflor and Natural Pyrethrin with Piperonyl Butoxide Are Effective Alternatives to Neonicotinoids against Juveniles of Philaenus spumarius, the European Vector of Xylella fastidiosa.

The threat imposed by the bacterial pathogen Xylella fastidiosa to crops of utter importance to European agriculture such as olive, stone fruit and grapevine calls for immediate research against the meadow spittlebug, Philaenus spumarius (L.), the main European vector. Management tools should consider reducing juveniles of vector populations growing on weeds or cover crops during spring as nymphs have limited movement and do not contribute to disease spread.

This decision is backed by substantial data and ensures that when used according to the label, sulfoxaflor poses no significant risk to human health and lower risk to non-target wildlife, including pollinators, than registered alternatives. Sulfoxaflor is an effective tool for growers that has a lower environmental impact because it disappears from the environment faster than widely-used alternatives like neonicotinoids.

The study provides evidence that selective insecticides like sulfoxaflor could play a larger role in integrated pest management, which attempts to minimize the adverse impact on beneficial insects while effectively controlling pests. "This study provides the first evaluation of the compatibility of novel selective insecticide with natural enemies for management of A. glycines in soybean production," the authors wrote. "Because management of A. glycines in the north central United States currently relies primarily on foliar applications of only two modes of action (pyrethroid and organophosphate insecticides), there is risk of A. glycines developing insecticide resistance.

EPA - NOV 2015 - Sulfoxaflor-Final Cancellation Order. EPA 17/05/16 Proposed Decision to Register the Insecticide Sulfoxaflor with Reduced Uses. Following the decision of the Ninth Circuit Court of Appeals, EPA has reevaluated the data supporting the use of sulfoxaflor and is now proposing to approve an amended registration with fewer uses and additional requirements that will protect bees. The proposed registration is very protective of pollinators and includes fewer crops than were allowed under sulfoxaflor's previous registration. For those crops that are included and that are bee-attractive, sulfoxaflor would be applied only post-bloom, when bees are not expected to be present. Other requirements are designed to prevent spray drift. In addition to requesting comment on the proposed registration of sulfoxaflor, EPA is also seeking public comment on two additional restrictions that may be added to the final label.

One would require a buffer when there is blooming vegetation bordering the field. PARLEMENT EUROPEEN - Réponse à question E-005021-16 Sulfoxaflor insecticide. The insecticide sulfoxaflor was approved on 18 August 2015, even though the European Food Safety Authority (EFSA) had concluded that the available data were insufficient to rule out a high risk to honey bees. EFSA also noted that data which would allow a robust assessment of all aspects of honey bee health were lacking.

This is in stark contrast not only to decisions taken in other countries, but also to the partial banning of insecticides with a similar mode of action in the EU. According to the EU pesticides database, authorisation is in progress in five countries (Austria, Bulgaria, the Czech Republic, Ireland and the Netherlands). 1. How coherent is the EU's decision to authorise a bee-harming pesticide which has been banned for the abovementioned reasons in the USA and Japan, especially given the Commission's claims that EU legislation on pesticides is the most advanced in the world? Arthropod Management Tests 2012, Vol. 37 FOLIAR APPLICATIONS OF SULFOXAFLOR, BYI02960, AND SOME COMMONLY USED INSECTICIDES FOR CONTROL OF ASIAN CITRUS PSYLLID AND CITRUS LEAFMINER IN ORANGES: SUMMER, 2011. EPA 06/05/13 Pesticide News Story: The EPA’s Final Decision on the New Active Ingredient Sulfoxaflor. For Release: May 6, 2013. PARLEMENT EUROPEEN - Réponse à question E-013884-15 Les abeilles et sulfoxaflor.

Sulfoxaflor; Pesticide Tolerances for Emergency Exemptions. This regulation is effective January 28, 2015. Objections and requests for hearings must be received on or before March 30, 2015, and must be filed in accordance with the instructions provided in 40 CFR part 178 (see also Unit I.C. of the SUPPLEMENTARY INFORMATION). WIKIPEDIA - Sulfoxaflor. PPDB: Pesticide Properties DataBase - GENERAL INFORMATION for sulfoxaflor.