GENETIC LITERACY PROJECT 29/11/16 Nigeria expected to introduce GMO rice, bean and sorghum crops within 2 years. GM WATCH 19/12/14 US growers move towards sorghum due to its non-GMO appeal. China’s voracious appetite for the grain stems from the country’s rejection of certain varieties of GM corn As GMWatch has long predicted, the GMO industry has effectively "junked" the US corn crop by genetically modifying it. 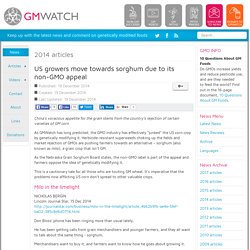 Herbicide-resistant superweeds choking up the fields and market rejection of GMOs are pushing farmers towards an alternative – sorghum (also known as milo), a grain crop that isn't GM. As the Nebraska Grain Sorghum Board states, the non-GMO label is part of the appeal and farmers oppose the idea of genetically modifying it. This is a cautionary tale for all those who are touting GM wheat.

Highlights SbLRR2 expression is inducible by pathogen and methyl-jasmonate in sorghum seedlings. 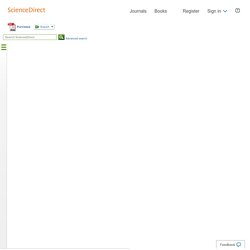 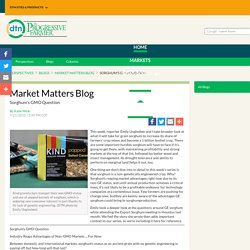 Schneider Electric strives to collect, use, and disclose personal information in a manner consistent with the laws of the countries in which it does business and has a tradition of upholding the highest ethical standards in its business practices. When you connect to or access this website (hereinafter the “Site”), you agree to be bound by the general terms of use set out below, as well as any specific terms mentioned on certain pages within this Site, as updated from time to time. 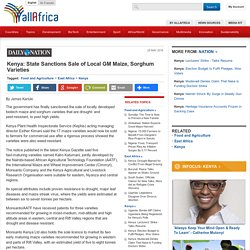 Kenya Plant Health Inspectorate Service (Kephis) acting managing director Esther Kimani said the 17 maize varieties would now be sold to farmers for commercial use after a rigorous process showed the varieties were also weed-resistant. The notice published in the latest Kenya Gazette said five fast-maturing varieties named Kalro Katumani, jointly developed by the Nairobi-based African Agricultural Technology Foundation (AATF), the International Maize and Wheat Improvement Center (Cimmyt), Monsanto Company and the Kenya Agricultural and Livestock Research Organisation were suitable for eastern, Nyanza and central regions. Its special attributes include proven resistance to drought, major leaf diseases and maize streak virus, where the yields were estimated at between six to seven tonnes per hectare. 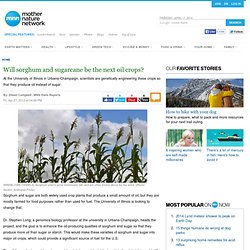 The University of Illinois is looking to change that. Dr. Stephen Long, a genomics biology professor at the university in Urbana-Champaign, heads the project, and the goal is to enhance the oil-producing qualities of sorghum and sugar so that they produce more oil than sugar or starch. This would make these varieties of sorghum and sugar into major oil crops, which could provide a significant source of fuel for the U.S.

The oil these plants would produce would mainly be used for jet fuel and biodiesel, but this could still make a significant impact on the fuel economy of the U.S. Using sorghum and sugar as oil crops would be beneficial in many ways, but there is also controversy surrounding the idea. Overall, this is a very promising project, and if it's successful, it will be big news. INTECH 07/03/12 Genetic Transformation of Immature Sorghum Inflorescence via Microprojectile Bombardment. Rosangela L. 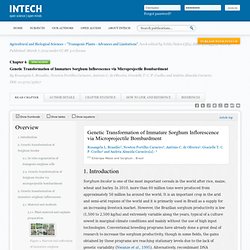 Brandão1, Newton Portilho Carneiro1, Antônio C. de Oliveira1, Gracielle T. C. P. Coelho1 and Andréa Almeida Carneiro[a] - 1 1. Sorghum bicolor is one of the most important cereals in the world after rice, maize, wheat and barley. However, unlike others Poaceae, sorghum transformation has been a challenge mainly due to recalcitrance in tissue culture and long periods of selection required for the recovery and regeneration of putative transgenic plants (Casas et al., 1993, Zhao et al., 2000; Jeoung et al., 2002; Howe et al., 2005). Even though the efficiency of sorghum transformation using the microprojectile bombardment had been improved, by all this studies, since the initial experiments (from 0,3 to 1,3%), it is still low if compared with the efficiency of sorghum transformation mediated by Agrobacterium tumefaciens from 2.1% – 4.5% (Zhao et al., 2000; Gao et al., 2005; Howe et al., 2006). 2. 2.1. 2.2.

LIGADOSMCS 21/10/12 South Africa Must License Analysis Lab on Genetically Modified Sorghum. Prof. Florence Wambugu, a renowned agricultural biotechnologist and the founder of Africa Harvest Biotech Foundation International, is at the moment entangled in a row with the South African government more than her strategy to set up a multimillion dollar study laboratory and greenhouses to develop genetically modified sorghum. Prof. Wambugu has received a large grant – US$415 million – from Bill and Melinda Gates Foundation, to develop genetically modified crops, which have proved important in alleviating food insecurity. Her selection of South Africa stems from the fact that its the only African nation with Biosafety laws. South Africas early enactment of biosafety laws has made it the preferred destination for biotechnology investors. 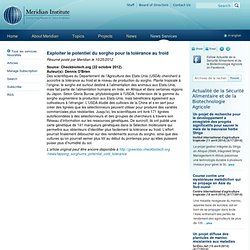 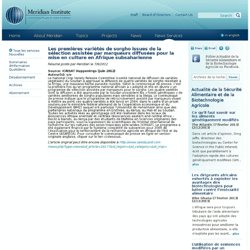 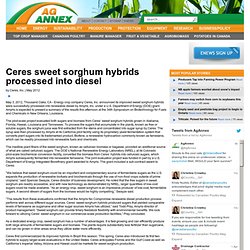 Department of Energy (DOE) grant. Amyris is expected to present a summary of the results this afternoon at the 34th Symposium on Biotechnology for Fuels and Chemicals in New Orleans, Louisiana. The pilot-scale project evaluated both sugars and biomass from Ceres’ sweet sorghum hybrids grown in Alabama, Florida, Hawaii, Louisiana and Tennessee. To process the sugars that accumulate in the plants, known as free or soluble sugars, the sorghum juice was first extracted from the stems and concentrated into sugar syrup by Ceres. The inedible plant fibers of the sweet sorghum, known as cellulosic biomass or bagasse, provided an additional source of what are called cellulosic sugars. As a dedicated energy crop, sweet sorghum has a number of advantages. ICRISAT - 2012 - Adaptive values of wild X cultivated sorghum (Sorghum bicolor (L.) Moench) hybrids in generations F1, F2, and F. Muraya, M M and Geiger, H H and Sagnard, F and Toure, L and Traore, P C S and Togola, S and de Villiers, S and Parzies, H K (2012) Adaptive values of wild X cultivated sorghum (Sorghum bicolor (L.) 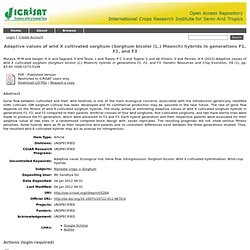 Moench) hybrids in generations F1, F2, and F3. Genetic Resources and Crop Evolution, 59 (1). pp. 83-93. ISSN 1573-5109 Gene flow between cultivated and their wild relatives is one of the main ecological concerns associated with the introduction genetically modified (GM) cultivars. AGBIO_ORG_ZA 13/08/10 GM Sorghum: Africa's Golden Rice. URBANORGANICNEWS 14/05/12 Genetically Modified Crops Threaten Gluten Free Sorghum. Plans for More Genetically Modified Crops Threaten Gluten Free Sorghum Sorghum is a staple food crop that feeds millions of people in Africa and Asia. It is a popular breakfast cereal grain in most countries, except the United States. Sorghum is a gluten free grain that allows people with celiac disease or a gluten intolerance to eat it without getting sick. Sorghum flour can be used to make foods like breads and cereals that are similar to products made with wheat and other grains that contain gluten, a protein that is causes an autoimmune response in people with a sensitivity.