ASSEMBLY_WALES - APRIL 2015 - The Horsemeat Scandal: Progress Made. INSTITUTE OF FOOD RESEARCH 02/12/14 IFR announces new test for detecting horse meat. Scientists at the Institute of Food Research on the Norwich Research Park have teamed up with Oxford Instruments to develop a fast, cheap alternative to DNA testing as a means of distinguishing horse meat from beef. 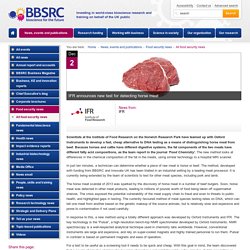 Because horses and cattle have different digestive systems, the fat components of the two meats have different fatty acid compositions, as the team report in the journal 'Food Chemistry'. The new method looks at differences in the chemical composition of the fat in the meats, using similar technology to a hospital MRI scanner. In just ten minutes, a technician can determine whether a piece of raw meat is horse or beef. The method, developed with funding from BBSRC and Innovate UK has been trialled in an industrial setting by a leading meat processor. It is currently being extended by the team of scientists to test for other meat species, including pork and lamb. 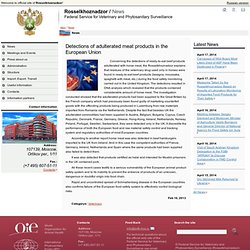 The detections resulted in DNA analysis which revealed that the products contained considerable amount of horse meat. The investigation conducted showed that the adulterated products had been supplied to the Great Britain by the French company which had previously been found guilty of marketing counterfeit goods with the offending products being produced in Luxemburg from raw materials imported from Romania via the Netherlands.

NSW FOOD AUTHORITY 13/02/13 EU horse meat substitution. NHS 11/02/13 Official advice about horsemeat safety released. Friday February 15 2013 Some processed meats have been contaminated by horsemeat On February 14 the Food Standards Agency (FSA) released a statement that it had detected the presence of phenylbutazone (bute) in horses slaughtered in the UK. 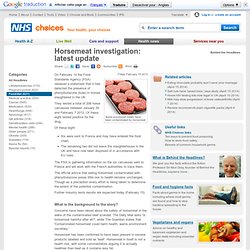 They tested a total of 206 horse carcasses between January 30 and February 7 2013. Of these, eight tested positive for the drug. Of these eight: Six were sent to France and may have entered the food chain. The FSA is gathering information on the six carcasses sent to France and will work with the French authorities to trace them. The official advice that eating horsemeat contaminated with phenylbutazone poses little risk to health remains unchanged. Further industry tests results are expected today (February 15). 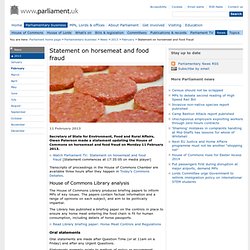 Watch Parliament TV: Statement on horsemeat and food fraud [Statement commences at 17:35:05 on media player] Transcripts of proceedings in the House of Commons Chamber are available three hours after they happen in Today’s Commons Debates. The House of Commons Library produces briefing papers to inform MPs of key issues. The papers contain factual information and a range of opinions on each subject, and aim to be politically impartial. The Library has published a briefing paper on the controls in place to ensure any horse meat entering the food chain is fit for human consumption, including details of horse passports. Read Library briefing paper: Horse Meat Controls and Regulations Oral statements Oral statements are made after Question Time (or at 11am on a Friday) and after any Urgent Questions. 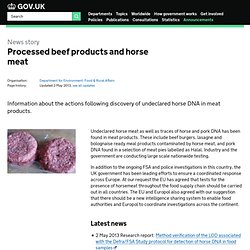 These include beef burgers, lasagne and bolognaise ready meal products contaminated by horse meat, and pork DNA found in a selection of meat pies labelled as Halal. Industry and the government are conducting large scale nationwide testing. In addition to the ongoing FSA and police investigations in this country, the UK government has been leading efforts to ensure a coordinated response across Europe. At our request the EU has agreed that tests for the presence of horsemeat throughout the food supply chain should be carried out in all countries. The EU and Europol also agreed with our suggestion that there should be a new intelligence sharing system to enable food authorities and Europol to coordinate investigations across the continent. Latest news See also: Food labelling and food safety Our priority remains to protect UK consumers. Products known to be affected have been withdrawn from sale. HOUSE OF COMMONS 12/02/13 Contamination of Beef Products - Eighth Report of Session 2012–13.