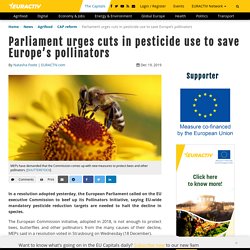 The European Commission initiative, adopted in 2018, is not enough to protect bees, butterflies and other pollinators from the many causes of their decline, MEPs said in a resolution voted in Strasbourg on Wednesday (18 December). Intensive farming, pesticides, climate change, land-use changes, loss of habitat and invasive species are among the factors leading to the current fall in biodiversity. Since 1992, grassland butterflies and pollinators have declined by about 40%, according to the European Environment Agency (EEA).

The European Parliament welcomed the EU Pollinators Initiative but highlighted that, as it stands, it is not sufficient to protect bees and other pollinators. Call for mandatory targets. Aise a-t-elle fauté? La justice a tranché DATA 11/07/19 Wild Bee Toxicity Data for Pesticide Risk Assessments. 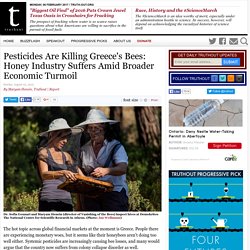 Sofia Gounari and Maryam Henein (director of Vanishing of the Bees) inspect hives at Demokritos The National Centre for Scientific Research in Athens. (Photo: Jan Wellmann) The hot topic across global financial markets at the moment is Greece. People there are experiencing monetary woes, but it seems like their honeybees aren't doing too well either.

Systemic pesticides are increasingly causing bee losses, and many would argue that the country now suffers from colony collapse disorder as well. The air smells of smoke and lemons, and the cicadas chirp steadily as I come upon 16 beehives clustered together in a dry field. The scent in the air is coming from lemon balm leaves, which associate researcher and apiculturist, Dr. "In the past, beekeepers added lemon juice in melted wax to attract swarms," says the 52-year-old. When I ask her if we can look at the bees, she expresses concern about my attire: a casual combination of shorts and a tank top. MTT Agrifood Research Finland - 2014 - Impact of use of neonicotinoid insecticides on honey bees in the cultivation on spring oilseed crops in Finland. GREENPEACE SUISSE 13/04/15 Etude scientifique européenne - Les pesticides tuent les abeilles. 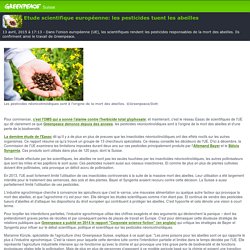 Information Update: 04/2010 Issued: 25 February 2010 On 23 February 2010 at Ely Magistrates Court Magistrates Court following proceedings taken by the Health and Safety Executive, Mr Russell Calne, a professional pest controller pleaded guilty to two counts of a “failure to take all reasonable precautions” when using a pesticide. The pesticide “Ficam D Dry Powder” contains the active substance bendiocarb and was used to treat a feral bee nest. Following his guilty plea Mr Calne was given a conditional discharge and ordered to pay £1,500 costs. Mr Calne operates a professional pest control business and was hired to treat a feral bee nest in the chimney of a family home. Mr Calne did not check whether anyone in the immediate vicinity kept bees and following Mr Calne’s treatments a neighbour’s hives were badly affected, with numerous honey bees dying leading to the complete loss of bees in one hive. 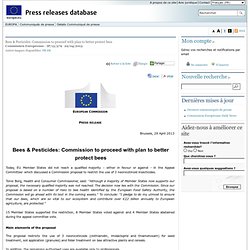 Tonio Borg, Health and Consumer Commissioner, said: "Although a majority of Member States now supports our proposal, the necessary qualified majority was not reached. 15 Member States supported the restriction, 8 Member States voted against and 4 Member States abstained during the appeal committee vote. Main elements of the proposal The proposal restricts the use of 3 neonicotinoids (clothianidin, imidacloprid and thiametoxam) for seed treatment, soil application (granules) and foliar treatment on bee attractive plants and cereals. In addition, the remaining authorised uses are available only to professionals. The restrictions will apply from 1 December 2013.