NATURE 04/08/21 A cocktail of pesticides, parasites and hunger leaves bees down and out. Worldwide, an estimated 20,000 species of wild and managed insects pollinate flowers, aiding plant reproduction1. 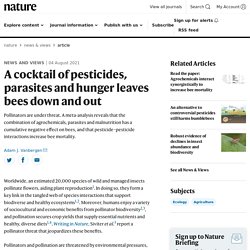 In doing so, they form a key link in the tangled web of species interactions that support biodiverse and healthy ecosystems1,2. Moreover, humans enjoy a variety of sociocultural and economic benefits from pollinator biodiversity2,3, and pollination secures crop yields that supply essential nutrients and healthy, diverse diets1,4. Writing in Nature, Siviter et al.5 report a pollinator threat that jeopardizes these benefits. Pollinators and pollination are threatened by environmental pressures, including many that are a consequence of human activity (Fig. 1). JOURNAL OF APPLIED ECOLOGY 07/04/21 Synergism between local‐ and landscape‐level pesticides reduces wild bee floral visitation in pollinator‐dependent crops. Ecotoxicology and Environmental Safety Volume 208, 15 January 2021 Toxic responses of blue orchard mason bees (Osmia lignaria) following contact exposure to neonicotinoids, macrocyclic lactones, and pyrethroids. 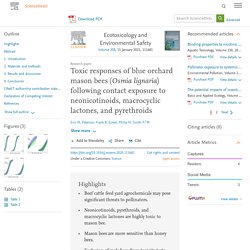 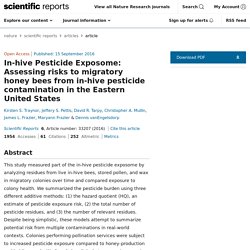 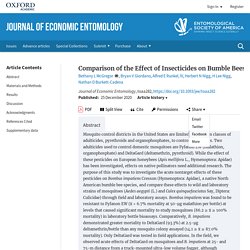 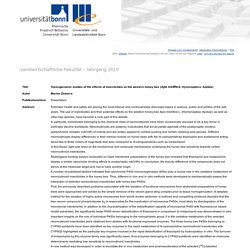 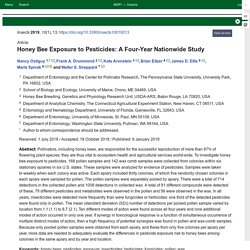 Introduction Pollinators, including honey bees, are responsible for the successful reproduction of more than 87% of flowering plant species: therefore, they are vital to ecosystem health and agricultural services world-wide [1]. Agriculture depends strongly on the services of the honey bee, which is responsible for providing more than 90% of commercial pollination services [2]. Thus, elevated loss rates seen in managed honey bee colonies [3] threatens the pollination services they provide. 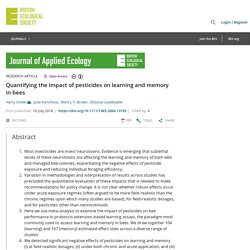 Habitat loss, an increase in the prevalence of bee pathogens, the spread of invasive species, and climate change have all been implicated as potential drivers (Brown & Paxton, 2009; Cameron et al., 2011; Goulson et al., 2015; Kerr et al., 2015; Potts et al., 2010; Winfree, Aguilar, Vázquez, Lebuhn, & Aizen, 2009; Woodcock et al., 2016). Recently, considerable attention has also been devoted to the contribution of agricultural pesticides, and particularly neonicotinoids, which are present in the nectar and pollen of treated crops and nearby wildflowers, and thus in colony food‐stores (Mitchell et al., 2017; Simon‐Delso et al., 2015). 2.1 Scope and search strategy.

Insects 2019, 10(1), Combined Toxicity of Insecticides and Fungicides Applied to California Almond Orchards to Honey Bee Larvae and Adults. Beekeepers providing pollination services for California almond orchards have reported observing dead or malformed brood during and immediately after almond bloom—effects that they attribute to pesticide exposure. The objective of this study was to test commonly used insecticides and fungicides during almond bloom on honey bee larval development in a laboratory bioassay. In vitro rearing of worker honey bee larvae was performed to test the effect of three insecticides (chlorantraniliprole, diflubenzuron, and methoxyfenozide) and three fungicides (propiconazole, iprodione, and a mixture of boscalid-pyraclostrobin), applied alone or in insecticide-fungicide combinations, on larval development. 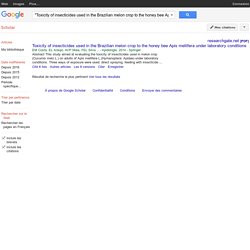 APVMA_GOV_AU - FEV 2014 - Overview report - neonicotinoids and the health of honey bees in Australia. February 2014 The APVMA has completed a broad overview of issues relating to honeybee health in Australia, with a particular focus on the use of neonicotinoid ('neonics') insecticides. 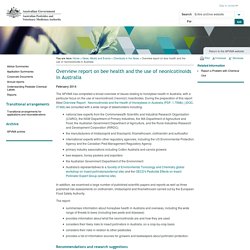 During the preparation of this report titled Overview Report - Neonicotinoids and the Health of Honeybees in Australia (PDF, 1.75Mb) | (DOC, 374kb) we consulted with a wide range of stakeholders including: In addition, we examined a large number of published scientific papers and reports as well as three published risk assessments on clothianidin, imidacloprid and thiamethoxam carried out by the European Food Safety Authority.

The report: Recommendations and research suggestions This overview report makes several recommendations to external agencies/organisations as part of a wider risk management strategy for the use of insecticides. Next steps As our assessment progresses or when significant new information becomes available, we will update our website. Further information: Front Physiol. 2013; 4: 352. Assessing homing failure in honeybees exposed to pesticides: Guez's (2013) criticism illustrates pitfalls and challenges. MOTHER JONES 14/05/15 Bee Die-Offs Are Worst Where Pesticide Use Is Heaviest. The nation's honeybee crisis has deepened, with colony die-offs rising sharply over last year's levels, the latest survey from the US Department of Agriculture-funded Bee Informed Partnership shows. 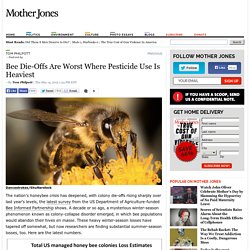 A decade or so ago, a mysterious winter-season phenomenon known as colony-collapse disorder emerged, in which bee populations would abandon their hives en masse. These heavy winter-season losses have tapered off somewhat, but now researchers are finding substantial summer-season losses, too. Here are the latest numbers. Chart: Bee Informed Partnership/University of Maryland/Loretta Kuo Note that total losses are more than double what beekeepers report as the "acceptable rate"—that is, the normal level of hive attrition.

And here's a map a map depicting where losses are heaviest: A growing weight of science implicated pesticides—particularly a ubiquitous class of insecticides called neonicitinoids, as well as certain fungicides—as likely factors. EPA / SANTE CANADA / CALIFORNIA DEPARTMENT OF PESTICIDE REGULATION 19/06/14 Guidance for Assessing Pesticide Risks to bees. PLOS 08/01/14 Four Common Pesticides, Their Mixtures and a Formulation Solvent in the Hive Environment Have High Oral Toxicity to Honey Bee Larvae. Recently, the widespread distribution of pesticides detected in the hive has raised serious concerns about pesticide exposure on honey bee (Apis mellifera L.) health. A larval rearing method was adapted to assess the chronic oral toxicity to honey bee larvae of the four most common pesticides detected in pollen and wax - fluvalinate, coumaphos, chlorothalonil, and chloropyrifos - tested alone and in all combinations.

All pesticides at hive-residue levels triggered a significant increase in larval mortality compared to untreated larvae by over two fold, with a strong increase after 3 days of exposure. Among these four pesticides, honey bee larvae were most sensitive to chlorothalonil compared to adults.

Bulletin of insectology - 2013 - Reduction in homing flights in the honey bee Apis mellifera after a sublethal dose of neonicoti. SCIENCE 10/05/13 Pesticides Under Fire For Risks to Pollinators. APINEWS 16/07/13 BRAZIL- ENZYMATIC BIOMARKERS AS TOOLS TO ASSESS ENVIRONMENTAL QUALITY: A CASE OF STUDY OF EXPOSURE OF THE HONEY. Paper prepared by Stephan M. Carvalho, Luc P. Belzunces, Geraldo A. Carvalho, Jean-Luc Brunet and Alexandra Badiou-Beneteau Abstract The present study was intended to evaluate the responses of enzymes in the honeybee Apis mellifera after exposure to deltamethrin, fipronil, and spinosad and their use as biomarkers.

2013 - Aspects determining the risk of pesticides to wild bees: risk profiles for focal crops on three continents. Basic and Applied Ecology, Volume 11, Issue 2, March 2010, Impacts of a pesticide on pollinator species richness at different sp. Abstract Pesticides are an important potential cause of biodiversity and pollinator decline. Little is known about the impacts of pesticides on wild pollinators in the field. Insect pollinators were sampled in an agricultural system in Italy with the aim of detecting the impacts of pesticide use. The insecticide fenitrothion was over 150 times greater in toxicity than other pesticides used in the area, so sampling was set up around its application. Species richness of wild bees, bumblebees and butterflies were sampled at three spatial scales to assess responses to pesticide application: (i) the ‘field’ scale along pesticide drift gradients; (ii) the ‘landscape’ scale sampling in different crops within the area and (iii) the ‘regional’ scale comparing two river basins with contrasting agricultural intensity.

Pesticide toxicity to bees. Pesticides vary in their effects on bees. Contact pesticides are usually sprayed on plants and can kill bees when they crawl over sprayed surfaces of plants or other media. Systemic pesticides, on the other hand, are usually incorporated into the soil or onto seeds and move up into the stem, leaves, nectar, and pollen of plants.[1] Dust and wettable powder pesticides tend to be more hazardous to bees than solutions or emulsifiable concentrates for contact pesticides. Int. J. Environ. Res. Public Health 2011, 8, 3844-3858 Detection of Pesticides in Active and Depopulated Beehives in Uruguay. Pest Manag Sci 63:1047–1050 (2007) In Focus: Pesticides and honeybees – the work of the ICP-BR Bee Protection Group Editorial.