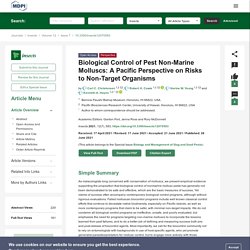 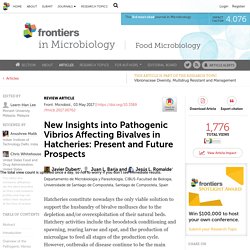 In this context, marine products are an essential part of the human diet as one of the main resources of animal protein and its worldwide consumption per capita has been duplicated since 1960. Nowadays, more than half of these products come from aquaculture due to the overexploitation of the traditional fisheries and this proportion will exceed 65% in 2030. Bivalves are one of the most important food products for the aquaculture industry and the worldwide production (mainly oysters, mussels, clams and scallops) was close to 14 Mt with an economic value of more than $16 billion (FishStatJ, FAO). FIGURE 1. FIGURE 2. Clearly, microbiological aspects play an important role in the successful bivalve culture. 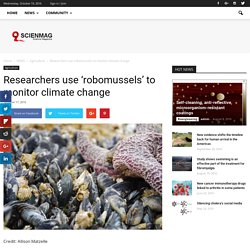 Developed by Northeastern University scientist Brian Helmuth, the "robomussels" have the shape, size, and color of actual mussels, with miniature built-in sensors that track temperatures inside the mussel beds. Advertisement For the past 18 years, every 10 to 15 minutes, Helmuth and a global research team of 48 scientists have used robomussels to track internal body temperature, which is determined by the temperature of the surrounding air or water, and the amount of solar radiation the devices absorb.

They place the robots inside mussel beds in oceans around the globe and record temperatures. The researchers have built a database of nearly two decades worth of data enabling scientists to pinpoint areas of unusual warming, intervene to help curb damage to vital marine ecosystems, and develop strategies that could prevent extinction of certain species. Media Contact. NATURE 31/08/16 Pathogenic marine microbes influence the effects of climate change on a commercially important tropical bivalve. Transboundary and Emerging Diseases 09/03/16 A Simple Model to Rank Shellfish Farming Areas Based on the Risk of Disease Introduction and Spread. 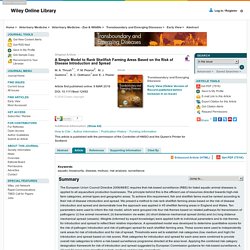 The principle behind this is the efficient use of resources directed towards high-risk farm categories, animal types and geographic areas. To achieve this requirement, fish and shellfish farms must be ranked according to their risk of disease introduction and spread. IFREMER - MAI 2014 - First description of French V. tubiashii strains pathogenic to mollusk: I. Characterization of isolates and detection during mortality events. Turkish Journal of Zoology 19/06/14 First report of some parasites from Mediterranean mussel, Mytilus galloprovincialis Lamarck, 1819, collected from the Black Sea coast at Sinop.

FUSION_NET 25/09/15 Study finds eating shellfish could mean eating ocean debris. Our manmade pollution is being eaten by fish, which are being eaten by us, creating a sad, karmic circle of garbage. 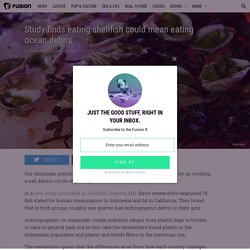 In a new study published in Scientific Reports, U.C. Davis researchers examined 76 fish slated for human consumption in Indonesia and 64 in California. They found that in both groups, roughly one quarter had anthropogenic debris in their guts. Anthropogenic—or manmade—ocean pollution ranges from plastic bags to bottles to cans to general junk, but in this case the researchers found plastic in the Indonesian population and plastic and textile fibers in the American one. The researchers guess that the differences arise from how each country manages waste.

Indonesia has little in the way of landfills, waste collection or recycling, and large amounts of plastic are tossed onto the beaches and into the ocean. Lead author Chelsea Rochman added that “to mitigate the issue in each location, it helps to think about local sources and differences in waste management strategies.” SCIENTIFIC REPORTS 24/09/15 Anthropogenic debris in seafood: Plastic debris and fibers from textiles in fish and bivalves sold for human consumption. Anthropogenic Debris in Fish Sampled from Indonesia From the Paotere Fish Market in Indonesia, we purchased 76 whole fish across 11 different species. 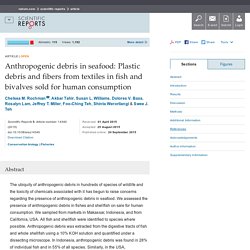