PATHOGENS 14/11/21 Molecular Evidence for Flea-Borne Rickettsiosis in Febrile Patients from Madagascar. FRONT. VET. SCI. 07/06/21 Molecular Detection and Characterization of Rickettsia Species in Ixodid Ticks Collected From Cattle in Southern Zambia. Introduction Vector–borne zoonotic pathogens are of increasing importance worldwide, with many reports of emerging and/or re-emerging pathogens being detected in invertebrate hosts (1). 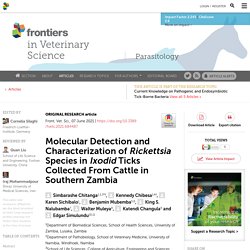 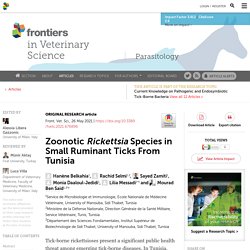 Spotted fever group Rickettsia (SFGR) is one among the aetiologies that cause fever of unknown origin in Angola. 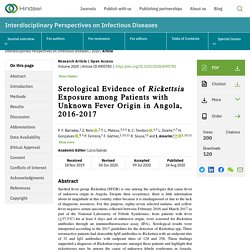 Despite their occurrence, there is little information about its magnitude in this country either because it is misdiagnosed or due to the lack of diagnostic resources. For this purpose, eighty-seven selected malaria- and yellow fever-negative serum specimens collected between February 2016 and March 2017 as part of the National Laboratory of Febrile Syndromes, from patients with fever (≥37.5°C) for at least 4 days and of unknown origin, were screened for Rickettsia antibodies through an immunofluorescence assay (IFA). Serological results were interpreted according to the 2017 guidelines for the detection of Rickettsia spp. Three seroreactive patients had detectable IgM antibodies to Rickettsia with an endpoint titre of 32 and IgG antibodies with endpoint titres of 128 and 256. 1. 2. 2.1. 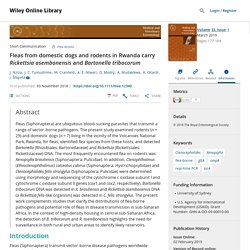 Among mammalian hosts harbouring fleas, rodents play a dominant role as a result of their close associations with humans, especially in populous rural areas (Gundi et al., 2012). With the exception of Yersinia pestis (Enterobacteriales: Enterobacteriaceae), the cause of plague, flea‐borne pathogens, such as Bartonella spp. and Rickettsia spp., remain neglected in sub‐Saharan Africa (Kumsa et al., 2014; Leulmi et al., 2014). Plague is now absent from several sub‐Saharan countries such as Rwanda; nevertheless, knowledge of the distribution of potential flea vectors of Y. pestis is relevant because of its potential re‐emergence from endemic regions such as the Democratic Republic of Congo (Stenseth et al., 2008; Amatre et al., 2009). 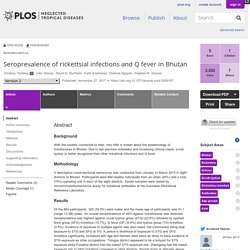 Due to two previous outbreaks and increasing clinical cases, scrub typhus is better recognized than other rickettsial infections and Q fever. Methodology A descriptive cross-sectional serosurvey was conducted from January to March 2015 in eight districts of Bhutan. Results Of the 864 participants, 345 (39.9%) were males and the mean age of participants was 41.1 (range 13–98) years. Conclusion.

PLOS 21/03/16 Diversity of Bartonella and Rickettsia spp. in Bats and Their Blood-Feeding Ectoparasites from South Africa and Swaziland. Abstract In addition to several emerging viruses, bats have been reported to host multiple bacteria but their zoonotic threats remain poorly understood, especially in Africa where the diversity of bats is important. 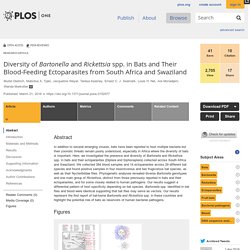 Here, we investigated the presence and diversity of Bartonella and Rickettsia spp. in bats and their ectoparasites (Diptera and Siphonaptera) collected across South Africa and Swaziland. We collected 384 blood samples and 14 ectoparasites across 29 different bat species and found positive samples in four insectivorous and two frugivorous bat species, as well as their Nycteribiidae flies. Phylogenetic analyses revealed diverse Bartonella genotypes and one main group of Rickettsia, distinct from those previously reported in bats and their ectoparasites, and for some closely related to human pathogens.

Our results suggest a differential pattern of host specificity depending on bat species. Parasites & Vectors 31/05/17 Serological and molecular detection of spotted fever group Rickettsia in a group of pet dogs from Luanda, Angola. To the best of our knowledge, this study shows for the first time the presence of SFGR in dogs in Luanda. 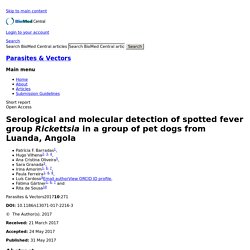 A considerably lower prevalence of IgG antibodies against Rickettsia spp. was found in dogs when compared with other studies that assessed serum samples from dogs [11] or people [16]. On the other hand, the molecular prevalence in the present study was also lower than in another study that assessed Rickettsia spp. in dogs from Nigeria [12]. Nevertheless, the low prevalence could be related to the fact that tick species that were infesting this group of dogs had a low prevalence of rickettsial infection. CDC - OCT 2013 - Rickettsia africae in Amblyomma variegatum Ticks, Uganda and Nigeria.

Highlight and copy the desired format. 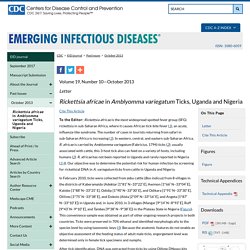 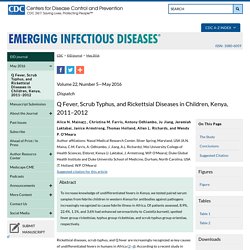 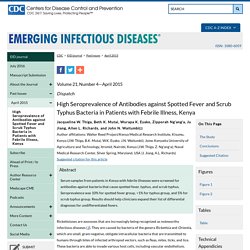 CDC EID - Volume 20, Number 10—October 2014. Au sommaire notamment: Borrelia garinii and Rickettsia monacensis in Ixodes ricinus Ticks, Algeria. Suggested citation for this article To the Editor: Lyme disease (Lyme borreliosis) is caused by a group of related spirochetes (Borrelia burgdorferi sensu lato) that include ≥11 species (1). In northern Africa, the main vector of Lyme disease in Europe (Ixodes ricinus ticks) is also present, and this disease has been suspected to be present in this region of Africa (2).

Oteo, A. Suggested citation for this article Abstract We report the identification of a nymphal nostril tick (Amblyomma sp.) from a national park visitor in Gabon and subsequent molecular detection and characterization of tickborne bacteria. Ticks are hematophagous arthropods that parasitize different species of vertebrates, and they serve as intermediate hosts for infectious pathogens that can have serious implications for humans. A 21-year-old female field worker from Spain visited Lopé National Park in Gabon (Africa) for 13 days during January–February 2014 to observe chimpanzees and gorillas.